I've died in thousands of ways over the years. While playing video games, of course. For example, just last night I jumped off a sniper tower and landed on a spiked fence in Metal Gear Survive. It was fun, to say the least.

Below are 12 of the best ways you can die while playing a game.

1. Bounce To Death (Prince of Persia)

Sometimes you just don't have a choice. Such was the case for this unfortunate guy who was hit by a bug that not only paralyzed his character, but sent him bouncing into the deep sand below. He looked an awful lot like this cat jumping out a window, actually. Meow.

So you're looking to test out the water physics in Resident Evil 4? Not so fast. There's something you need to kno... R.I.P.

Maybe I'm underestimating the power of birds, but there is absolutely no reason you should be pecked to death. Yet, while Claire Redfield is able to survive attacks by dozens of zombies and rabid dogs, she couldn't handle a couple crows flying her way. What a tragedy.

Also Read: 19 Facts About Space That Will Blow Your Mind

You haven't seen someone with bad luck until you've seen Roger Wilco in Space Quest. This guy manages to fall out into the vacuum of outer space, gets stuck in a hole, and gets crushed by a meteorite. This poor guy just can't win.

Apparently B. Orchid is quite the looker, because just a quick look at her chest is enough to send a werewolf to the grave.

If you're going to pour a bunch of gasoline near a gas station and then shoot it, make sure you aren't standing anywhere nearby.

It's one thing to die by falling face first, or to accidentally fall into a fire. But both in one sequence? And then on top of that to have the building explode is some seriously bad luck. Nice try, Spider-Man.

This guy's stupidity got his entire team absolutely obliterated.

If there's one thing you don't want to do when parachuting, it's forget to open your chute on-time. This guy paid the ultimate price for his bad timing.

If you're going to t-bag someone, make sure they aren't going to come back and throw a grenade into your pocket. Because that would just make you look silly (like these guys).

Sharks aren't apex predators for nothing. If you're going to go toe-to-toe, or in this case face-to-face, with a shark, you better have a huge harpoon on you. Your fists aren't going to do jack once that mouth opens and tries to devour you.

Part of this scene made me happy after listening to Albert Wesker deliver an annoyingly long monologue. Part of it made me disappointed that it ended so fast. 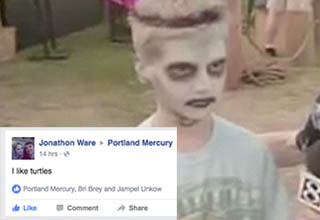