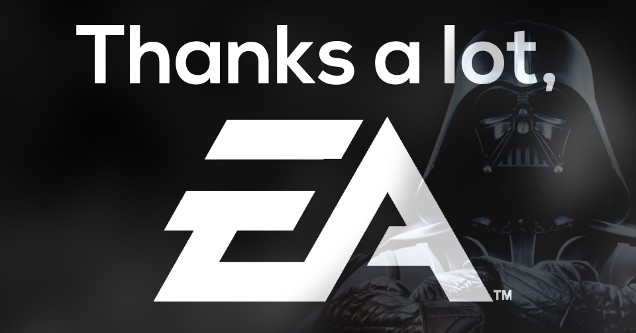 Star Wars: Battlefront 2's microtransactions were undoubtedly the biggest topic of controversy in gaming during 2017. But it wasn't the only misstep by EA, two time award recipient for Worst Company in America.

What you find when you look outside the scope of Star Wars: Battlefront 2 are a handful of horrible moments through the year that together make us want to cry. Below are five of the biggest miscalculations EA took during the year that should give the company good reason to tread lightly going forward.

Following the controversial conclusion to Mass Effect 3, you'd think EA would have been concerned about making sure the next Mass Effect game was as gamer-friendly as possible. Instead, it made huge missteps with bringing its big sci-fi franchise to new generation consoles.

Take for example its uninteresting plot that failed to develop any sort of emotional connection between the players and its characters, one of the greatest assets of prior games. Even if the writing was good, the voice acting was so laughably bad that there was no way anyone was ever going to take it seriously. I mean, just look at this scene.

A lot of that bad voice acting was due to EA hiring based on "diversity" instead of merit. So, you end up with a bunch of people that don't sound anything like their characters being hired for the sake of a progressive agenda. On paper it sounds like a nice thing to do, but in practice it just results in a completely disagreement between what you see and hear.

Don't even get me started on the animations. I've seen college projects that look more realistic than this. Apparently five years of development and $40 million doesn't go very far in this day and age.

The result of this mess is Mass Effect is officially on a hiatus. Thanks, EA. 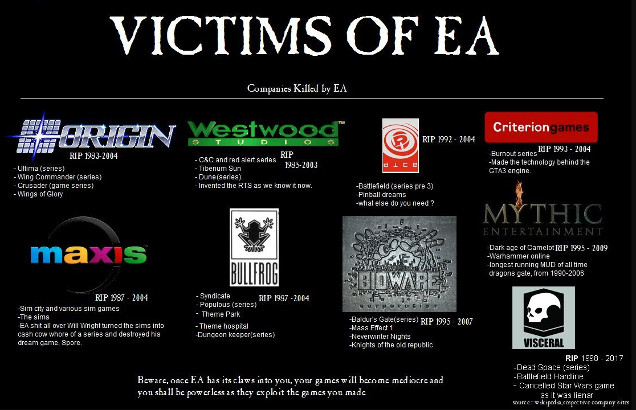 Toward the beginning of the holiday release storm concerns arose about how single-players games are becoming increasingly rare as the lucrativeness of multiplayer with microtransactions draws in the attention of AAA developers.

So, what does EA do? Shuts down one of its only development studios that focuses on single-player games: Visceral Games.

I really can't think of a worse timing for EA to have done this. It's almost as if it was purposefully trying to trigger games, but there's absolutely no way that's the case... right?

Visceral had a long history of successful releases, especially with the Dead Space games which are some of the only horror games with a AAA budget during the past decade. Although most people who played these games would say great things about the developer, apparently they didn't make EA enough money, so to the graveyard it went.

I don't know what it is about sports games, but they attract the kind of invasive microtransactions that make you just want to scream into a pillow. Chances are that you probably didn't hear about FIFA 18 and how it makes anyone who played it feel like they paid $59.99 for a free-to-play mobile game, and it definitely deserved more attention.

I'll put it simply: completely random card packs that usually give you garbage and cost $1.50 each. Want to play online and be competitive? You'll need to buy several of these, and count your wishes hoping to get something that won't make you wish you spent that money on Taco Tuesday.

Also Read: EA Is Paying An Enormous Price For Trying To Exploit Gamers

One guy on Reddit admitted to spending over $300 on cards since he wasn't finding anything good. While we have good reason to question his self-discipline, the fact that EA made something that preys on gambling addiction isn't cool.

It's so bad, in-fact, that a Change.org petition called #FixFifa has rallied a total of over 41,00 signatures. Of course, EA hasn't done anything to address the concerns. What else would you expect? 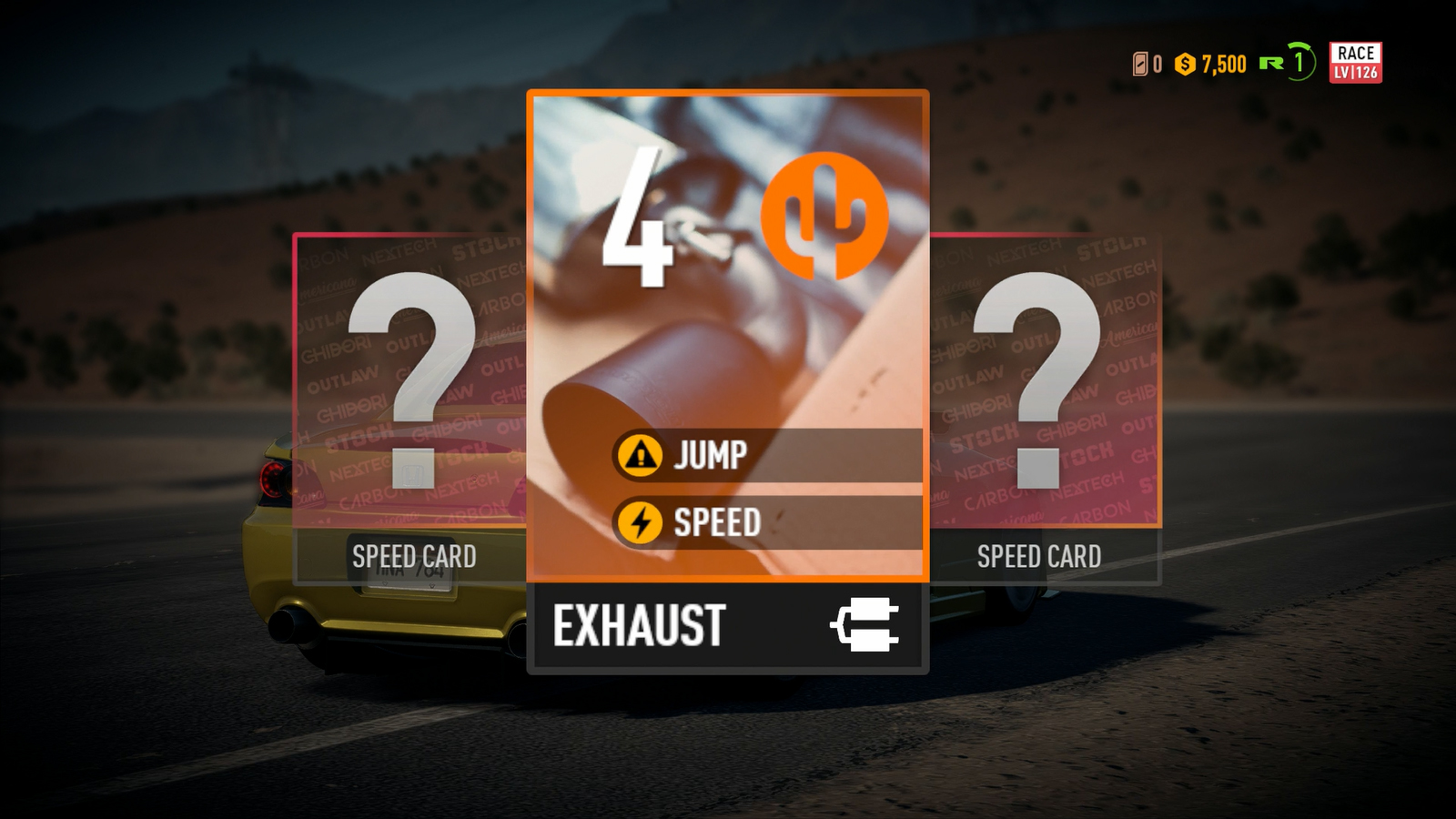 Continuing on its spree of making sure 2017 was a year to remember in the worst way possible, EA released Need for Speed Payback. This Fast and the Furious wannabe was a pretty terrible game with a forced single-player story that made us cringe so often that we had to pause the game every few minutes to regain ourselves.

On that point, tarnishing the Need for Speed name is a big party foul in and of itself. But that wasn't the worst thing about the game.

Just like FIFA 18, Need for Speed Payback had RNG oriented microtransactions that it tried desperately to lure you into, and employed gambling-style design to hook people into paying as much money as possible. You might have thought you paid $59.99 for a full game, but what you were really doing is inviting an EA salesperson into your living room.

The game was panned universally, resulting in the lowest average score for a Need for Speed game ever. Congratulations.

Look, I'm happy that console games can finally play The Sims 4. It's actually a decent game with some neat new ideas for the franchise.

But this port was poorly executed through and through. The graphics? Inconsistent. The control scheme? Framerate drops? Enough to make you nauseous. Gameplay? Have you ever tried using a keyboard & mouse interface with a controller?

Also See: 19 Funny EA Memes Calling The Company Out On Their BS

The controls in this game were absolutely awful, to a point where you had to get used to pausing the game frequently to give yourself enough time to perform simple tasks like asking your wife to cook a turkey for Thanksgiving. You're better off watching someone else play it on Twitch and then laughing at their misery.

And as you would expect there were plenty of microtransactions awaiting everyone who bought it. Actually, the total sum of DLC offered on day one was over $300, making sure you never felt like you had a full product.

Check out 7 other big controversies in gaming during 2017 here. 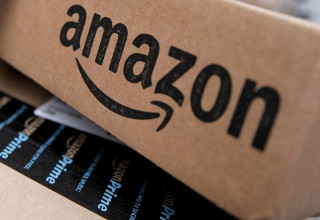