Adin Ross is a Twitch streamer with over 7 million followers, giving him access to some of society’s most sought after celebrities. He’s streamed with Lebron James and his son and has made appearances with the king of internet bullshit himself, Logan Paul. He was scheduled to top off his celebrity associations with the most famous rapper and unhinged anti-semite out there, Kanye West. On December 5th, Adin Ross tweeted, “tomorrow we break the internet…” in anticipation of the stream, but then canceled it a few days before.

Ross explained on a December 13th stream that he “didn’t want to give a platform for hate”, which seems to be what Kanye is all about these days. Adin himself was raised Jewish, so it was a questionable choice to invite Kanye on from the beginning. The streamer explained on the “Off the Record Podcast” to host DJ Akademiks, that Kanye DM’d him on Twitter, and after a phone call about the bible, the stream was set. After texting for a few days, Ross claims Kanye called him angrily stating “You Jews aren’t going to tell me what I can and cannot say.”

Adin Ross is no stranger to controversy. A big step forward in his view count came when he was “attacked” by bots and gained 3 million subscribers. He was banned from Twitch briefly in April 2021 after a friend of his was heard saying the F-slur, then banned again one year later for using the slur himself.

Regardless, since the Kanye controversy, he seems to be embroiled in a prank war with frenemy Andrew Tate, shaving his head, and smoking a cigar in sunglasses, Tate-style. They all seem like annoying people, but at least they’re not letting Kanye on the mic.

You’re gonna see a lot of change from me from here on out. I’ll tell ya. pic.twitter.com/TayNlwbINU 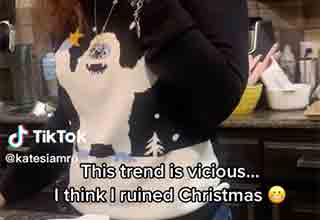