The internet has had a lot of fun with the trailer for Square Enix’s new fantasy game "Forspoken." The trailer shows off some interesting story elements, glimpses of the combat system, and a brief general sense of what gameplay might feel like. So what’s the issue?

For whatever reason, they decided to go with voice over dialogue that sounds like it was written by my twelve year old cousin with superpowers who just stumbled through the wardrobe to Narnia.

Welcome to the world of #Forspoken. pic.twitter.com/46diiLnQ7M

In what feels like a perfect merge between the trends of modern advertising and movie script writing, the trailer sounds like one of those spam mobile game ads. Except for the fact that it’s being produced by the 2 billion dollar company that brought us "Kingdom Hearts" and "Final Fantasy."

Fortunately, the people have risen up, and decided to fight back in the form of memes. Some of the results are absolutely hilarious.

For something I made on my phone in an hour I’m actually sorta proud of this https://t.co/JIww0MtS5t pic.twitter.com/kioBEl4B4w

A beautiful and war ravaged land? Elite monsters? An array of Arts? Fusions!?

So let me get this straight...
I'm somewhere in New Mexico
I'm seeing FREAKING drug lords
and - OH YEAH - I'm cooking meth
Yeah, okay, that is something I do now https://t.co/tUWojN2ipw pic.twitter.com/X7hpMXl7AQ

So let me get this straight... our editor has too much spare time...

"Yup, that's me. You're probably wondering how I got in this crazy situation. Well, it all started when this company of bad guys called the UAC got this not-so-bright idea to open a freakin' portal to Hell..." https://t.co/dY49NvA5jp pic.twitter.com/ZOgGnBn0Pv

Hopefully bigger companies will start to realize that this silly formulaic style of advertising only works for a certain audience, and we expect more from them. But in the meantime, we can laugh at the memes. 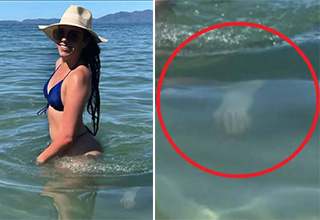 NEXT ARTICLE 'Ghost Hand' Captured at Beach Freaks Out the Internet