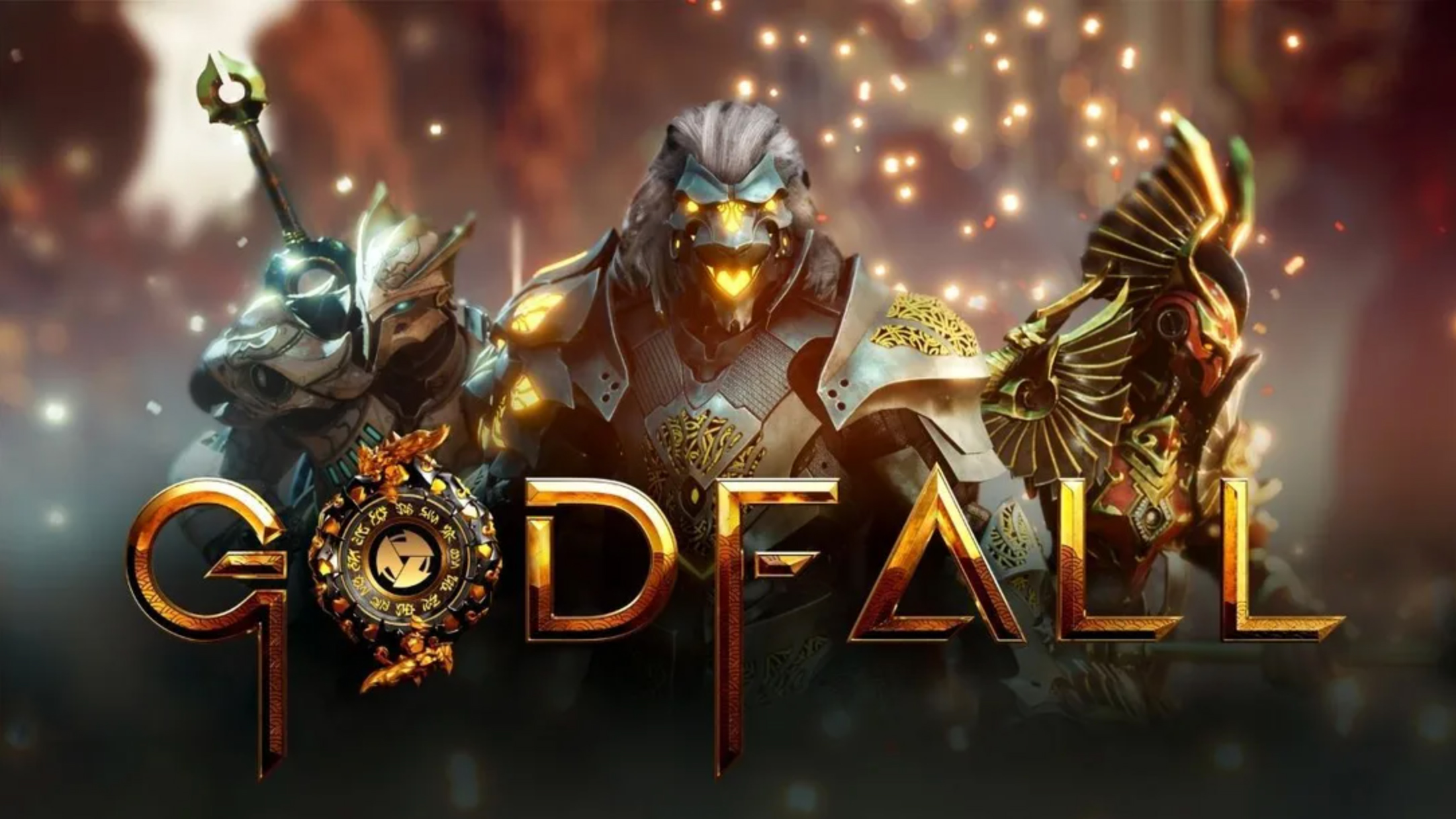 I'll be frank, this is the first video game review I've ever written. I've reviewed other things, but declaring whether or not a $60—or $70 on PS5—game is worth your time and money is new to me.

If you want a summary of all the rating scores for Godfall, the new "looter slasher" from Gearbox Publishing and Counterplay Games, click here.

But if you want to know how this game actually feels to play, and what reviewing a video game looks like from the inside, let's go step by step through this funny process to see what it takes to write your first video game review.

Step 1: Get a free copy of the game

It turns out PR people at video game publishing companies are really friendly and easy to get a hold of, and if you tell them you work at a relatively well-known website, they're happy to let you play their games for free.

The trickiest part is just finding the right person to email. In this case, I found the name of the contact person pretty easily by Googling "PR contact at [company name]." But his email address wasn't listed online, so it took me 30 minutes to figure out the email address format for the company before sending him a message.

Later that day I got a reply from a guy at a PR firm working for the game's publishing company, who said I could indeed receive an access code for Godfall.

Then I hit my first problem.

Step 2: Try to play the game

The game doesn't officially release until tomorrow, November 12th, and I was told I could publish my review today, November 11th, but unfortunately I wasn't going to receive my access code until November 9th.

That gave me two days to play as much of the game as possible and try to write a comprehensive review. And because I have to do a bunch of stuff on this website during the day, that really meant I had two nights to play the game and write the review if I wanted to get it out in time with other reviewers' reviews (which if you look at the timestamp on this post, you'll see I failed at by a few hours).

But putting in hours at night to play a free video game and blab about it is fun, so I got nothing to complain about there. 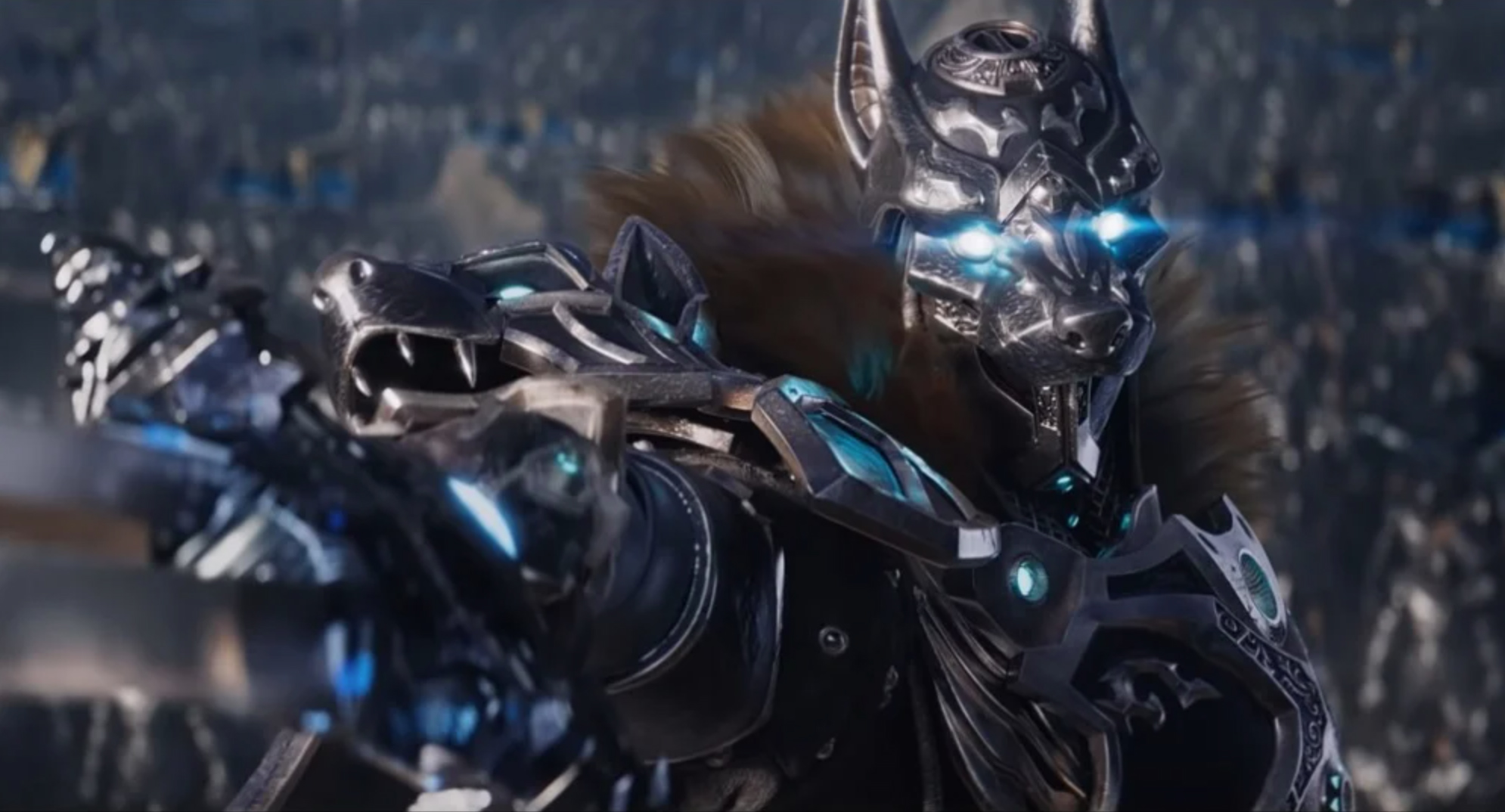 However, because I'm such a n00b, I didn't realize my computer can't actually handle running Godfall. My gaming PC is about as powerful as an old Nokia cellphone, and I stupidly assumed it could run a game that requires 16GB of RAM and a $700 graphics card.

My PC has maybe 1GB of RAM and the kind of stock graphics card most gamers would throw in the trash.

So I now had this free, brand new game, but nothing to play it on.

I tried finding a more experienced reviewer at the site to help, but they also didn't have powerful enough machines to run it. 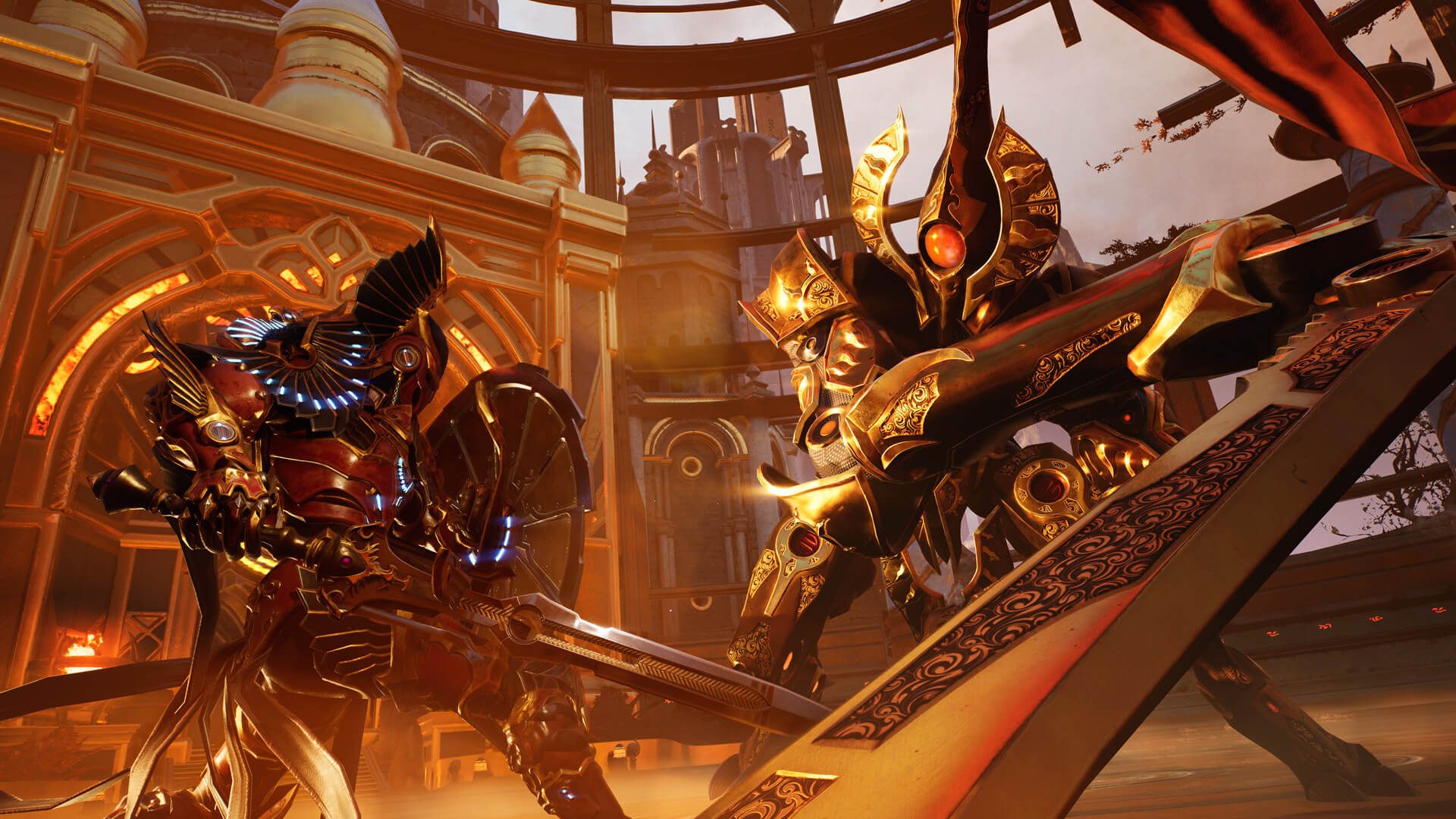 I understand now why diehard PC gamers are such pricks. They spend a minimum $1,000 on a machine to play the same games other people are playing on consoles that cost half as much (or less!).

After sinking that much money into something, you have no choice but to defend it with your life. The shame of admitting you could be getting the same (or very close to the same) experience on a console would be too great.

And if you're so attached to playing with a mouse and keyboard, just connect one to your PlayStation or XBox. Problem solved!

Step 3: Start playing the game the night before your review is due

Thankfully, I never had to tell the nice PR person who gave me this game that I was a total idiot. Because I was able to put together the most bootleg way to finally play it.

To play Godfall, I downloaded the game from the Epic store on a second computer and added it to my Steam library. Then I logged into that Steam account and used Remote Play it play it on my computer.

However, because my gaming PC is such a useless brick, I ended up playing the game on my Apple laptop. And because I hate playing with keyboard and mouse, I used Bluetooth to connect my PS4 controller.

So my experience with Godfall—Epic > Steam > Remote Play > Apple laptop > PS4 controller—may be slightly different than yours.

By the time I got everything set up to finally start playing last night, I was pumped to see what the hell this game is all about.

Unfortunately, because of my janky set up, I only made it through the first part of the game, where you run around a shiny golden "sun temple" cutting monsters with a big sword before the game started lagging.

I restarted my machine and did everything I could think of to keep the game moving, but at some point it slowed down so much it stopped responding to my button presses and my character died.

Step 4: Give up and write the review

Thankfully, the PR people were nice enough to send me a box of Godfall merch that included drinking glasses, coasters, a capture card, and a mold to make one giant ice cube ball.

Based solely on my merch and friendly emailing with the PR folks, I give Godfall a 10/10. Based on the gameplay, I have to go closer to 6/10. 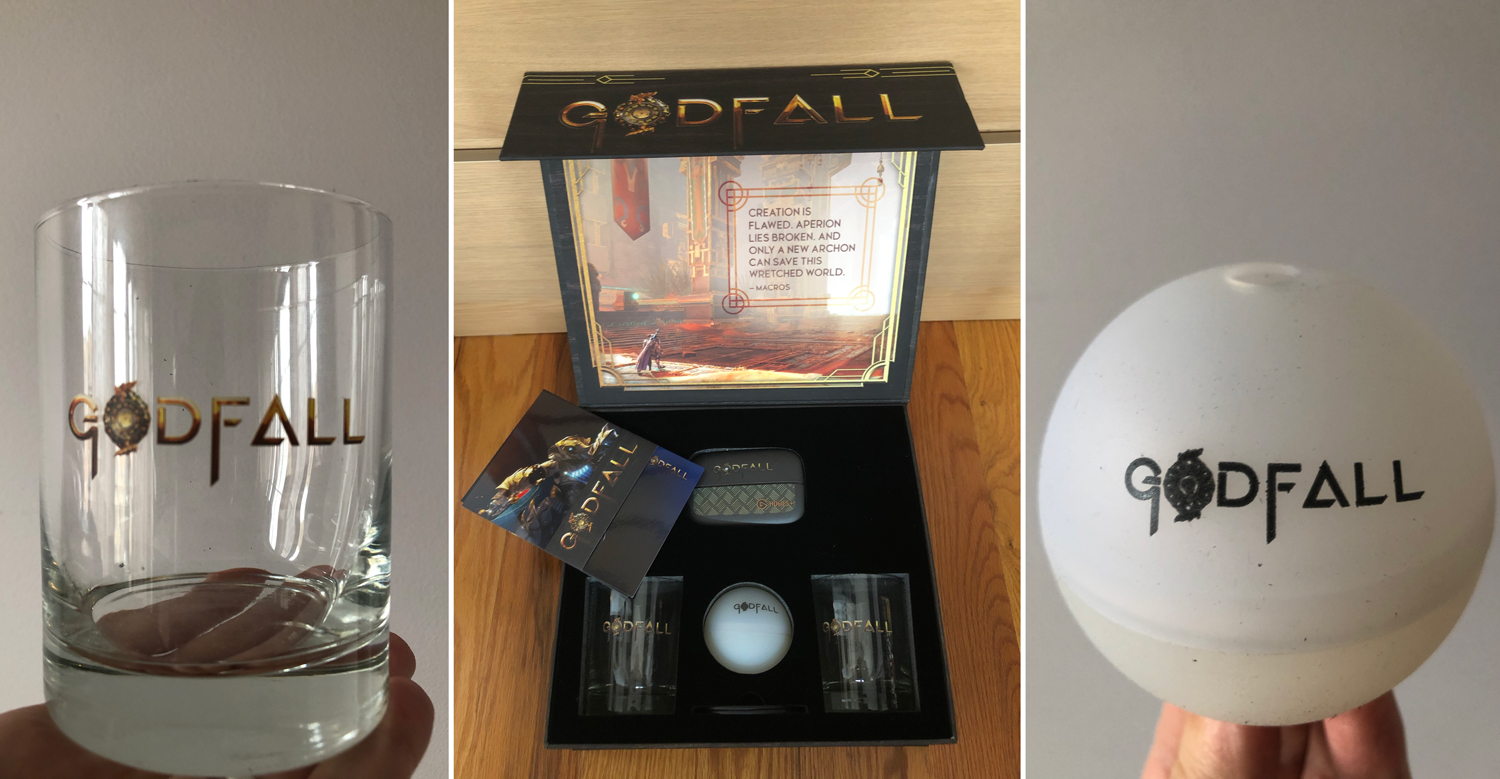 Even putting my stupid gaming setup aside, and the fact that I only played like 1% of the game, the mechanics were a little repetitive. It's a lot of hitting the attack button over and over again until the enemy explodes and leaves behind little blue and green balls for you to pick up.

There's also no jump button in the game. Instead you have this sorta magical invisible zip line system to transport yourself between platforms, which works fine, but I kinda wanted a jump button.

I don't think there's a ton worth exploring in each level. The game seems to be designed for you to run forever forward, slashing whoever's in your way until you reach the end. 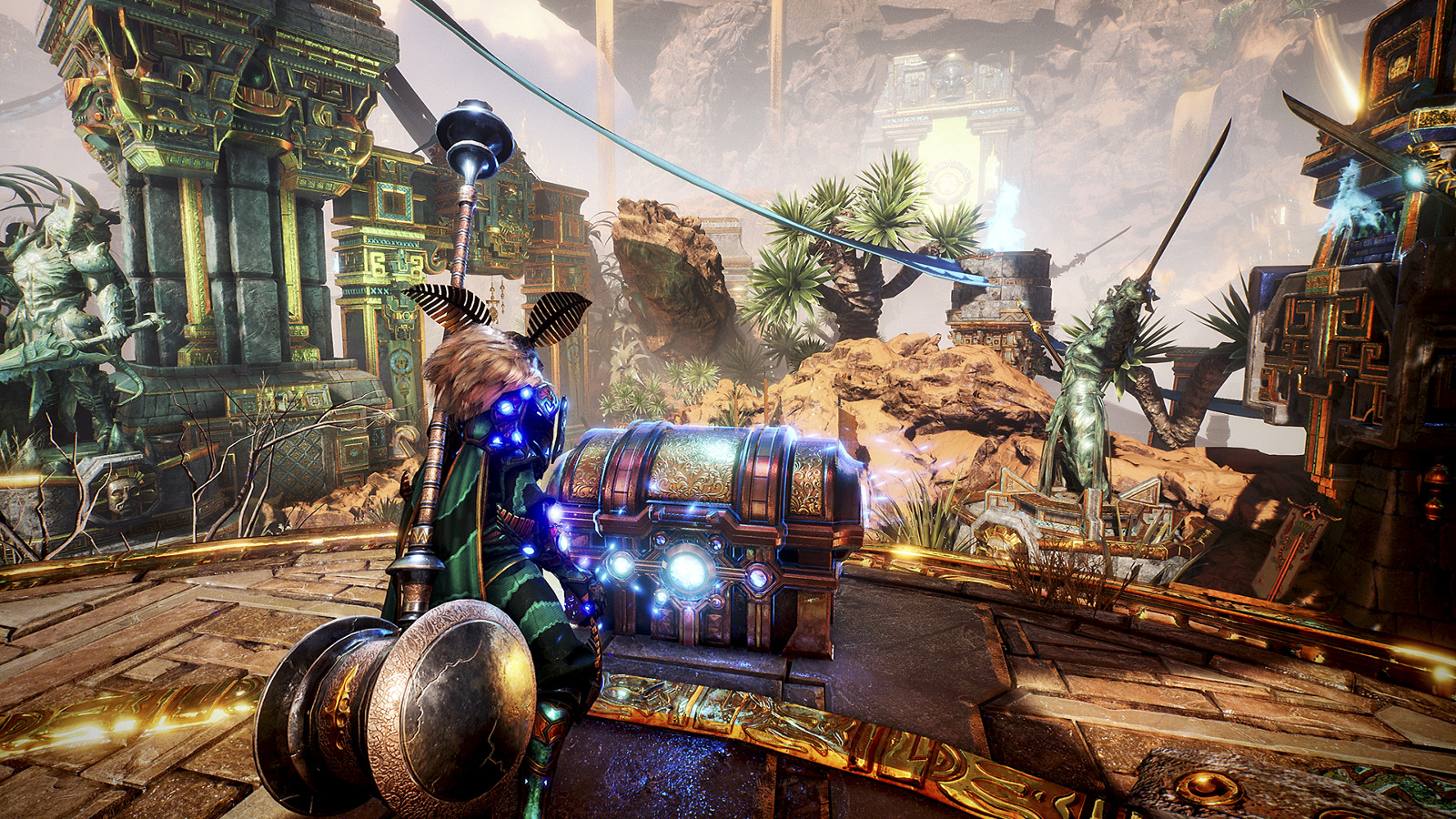 The story is also a little unclear at the beginning and didn't hook me in. You play as a god and your goal is to fight your way through different worlds, starting with Earth, until you face off with your brother, who kicked you out of this kingdom you two had been sharing for a while.

But I don't get the sense that the storyline is supposed to be a huge draw for this game, so don't worry about that.

If you like the idea of playing a ton of melee combat as an all-powerful being in a bunch of very colorful and beautifully shiny levels, then you should definitely buy this game.

Or you can always try getting a review copy. You might get free whisky glasses with it! 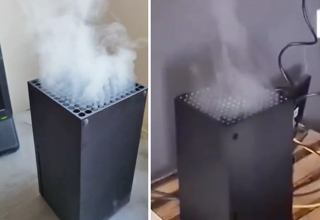 NEXT ARTICLE XBox Series X's Are NOT Smoking, but Some Are Breaking Down