255,120 people are poring over maps of Paris right now, searching for landmarks and squinting at street signs. It is mind-blowing how some geography-minded people can look at a field of corn, a plain path near mountains, or a beach and guess exactly where on the planet it is, down to the street. GeoGuesser gives international players the opportunity to do exactly that by making a game out of Mapillary and Google Street View.

The well-traveled have been going viral on Youtube for guessing vague and remote locations for the past few years. The game was released in 2013 and immediately garnered significant interest, receiving “hundreds of thousands of unique visitors per day within a week of being released”.

The game creator, Anton Wallén, is Swedish. GeoGuessr is available in English, French, Spanish, Italian, German, Portuguese, Russian, Swedish, Turkish, and Dutch. Live streams are also available on the site in those languages. GeoGuessr’s maps are somewhat eurocentric as “the locations are limited to roads and other paths that have been photographed by Google Street View cameras for paying members, which excludes the majority of Asia and Africa, most of the Amazon basin in South America, most of Central, and Outback Australia and most of the far north in Canada and Russia.”

Travel Youtuber GeoWizard is one of the games’ most notable streamers. A year ago, he began filming an intense series, called “Real Life GeoGuessr”, where the player’s wife drops him off in the woods and he has to figure out where he is using context clues like signs and foliage. GeoWizard also started a “Geo Detective” video series, where fans send in photos of a location around them and he has to guess where the photo was taken.

Recently, the game limited content behind a paywall. The Individual Plan Pro membership costs $2.99/month or $23.88/year. GeoGuessr is unusual because Group Plans are also available for purchase. The subscription groups range from 15 to 100 members and the monthly cost runs between $39.99 to $200. Either version of the Pro status includes perks such as the ability to build maps, play Country Streak and Battle Royale, skip ads and the waiting period, creating leagues, playing with friends, and more. It is available on iOS and supported browsers.

Teachers can purchase an Education tool for their geography classes. Up to 250 students are able to play on a map created specifically by the teacher without ads. Battle Royale is a newer multiplayer feature on the site where a player can either set up a game with friends or be matched with random opponents. Players get eliminated by either running out of time during guessing or by losing lives. Country Streak counts how many countries the player can correctly guess in a row.

The Daily Challenge is a competitive five-round mode of the game. The maximum score you can earn in each round is 5,000 points totaling 25,000 points to the players who can guess an accurate location in under three minutes per map. After each round, you are able to rate how much you enjoyed the map with stars. As of now, this content is still free.

Round One: Take a look at these two images and guess which country they are from

For this round, I decided I couldn’t stray away from where I was immediately shown because there were so many context clues I should be using. The first photo might be in South America, because of the tall green mountains and paved roads. When I moved the cursor, however, I saw the name of the gas station was definitely not in Spanish or a language I remotely recognized. In the second image, the blue car looks old and long, so I decided it wasn’t taken in Asia. The truck further back looks especially boxy and short, so I decided it wasn’t taken in North America either. Behind the gas station is a building marked “Hotel”. Since that was an English word, I guessed that it was a country that primarily spoke English which was near a country that didn’t primarily speak English. That idea placed me in Europe. I am simple, I see English and think “England”. I forget about the gas station sign. Obviously wrong -- Albania. 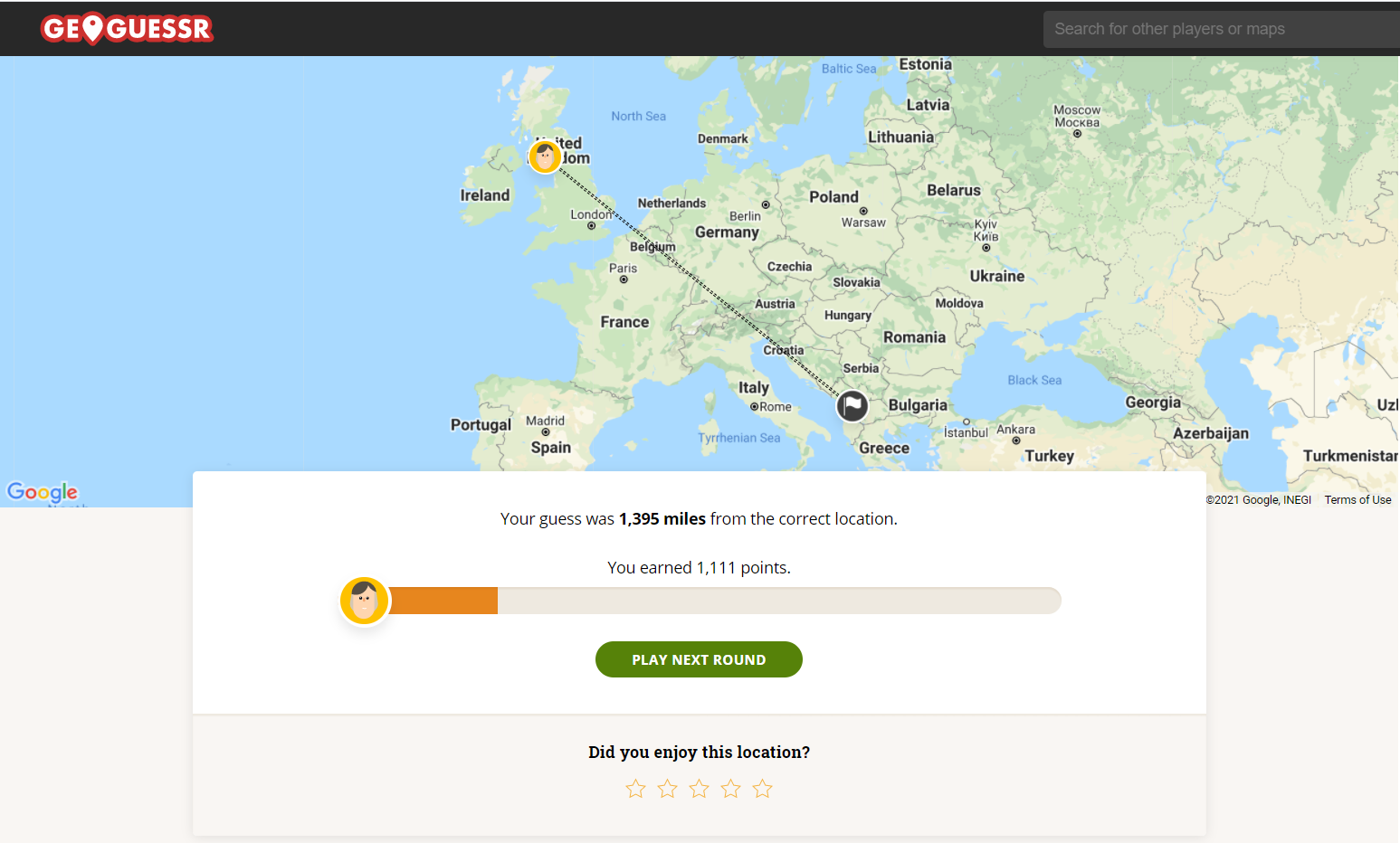 During this round, I almost used up my three minutes because I was plopped in the middle of absolutely nothing. I have never been so annoyed to see a fence as I was during this. Which trees are deciduous and which are coniferous? My first thought was a hiking trail or ranch. After wildly clicking in one direction, searching for a building, I found a single idiot cactus. Once I saw the “STOP” sign, my guess was California, Arizona, or New Mexico. My final selection was Arizona because it was the most warm and “cactus-y” place I could imagine. Again, not even close. Galapagos Islands. 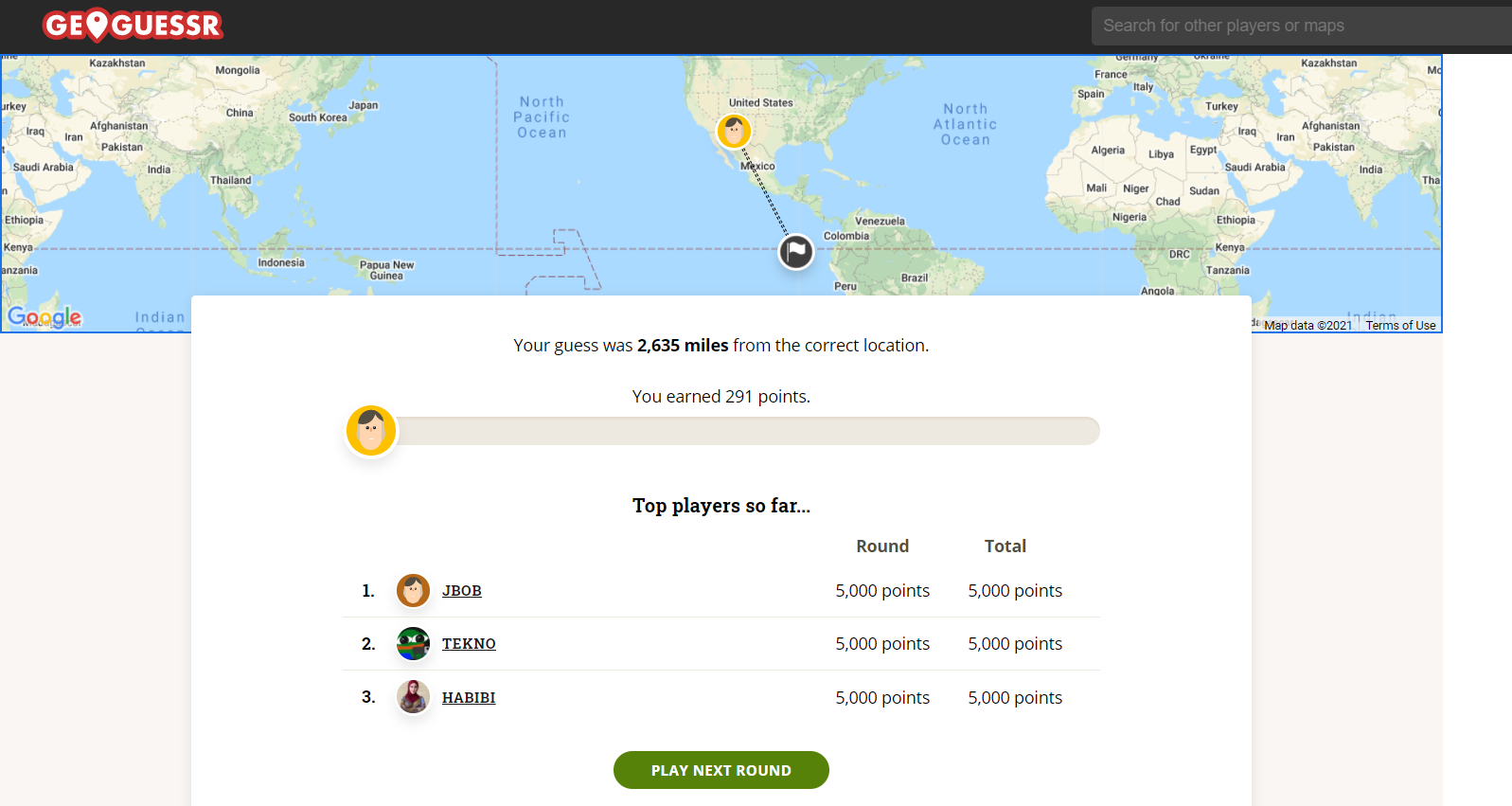 Round 3: If you have ever gotten a perfect score on the Daily Challenge or teach Geography, please slide into my PM’s to teach me some critical thinking skills.

This one probably should have been easier but I was thrown off by the giant penis shadow in the first screenshot. Observing the second photo, my context clues are marshmallows and grass. The third photo should have helped me with the birch trees, but I assumed the car in the driveway was a Honda Accord. The fourth photo made me think of the Robert Frost poem, Stopping by the Woods on a Snowy Evening, and it's first two verses which occasionally get stuck in my head...

“Whose woods these are I think I know.

His house is in the village though;

He will not see me stopping here

To watch his woods fill up with snow.

My little horse must think it queer

To stop without a farmhouse near

Between the woods and frozen lake

The darkest evening of the year.”

If memory serves, this poem was written about Massachusetts, so my final guess is its neighbor, New Hampshire, as I have been to Massachusetts, and it is slightly less rural. I could not have been more wrong -- Kuopio, Finland. 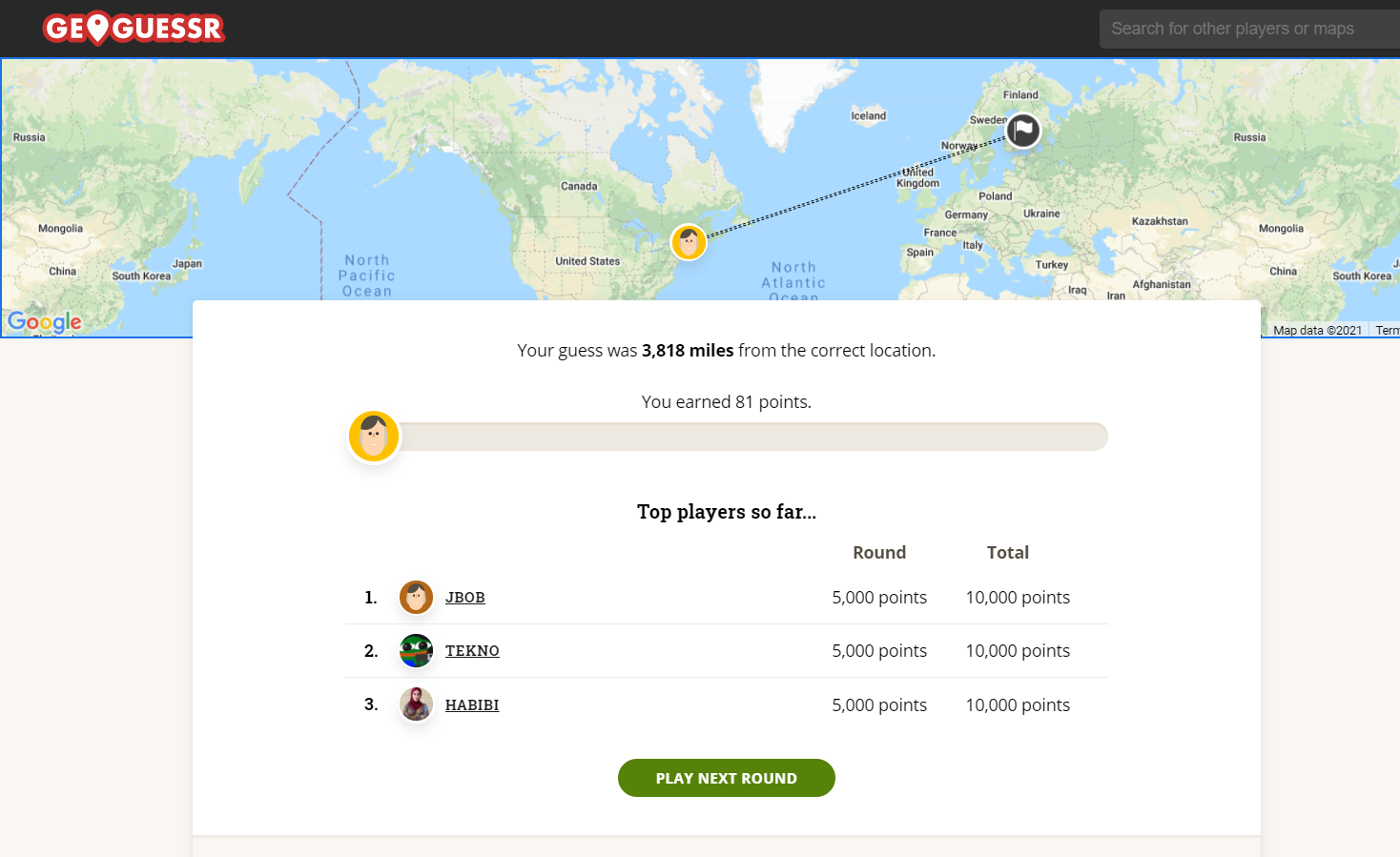