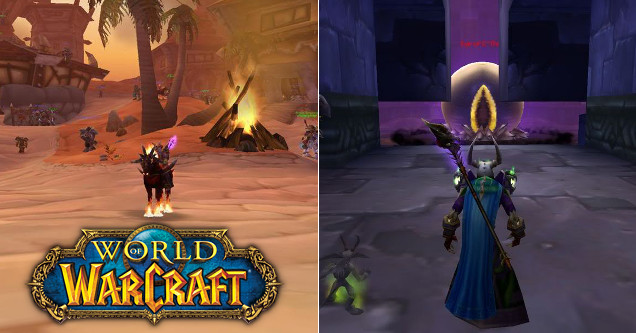 As the resident gaming expert at eBaum's World, it's safe to say I've played my fair share of video games over the years. Even then, nothing comes close to eating away at my lifespan than World of Warcraft, an MMORPG that has a reputation for its addictiveness.

I started playing back in 2005, back when the game was completely changing the gaming industry, and beginning to set records that still haven't been beaten.

At this point I'm missing tens of thousands of hours of my life thanks to this game, and all I have to show for it are screenshots and stories. So, join me in traveling back to 2005 to 2006 as I share with you what it was like to play back then. 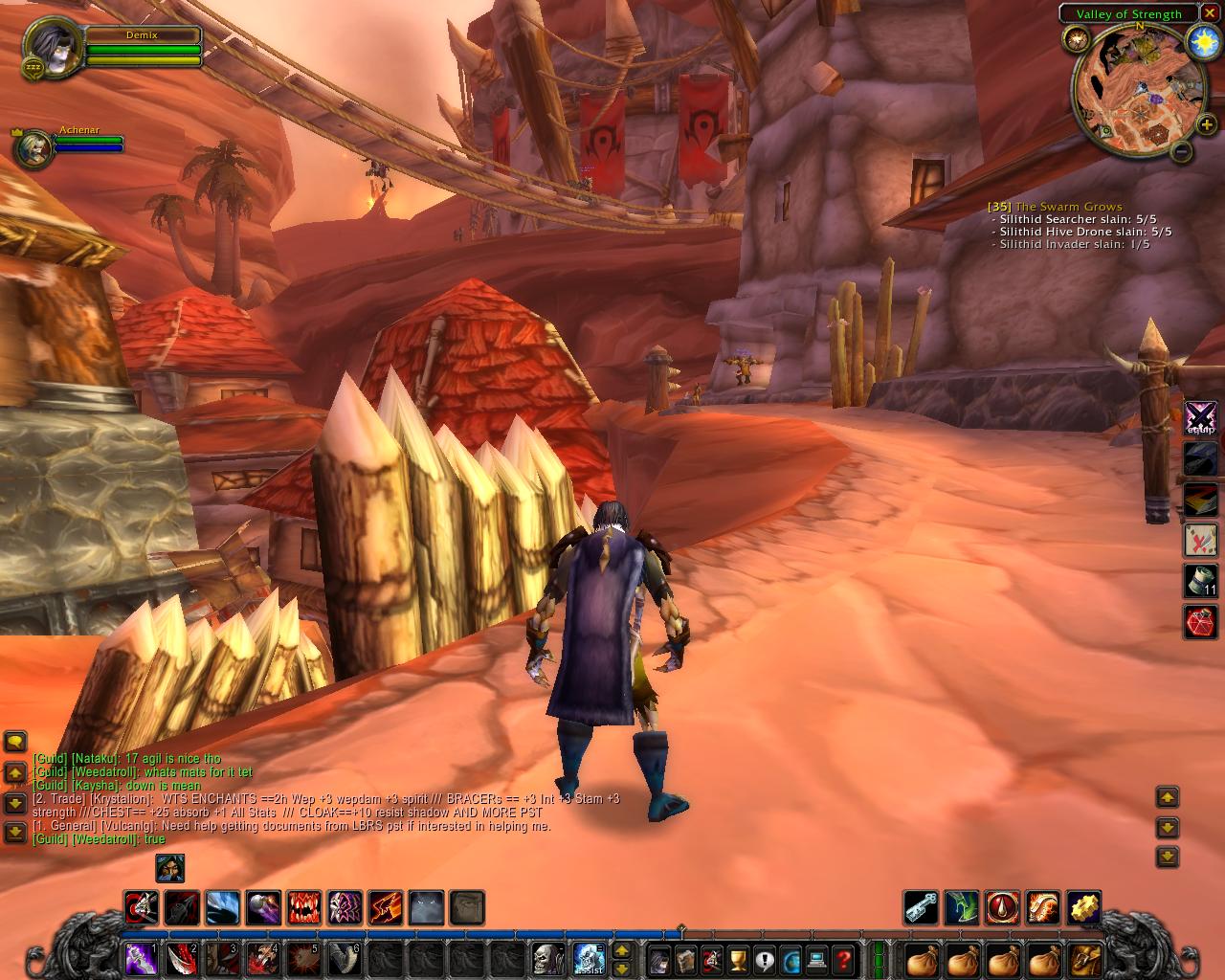 This is the earliest screenshot I have in my World of Warcraft folder. It was taken a couple months after I started, which was after I rerolled from Alliance to Horde on Tichondrius (US). I'm somewhere around level 30 or so, and had no idea what I was doing.

Fun fact: the guy who is in my party in this screenshot, which was taken more than 13 years ago, now works at eBaum's World with me. How crazy is that? 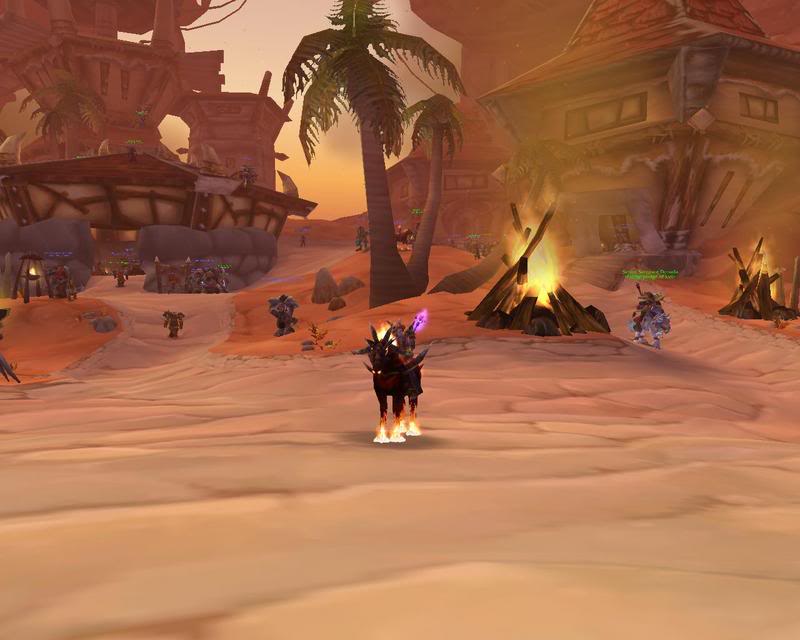 This is what Orgrimmar used to look like. I think it was way better back then, even if it was as if it belonged in the Flintstones. 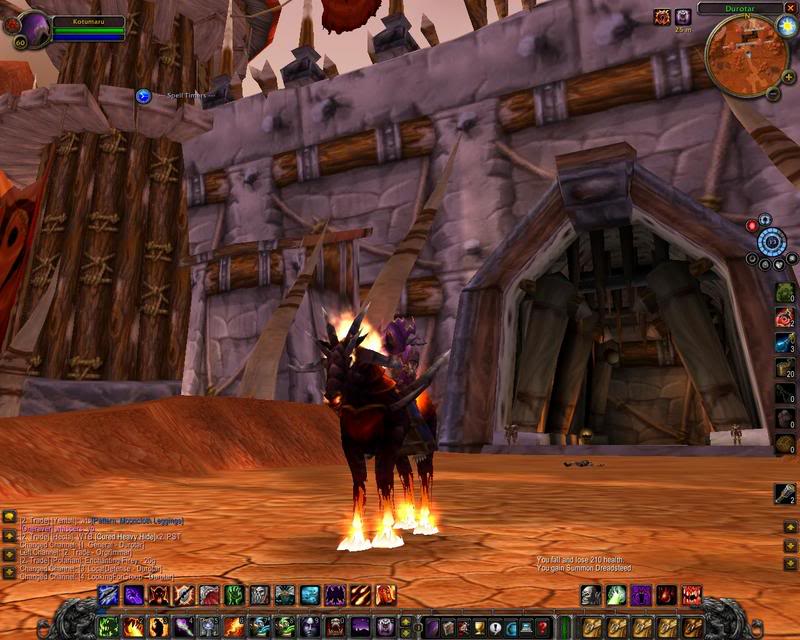 Level 60? Check. Warlock mount quest complete? Check. Back in early 2005 "epic" mounts were incredibly expensive, and not every level 60 had one.

In other words, I got all the Orc ladies. 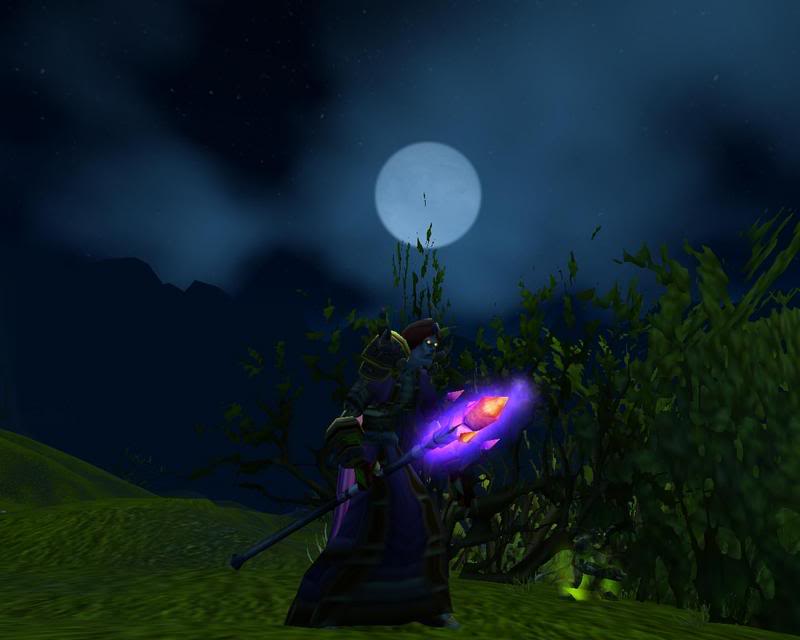 This is one of the earliest screenshots I have. It's a photo of me in Arathi Basin with a couple of Molten Core epics equipped. This is just a day or two after the Molten Core epics were updated with unique models (they were generic before that).

What this screenshot doesn't show are the dozens of people brutally killing one another just a few feet away. Yay for perspective.

For reference sake, these are the visible items that I have equipped:

Head: Nemesis Skullcap (yup, it was originally a turban)

5. Fishing With the Enemy 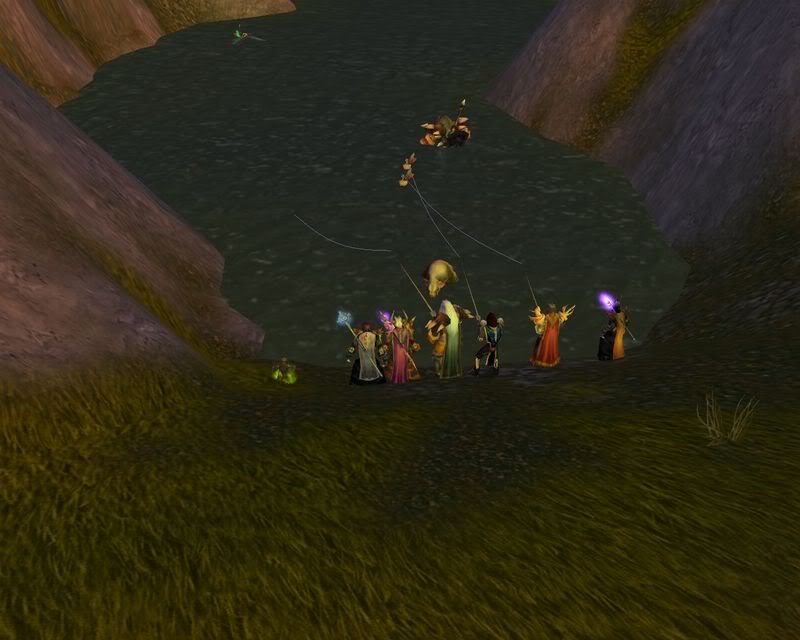 I was a member of what was known as "Cheesecake's Group", a PvP team that would push three players to High Warlord. Back then there was no cross-realm PvP, so teams like ours would dominate battlegrounds.

There was one Alliance group that did give us a run for our money, though. Their team was called "Platetrain's Group", led by a well-geared Night Elf Warrior named Platetrain. We would beat them most of the time, and in this case Platetrain and his friends decided to fish instead of battling us. It was a nice change of pace similar to the Indians and Pilgrims gathering for Thanksgiving.

Also See: Amazing Screenshots Of What World Of Warcraft Looked Like Before Release

By the way, that big fat Tauren in the water would become a High Warlord just a few weeks after. I would make it to Warlord, but didn't quite have it in me to go all the way. 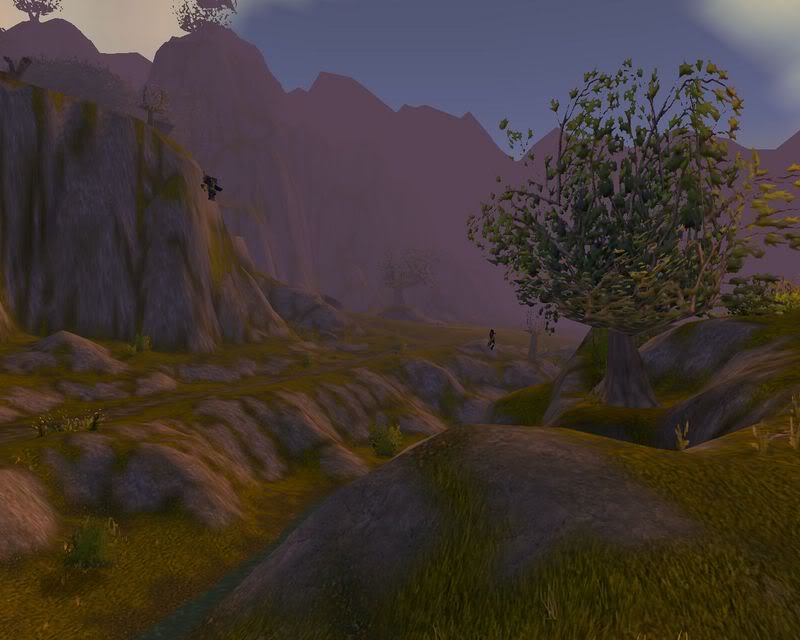 If you look closely you'll see two players slowfalling from Lumber Mill down to Blacksmith to save it from being capped. I snapped this on my way to the location and it's easily one of my best works (lol). To be honest, I don't think the Tauren made it all the way given his mass.

P.S. The guy in front is the one who led all of the exploration expeditions you'll see in this gallery. He's the World of Warcraft version of Leonardo da Vinci. 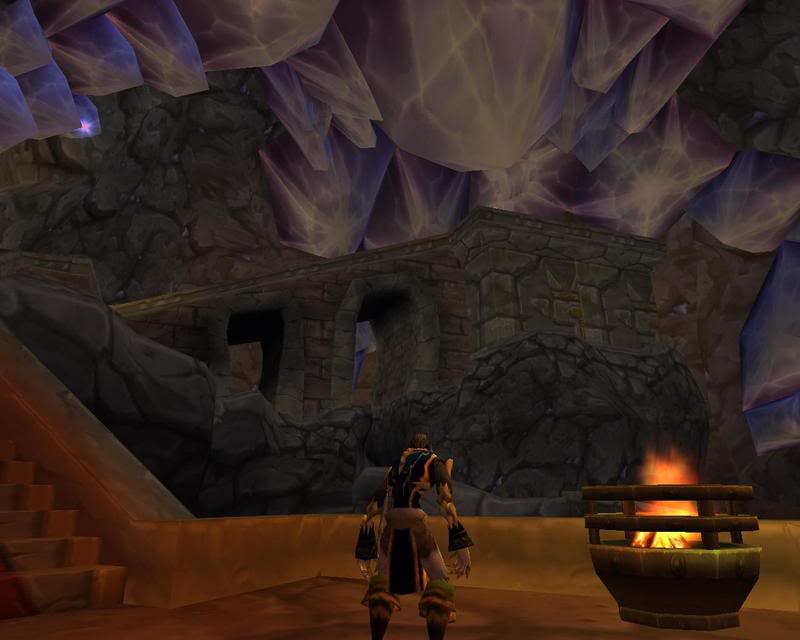 Ever wonder what the bottom of Ironforge looks like? Bam, there it is.

Thousands of Alliance were only meters above me. I suppose it was a little scary. 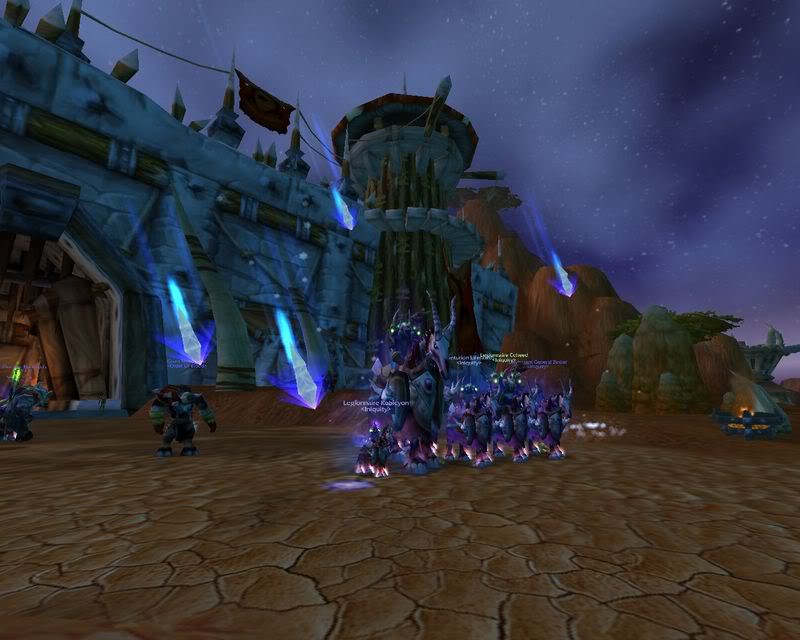 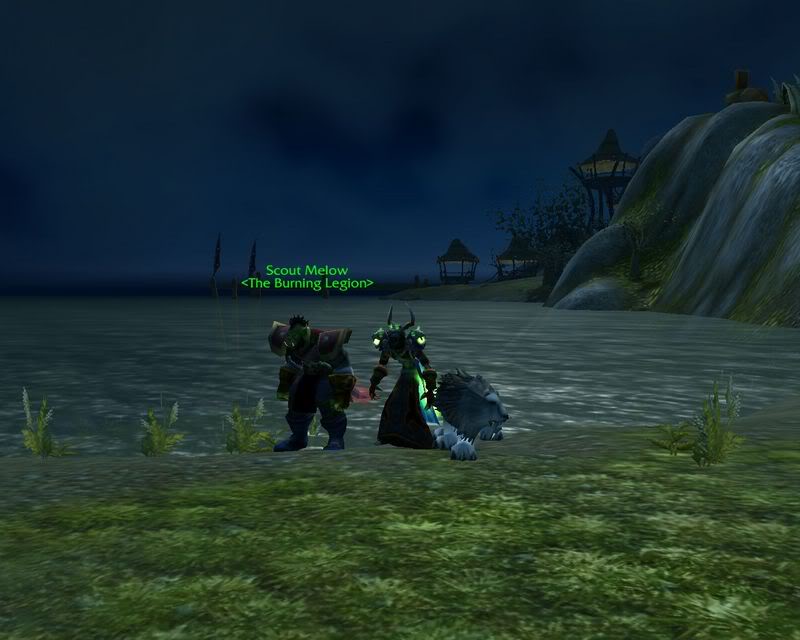 I managed to get a real-life friend into the game during Vanilla, my first time accomplishing such a feat in an MMO. This is him around level 40 while leveling in Desolace. I took out a few scumbags who tried to gank him, which was awesome.

I felt kind of guilty once I saw how addicted he got to the game. 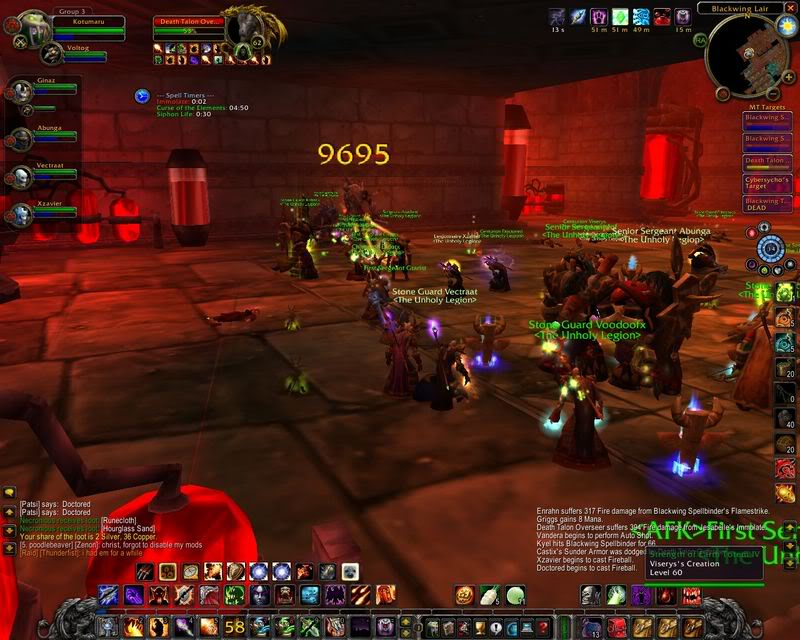 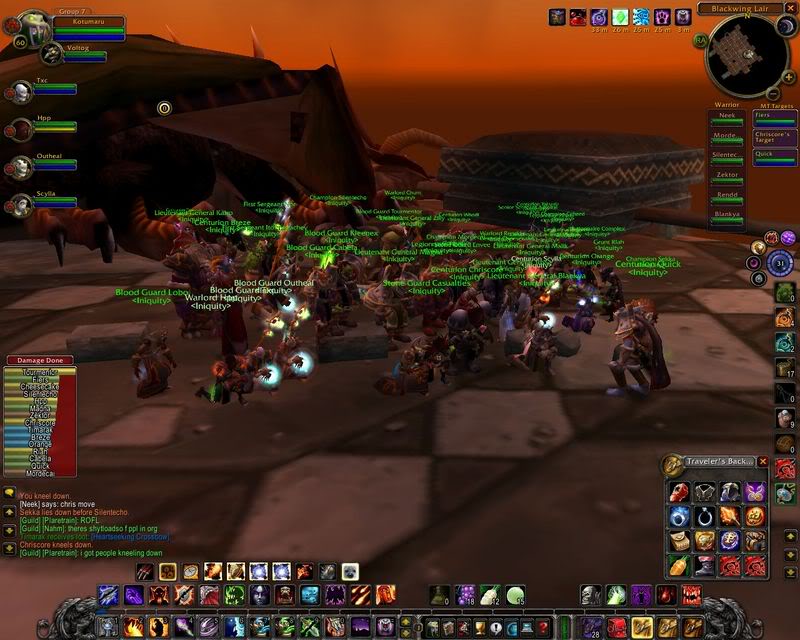 After weeks of hard work we finally did it. This was my first time experiencing a significant progression kill, and just about the only time our guild could properly gather for a screenshot; I think half the people in this screenshot have ADHD.

12. Celebration Is In Order 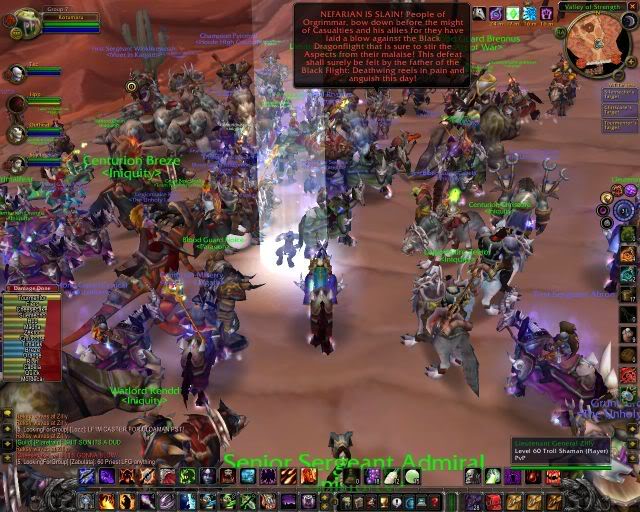 All the Horde on our server gathered for festivities and dancing after we brought the head of Nefarian back to Orgrimmar. 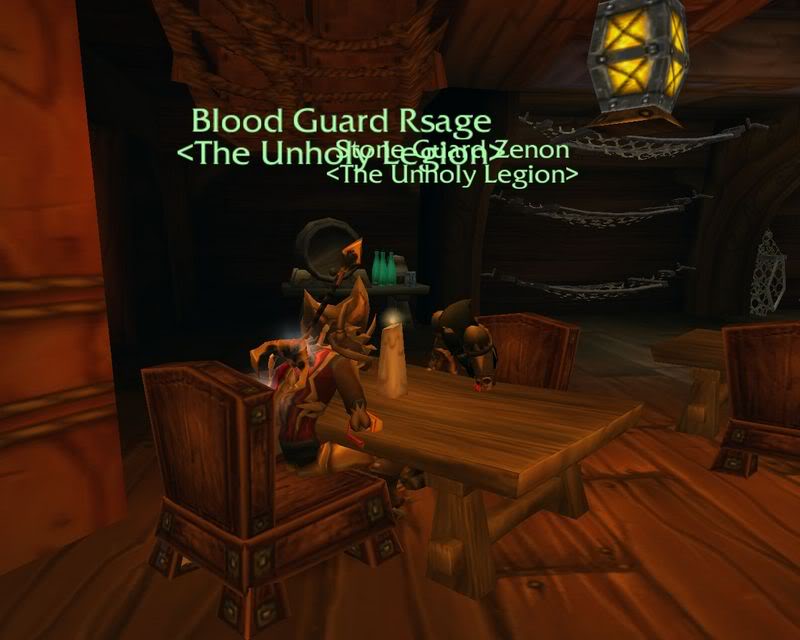 Here's myself with two of my World of Warcraft friends hanging out on a boat after killing tons of lowbies in Wetlands. They still say this was one of the most enjoyable days in their World of Warcraft history. I agree.

I still keep in touch with these two players. Maybe one day we'll meet in real life. Probably not. 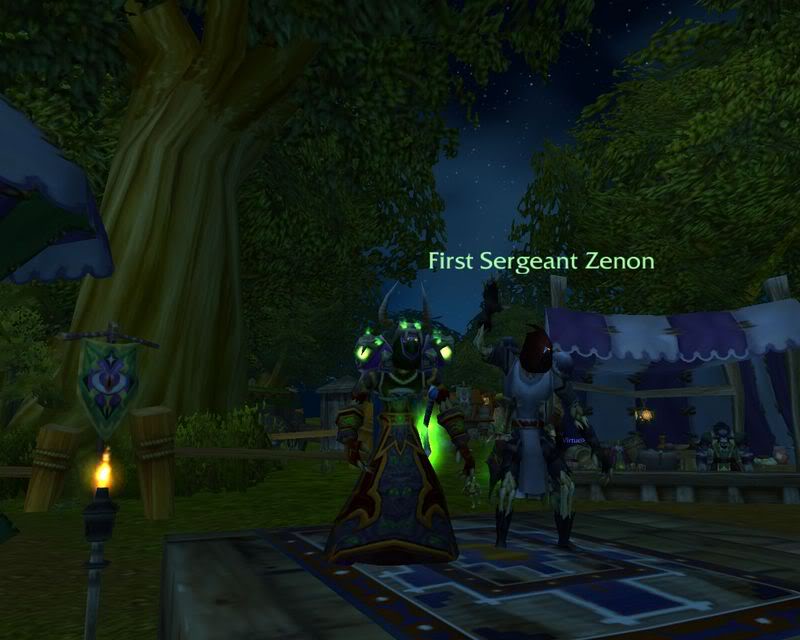 This was the day Darkmoon Faire opened for its first time. Playing mini-games with my Aussie friend was a real joy. 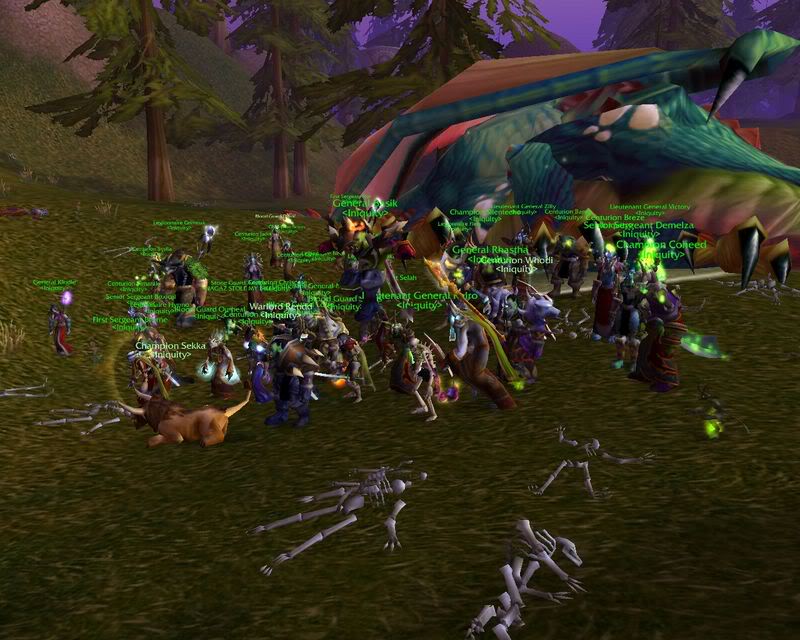 This was our guild's first outdoor raid boss kill. On our server the Alliance usually dominated these kills. As you can see by the skeletons in the screenshot, we managed to murder them to claim the fight. 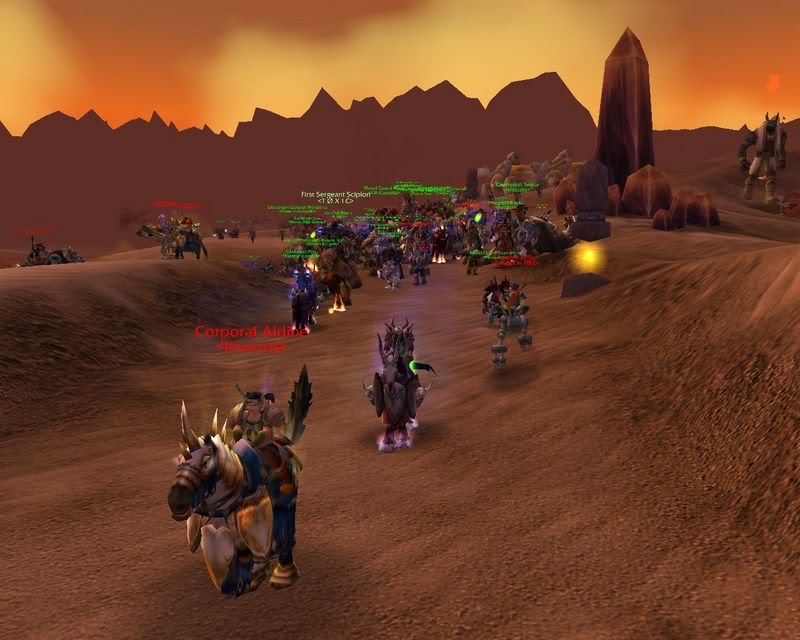 The Ahn'Qiraj Gate Opening was a huge lesson learned by Blizzard. Even on my small server, the network simply couldn't handle having so many people in one place. It was ambitious, but an absolute wash due to lag and crashes. I did manage to take this cool screenshot of everyone racing to the gate, though. 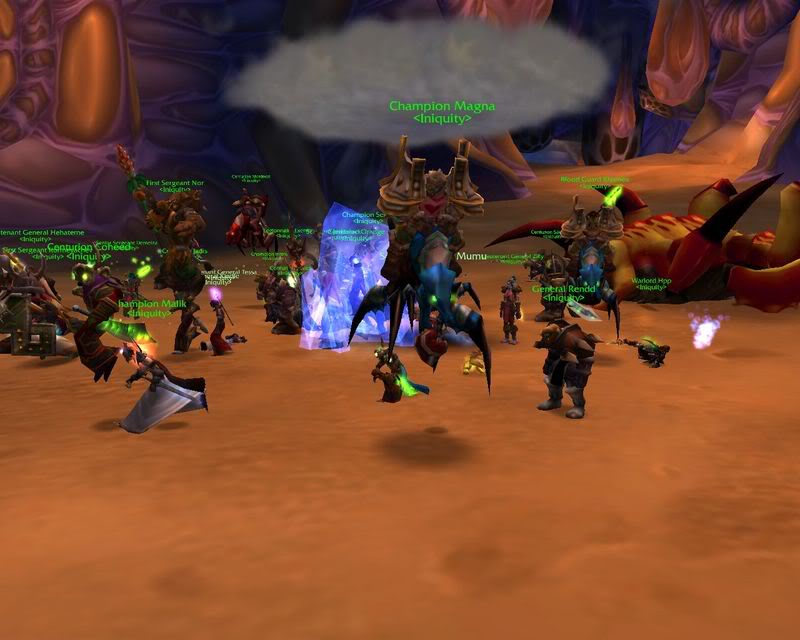 Fankriss was a rather easy boss, but I like this screenshot because it shows how bad my guild was at gathering for post-kill screenshots. 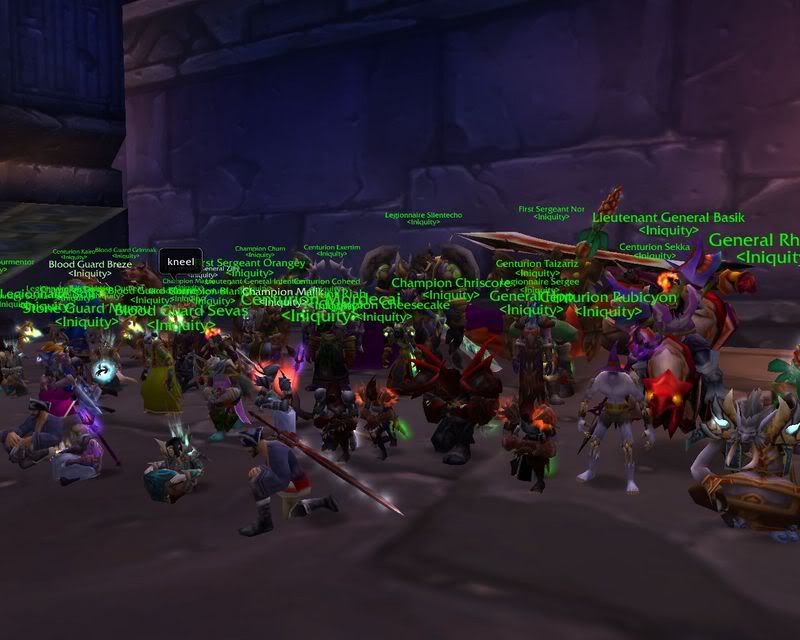 We spent over 40 hours learning how to kill the Twin Emperors. There were so many nuances involved with threat swapping when the bosses teleport. I can still remember the entire battle from beginning to end... 12 years later. You could say it scarred me.

Notice the guy saying "kneel" on the left. That guy was a real dingus. 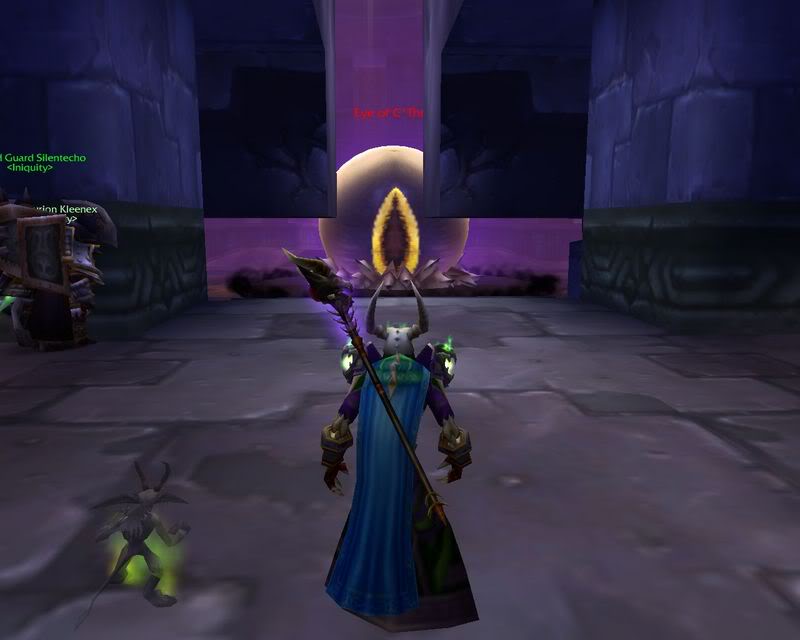 This eyeball, a.k.a. C'thun, really doesn't like people stabbing it, as we would learn in the coming month through hundreds of wipes. 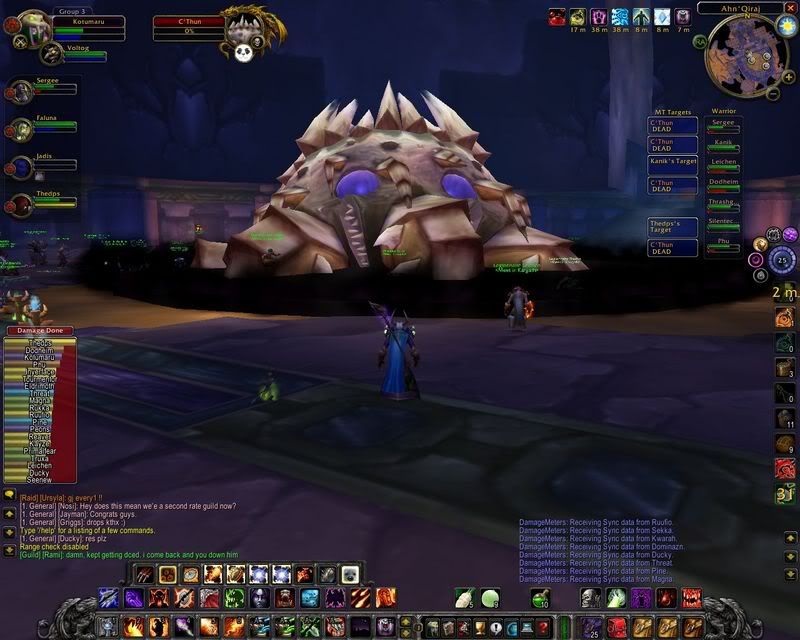 I can't quite explain just how difficult C'Thun was at the time he was released on the official servers. Let's put it this way: I was in the top guild of my server (Iniquity of Kalecgos) and this single fight actually killed the guild. We would split after four weeks of strenuous attempts. Following collapse, myself and a few members of the guild would find their way into another Horde guild called Meet in Kargath. About two weeks later we would down C'Thun. The rush of excitement as he fell with only a few of us still alive has remained unmatched to this day. Looting the corpse to find several god-tier items was extraordinary.

I farmed so many tubers so that I could heal myself throughout the fight (they were health potions with separate cooldown timers from regular potions). This, coupled with a high level of investment to understand all the intricacies of the fight made it the costliest battle I've ever waged. Despite being a Destruction Warlock, which was a no-no at the time since Afflication had better throughput, I managed to get third in terms of overall damage by being extremely aware during the remainder of the 15 minute fight. I felt like I was on-point, and it paid off. 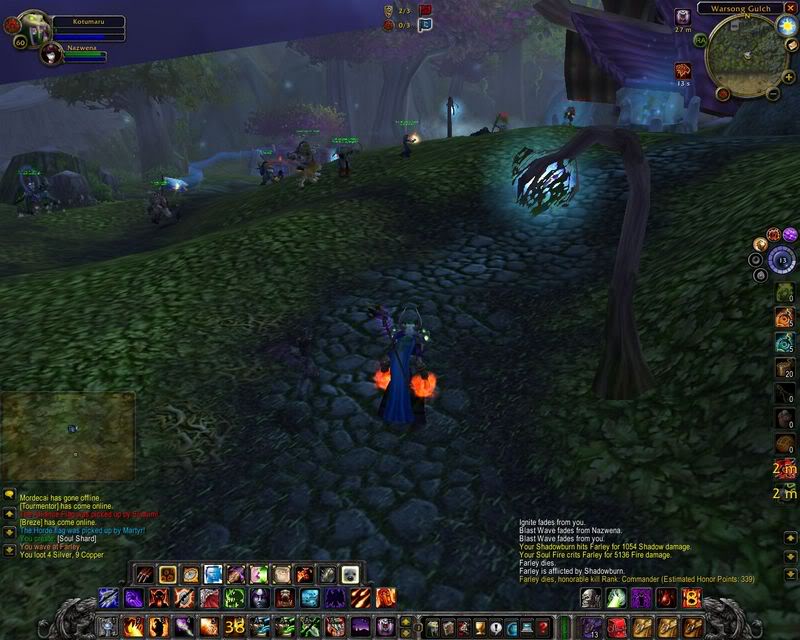 I will never forget this moment. At the time I was well geared with nearly full Tier 2 and Staff of the Shadow Flame from Nefarian. I picked up the Berserking Buff in Warsong Gulch, seduced one of the best Mages on the server with my Succubus, and one shotted him with Soul Fire. I'm pretty sure that even he remembers this.

Look on the bottom right for the combat log. Oh, and look at my health, too. 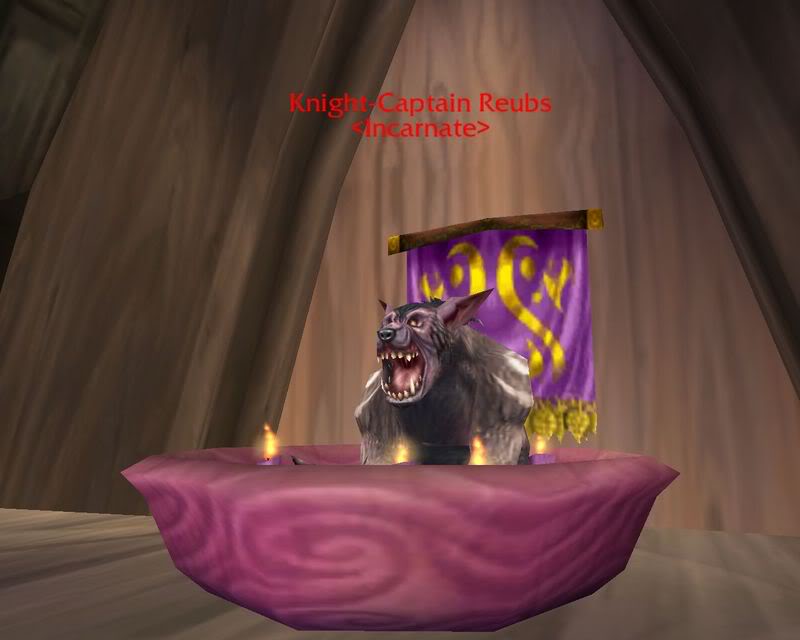 Just a random screenshot I took of an Alliance friend. I hated Night Elves, but he was cool.

23. The Story of Broken Tooth 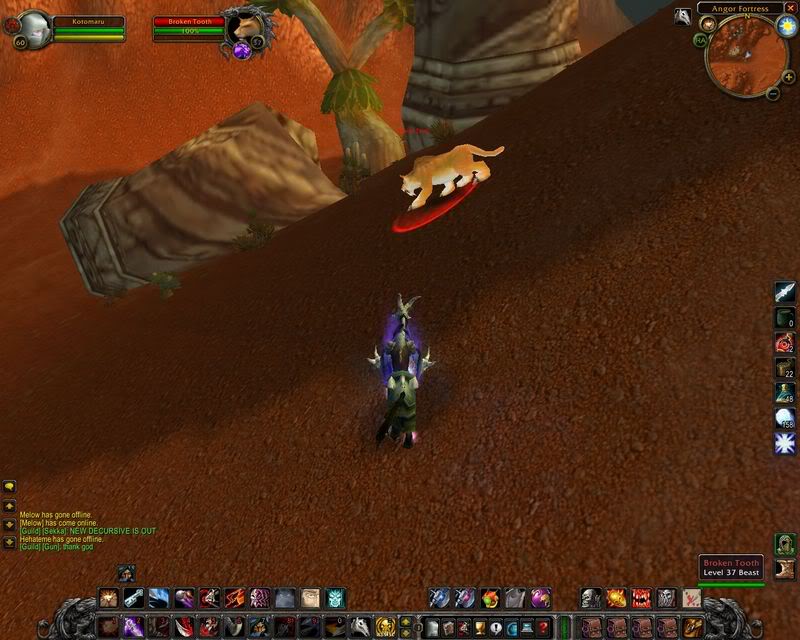 So, a friend of mine got the game and began started as a Hunter. At the time, I believe Broken Tooth was the most sought after pet in the entire game. Unfortunately, he was a rare spawn.

Well, we spent about 14 hours (I wish I was kidding) camping him. Coming from hunting Notorious Monsters in Final Fantasy XI, it was just another day for me. After giving up following a full day of sitting in place getting nothing accomplished, I left my Rogue to log out in the vicinity. On the next day I began checking for Broken Tooth's spawn every hour. I eventually found him, and since I had my friend's login information I would hop over and tame the beast so that when he logged in he would see Broken Tooth by his side. He was very happy, to say the least.

He tells me he still has Broken Tooth in his stable a full nine years later. Remarkable. 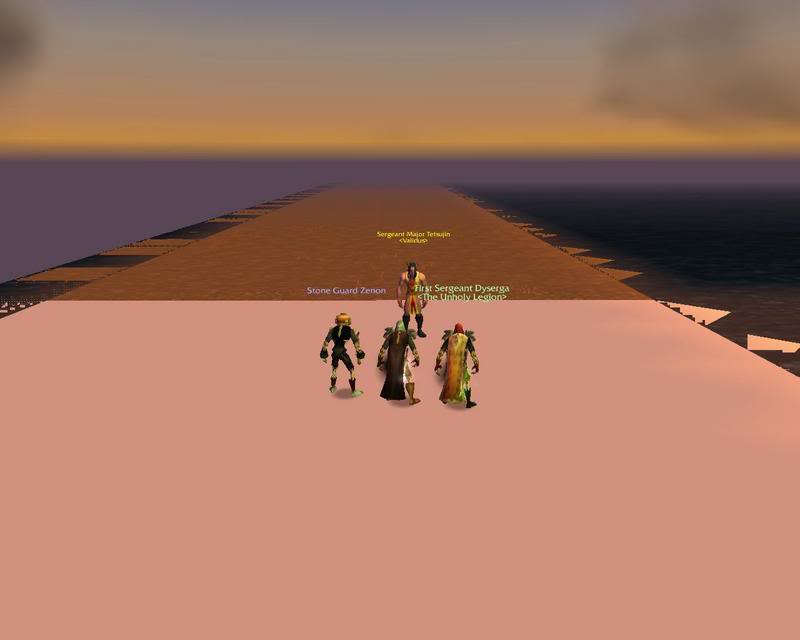 Myself and several good friends absolutely loved exploring during Vanilla, led by Zenon, the guy with the underwater helmet on the left. He was great at finding ways of going to places players weren't supposed to in the game world, and we would join him on these trips.

In this case, we used Water Walking and three forms of Sprint in order to get to the edge of the world near Sen'jin Village. This was our best exploration trip ever, because I don't personally know anyone else who ever made it here. 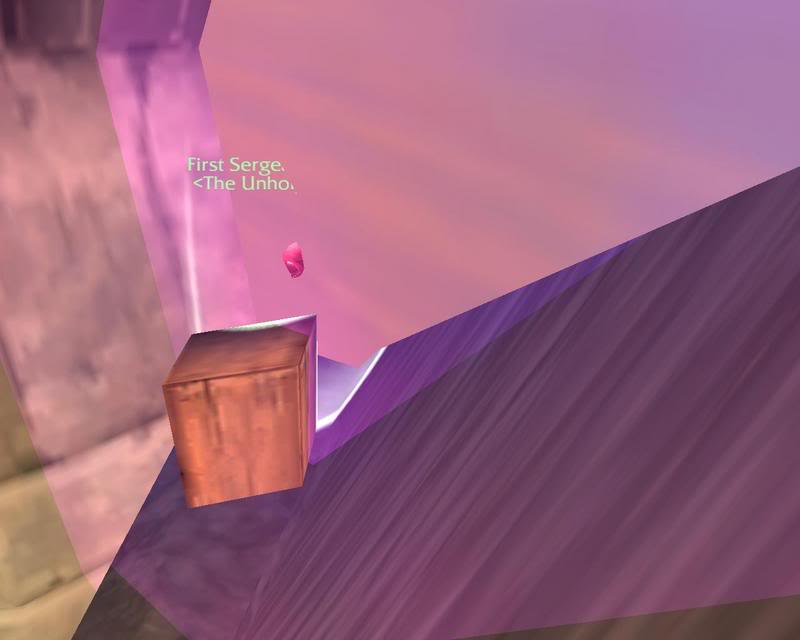 Here's my friend after finding his way into Dalaran. He had to Hearthstone to get out. What a weirdo. 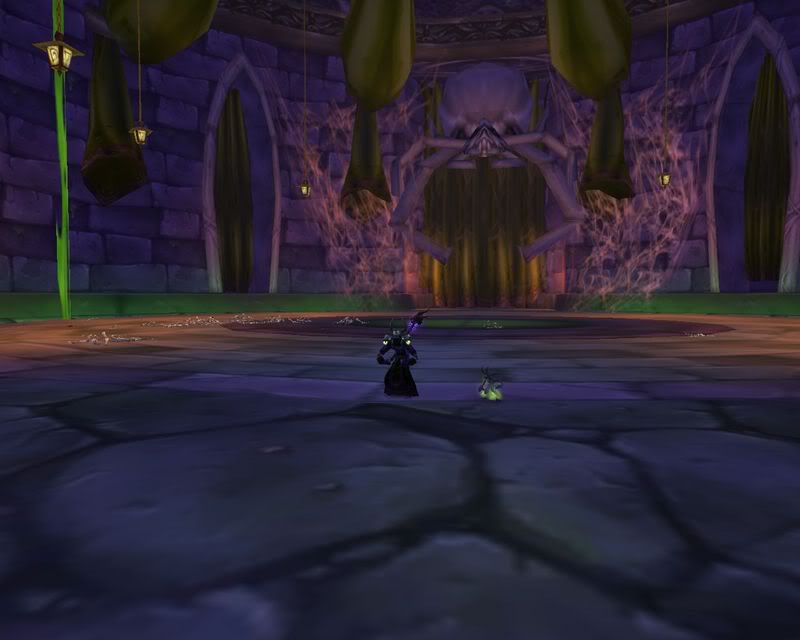 During my final weeks my guild killed the first boss in Naxxramas, and I used my DKP to get the bracers that dropped. Although it was an exciting time, I was beginning to become worn out. This would be the last boss I would kill during Vanilla. 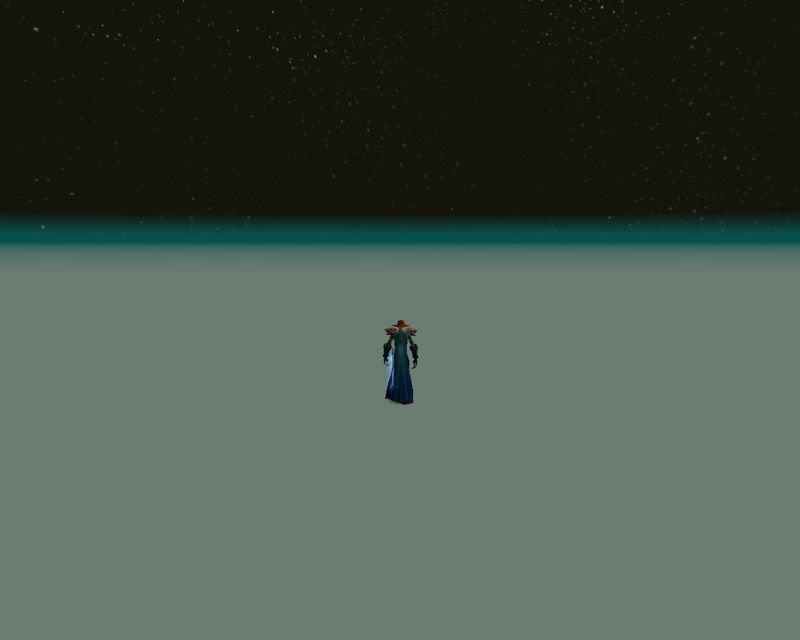 This is me using my sister's character to get to a place I wasn't supposed to. It's a place hidden in Dead Mines that I don't think you can get to anymore. 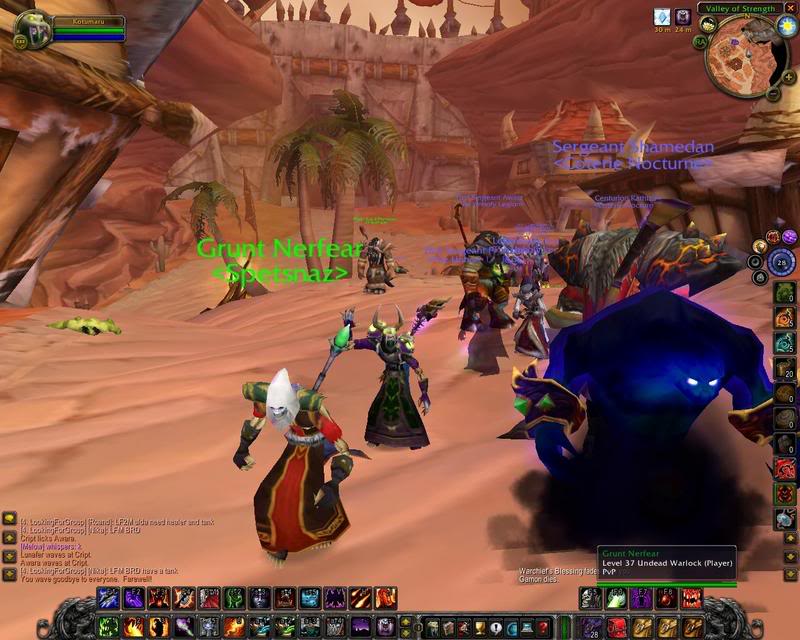 By early 2006, shortly after the arrival of Naxxramas, World of Warcraft had taken over my life, and I eventually realized it. I decided to quit cold turkey, losing my account in the process. Although my Warlock and Rogue are somewhere out there, I have no idea where.

I miss Vanilla World of Warcraft... a lot, to a point where I haven't even come close to being immersed in another MMO since then. You can bet I'll be playing World of Warcraft Classic once that releases. Until then... FOR THE HORDE. 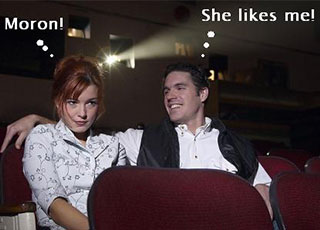