The standards for what makes a good game have evolved past having great soundtracks, unique art styles, and dare we say, gameplay. Gone are the days of the skippable cut-scene. Cinematic moments are now a standard in the industry, while we in the past might have thumbed our noses at such an intrusion, we must admit, not all cinematic moments in video are skip-worthy. So here are some moments when video game cinematics were worth the watch.

The Nuke in Call of Duty MW will forever be one of the first mind-exploding action sequences ever. It’s a thrilling cinematic that totally delivers the up-close personal nuke and the after-effects. The best part, all of that is in-game and real-time, where players are allowed to explore the nuked city immediately.

Who would’ve thought a simple walking scene would be one of the most memorable moments of this PlayStation 3 masterpiece. Near the end of MGS IV, players are meant to walk through the microwave hall, burning the already deteriorating skin of Solid Snake. With the soundtrack in the background and the real-time split-screen action on top, it really is one of a kind sequence and an example of visual storytelling done right.

The Portal 2 intro is built to shock players to the core. Contrasting a nice vacation hotel vibe with the speculative fictitious world of the game. New players will have no idea that their world is about to change in a matter of a few minutes as Wheatley helps Chell out of her room.

Rockstar Games drove far away from the dry humor and exaggerated stereotypes of Bully and GTA games when they made the absolute best wild west video game ever. Red Dead Redemption is an incredibly ambient title, and it only gets better when players are tasked to travel to New Mexico on their horse slowly and the song “Far Away” kicks in the background.

2007 was the year of some amazing games, almost none of them came close to Bioshock in terms of concept. This was refreshing when the players are allowed to breathe because they enter a dark underwater city through a lighthouse visually.

Kojima is known for his lengthy cutscenes and creative boss battles. This is why it’s kind of a given that MGS3 ends with one of the most cinematically intensive conclusions ever. It’s painful, beautiful, and simply the perfect end to one of the best MGS games ever.

The Last Of Us (Prologue)

Here’s a great opening to a very good game. But what sets this one apart is the top-notch acting, pacing, and gut-wrenching twist that hits you right in the heart when you complete the prologue. The way The Last of Us starts is almost like a movie.

Columbia, the city in the sky, isn’t an easily explainable concept since it is a brand new universe. Moreover, there’s a concurrent story that needs to be explained to the players as well. So how do you do it? The answer to that is the introduction segment of Bioshock Infinite.

Gamers often overlook Quantum Break wasn’t wildly popular back then. But truth be told, this one is a must-play for the fans of storytelling in games. The fact that Remedy was able to squeeze those effects on the Xbox One hardware was incredible. Moreover, they were also able to execute a pitch-perfect timelapse in real-time.

Easily one of the best visually striking scenery changes Uncharted series. The players go from the airport to the plane to the landing ring in the middle of The Rub' al Khali desert. And it all happens in a matter of minutes with a deep focus on cinematic camera work and gameplay.

The absolute best Spider-Man game in forever is popular for a good reason. It has many Spider-Man’s arch enemies, and the encounter where Peter has to fight them all is probably one of the greatest moments in the game.

Devil May Cry 5 (The Dance)

It would be blasphemy if we didn’t talk about Dante’s dance in Devil May Cry V. The way this thing is shot is so over the top, and for once, it’s not just sword-swinging action.

Between so many visually stunning boss fights in the series, including the new God Of War. There’s just something so perfect about the Cronos boss battle in God of War 3. It’s a David vs. Goliath kind of a fight, except Kratos is human-sized while Cronos is a god, damn titan.

A Way Out (Final Confrontation)

A Way Out is built in a way that many sequences almost feel like a movie. From the prison escape to the part at the farmhouse. But it’s the final confrontation that pitches both the players against each other and takes the cake. It’s a cinematic end to a visually compelling movie-like action game, and it is as good as it gets.

This is going from the dark vibe the first two games. Max Payne 3 became more or less like an 80s action movie. This is why the entire Airport Showdown is a mish-mash of shooting and explosive scenes that feel almost realistic. 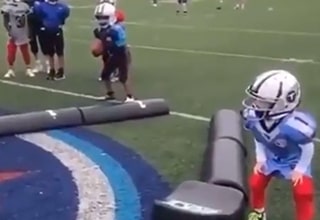