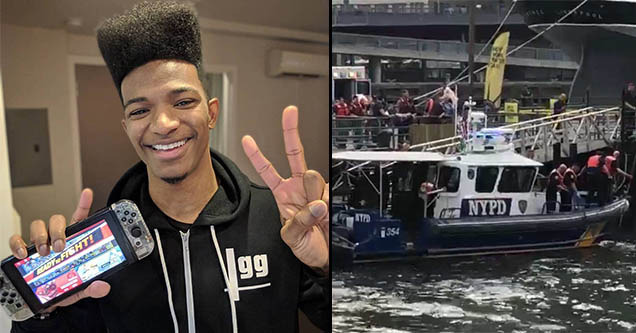 The NYPD has confirmed Desmond Amofah, aka Etika, has been found dead from an apparent suicide. Etika was a popular YouTube streamer, focusing mainly on Nintendo games and products.

We regret to inform that Desmond Amofah aka Etika has been found deceased. https://t.co/sedwZZxglw

According to Know Your Meme, Etika has a past of posting threats of suicide. The first one dates back to October 25th, 2018, where he posted this to his subreddit,

"And now, it's my turn to die. I love you all. Keep fighting for me, ok? I'll miss yall :* make the world better for your own kids, and REMEMBER TO STARGAZE. These last 6 years have been an HONOR."

A second scare occurred on April 16th, 2019, when he posted multiple threats of suicide to his Twitter once again.

Savonarola!  I'm going to kill myself!  You lot certainly have already.  Shame on you all, silly humans.

11 days late he came back on Twitter and apologized.

Being born and raised on the dark side of the internet, I sometimes go too far in my attempts at edgy shock humor.

I've apologized on similar instances in the past I know, so just trust when I say I learned my lesson.

However, just a few days later he started tweeting worrisome things at an extremely rapid-fire pace. Here are some examples:

I am the Antichrist!

You all killed me before, but I'm back humans!

There are no coincidences.  My time is now.  You won't be able to kill me this time.

Humanity, I gave you YEARS to learn.  This time, I will show you by force.

Spread the word.  The world will hear my name soon enough, mortals.

After hundreds of Tweets, somebody got worried and called the NYPD on him. Etika tweeted out this video of the police standing outside of his house.

He even live-streamed himself getting arrested on his Instagram. Here is a video of it, captured by Rod Breslau on Twitter.

Etika just got arrested live on instagram by nypd pic.twitter.com/ilGdf1xBYb

On June 19, Etika uploaded a video to Youtube, saying that he was sorry to his fans for betraying their trust. He also stated that he was not suicidal during his previous incidents, saying, "in an attempt to be edgy, I fucked up my entire life."  However, at one point in the video, he started talking about games, movies, and technology that he will never be able to see, and that "the world will be better off without me," The video has since been taken down and his YouTube channel no longer exists. Here is a mirror of the video posted by EtikaMinecraftNetwork.

Just one day later Etika was reported missing, and on June 22, his personal belongings were found on the Manhattan Bridge in New York City, suggesting he may have jumped off the bridge. 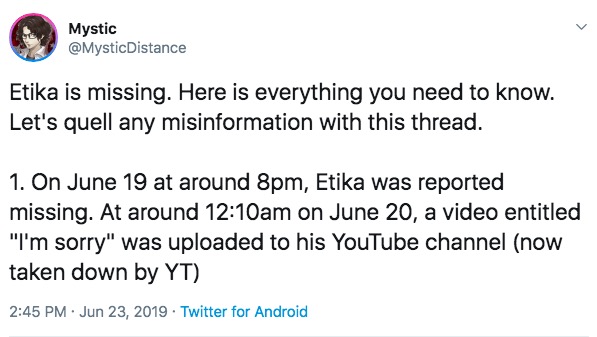 On June 24, the NYPD found a body floating in New York City's East River, just a half-mile from where his belongings were left. The body was identified as Etika just one day later.

Responses and Memes to his death:

I talked to Etika’s mother. This is her & the family’s wishes. So for Friday Fortnite we will being doing this. pic.twitter.com/T51jtvuwVi

Hard to grasp that he's actually gone, left us way too soon.
You will continue to live on in our hearts.
Rest in peace @Etika

We mourn the loss of Etika, a beloved member of our gaming creator community. All of us at YouTube are sending condolences to his loved ones and fans.

If you are looking to help people like #etika and others who are suffering from mental illness, depression, anxiety, and suicidal thoughts please help match my donation to To Write Love On Her Arms.

Hope in some small way it help make things a bit better. pic.twitter.com/tXucfC2ALp

Mental health is something to be taken seriously, if you or anyone you knows this struggle please seek the help and care that you need, asking for help is not a weakness, Rest in peace Etika

rest in peace, Etika. thank you for all the laughs and memes you brought over the years.

Remember what he wanted pic.twitter.com/i1K6tWJtCS

Was dreading this would happen...
Fuck, this makes the events surrounding him for the past few months even more terrifying. Hopefully this is a wakeup call to some people that mental health needs to be taken seriously.
I'll miss your charisma and enthusiasm, Etika. Rest in piece.

This is my all time favorite Etika clip. Made me laugh so hard the first time I watched it. It was so unexpected. pic.twitter.com/WQmRZ20lxP 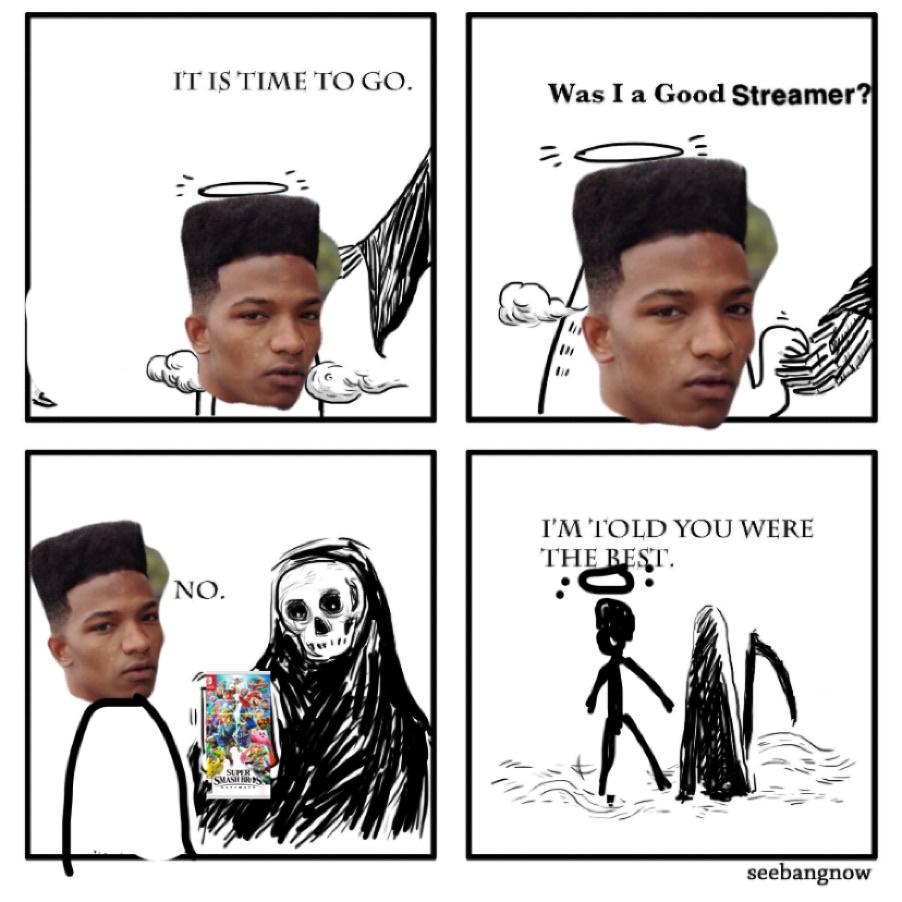 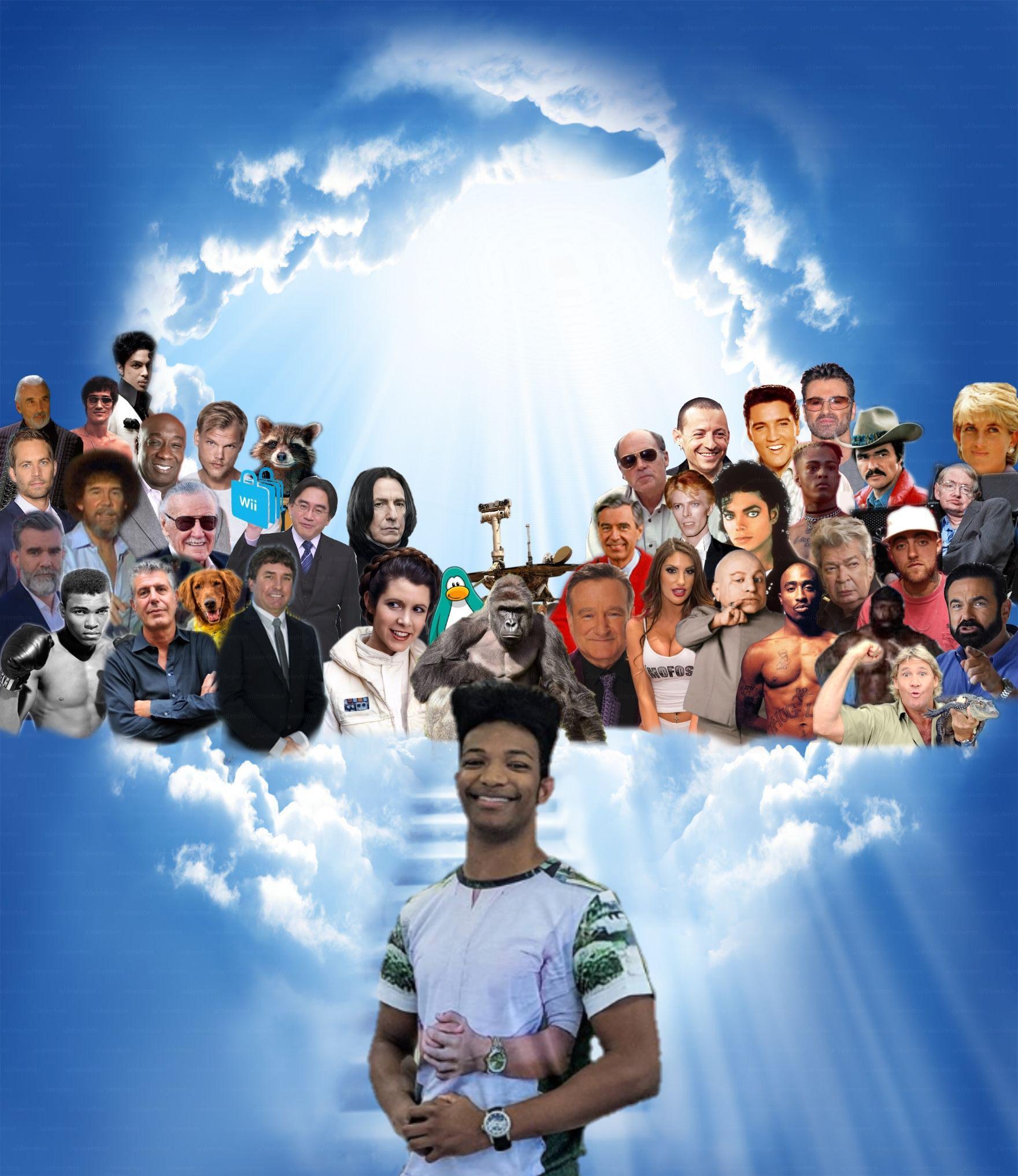 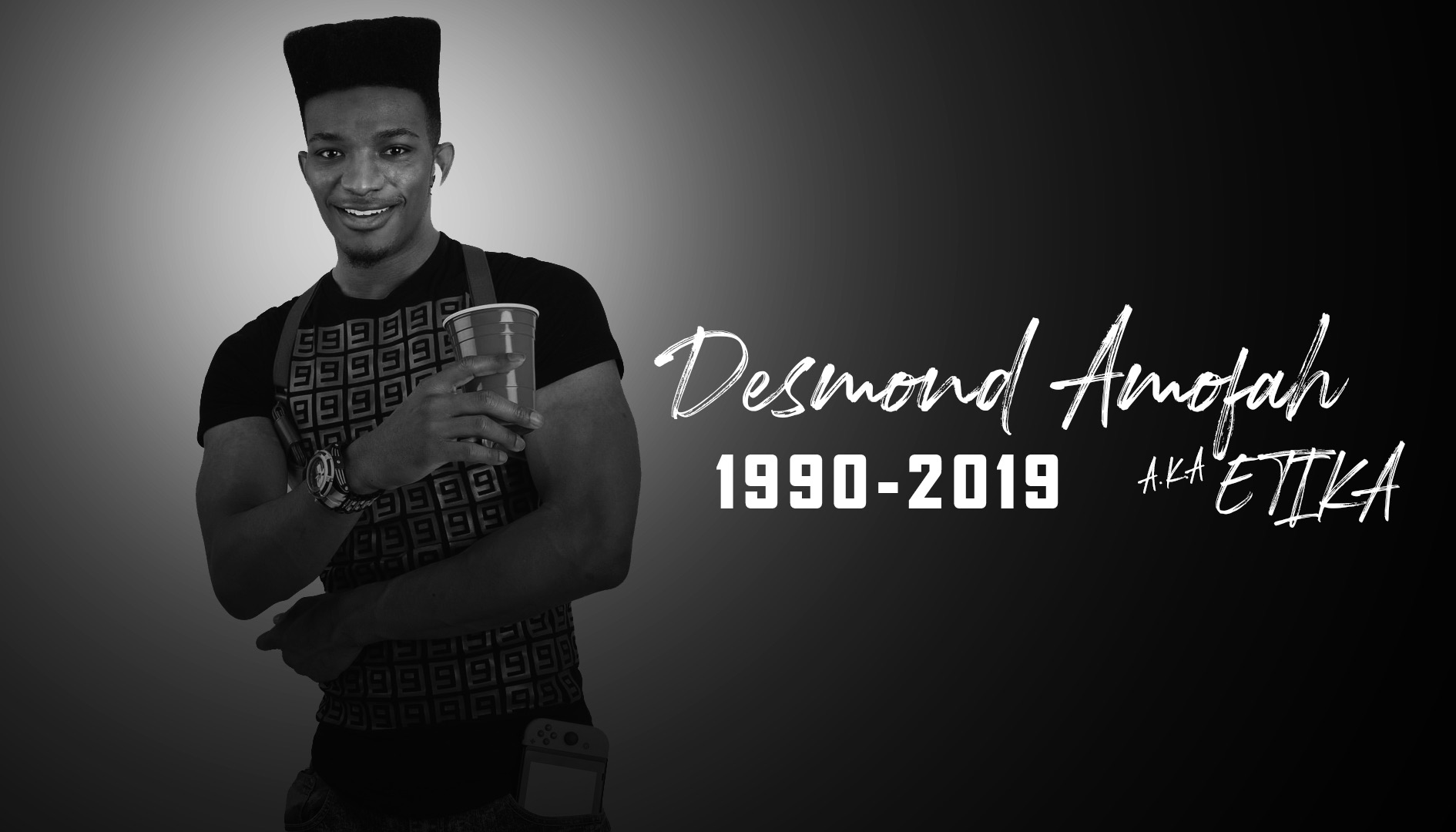 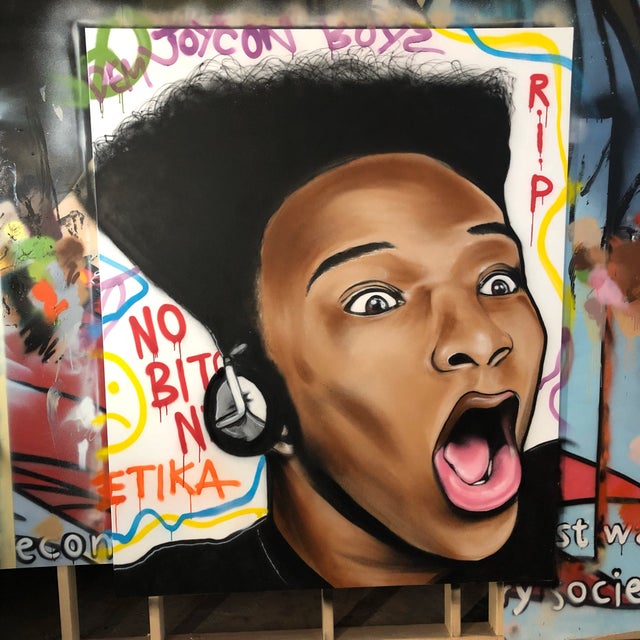 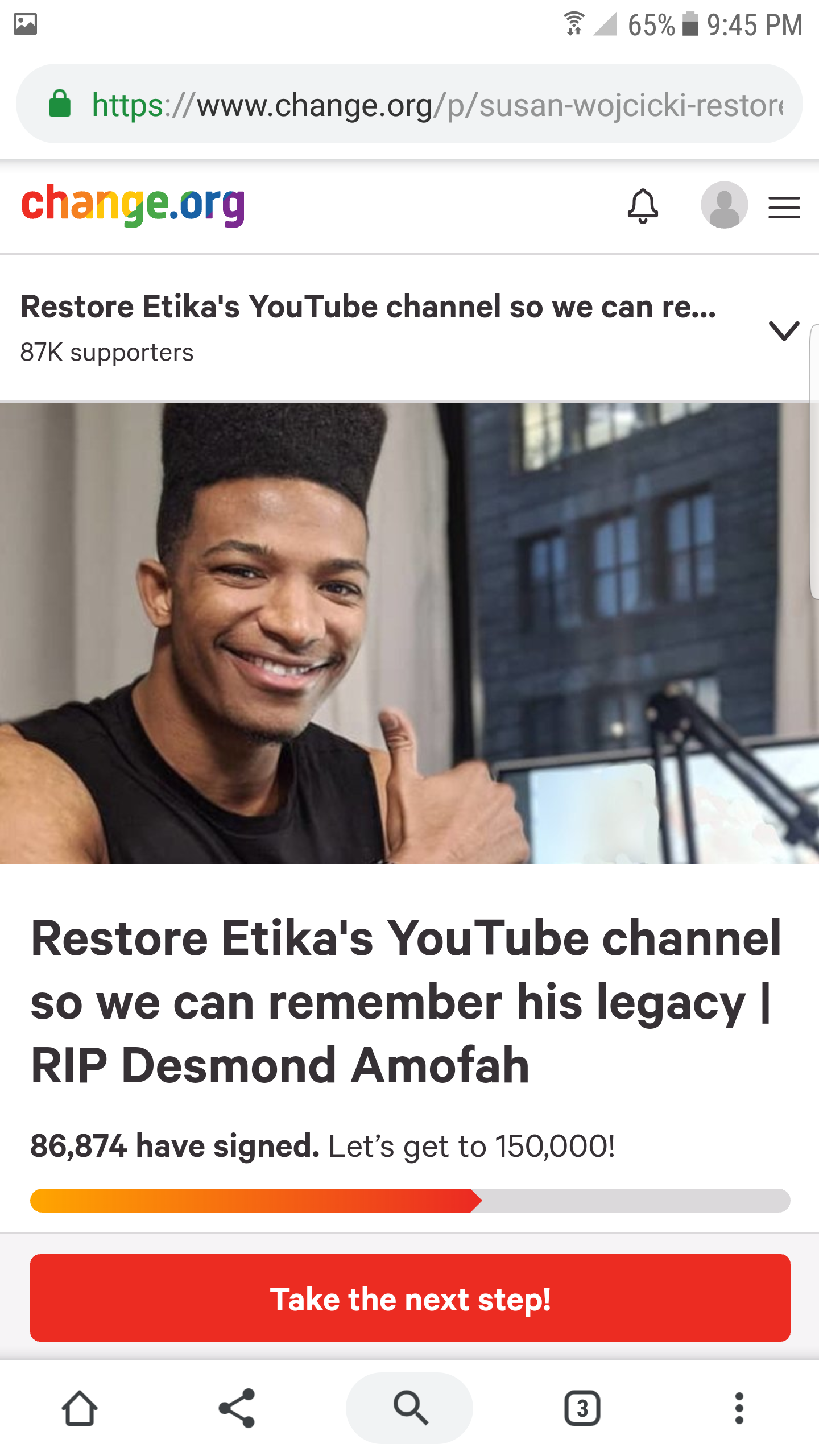 Check out Know Your Meme for more information. 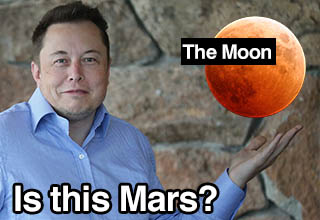