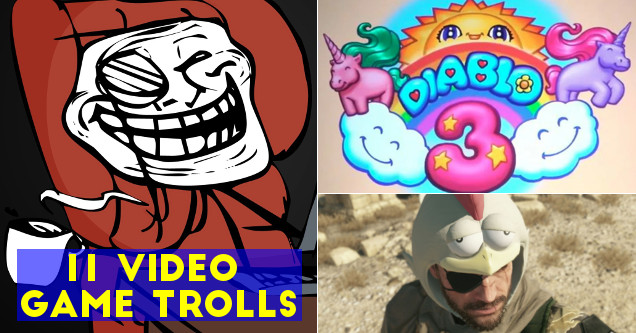 Trolling isn't just something for the internet, video games have been doing it for decades. We've seen Mario do it with poison mushrooms, and gamers do it by crashing virtual funerals.

Here at eBaum's World we love a good troll, so today we're going to look at 11 times developers found clever ways to mess with gamers. We'll also include honorable mentions at the bottom to add any that you mention in the comments section.

Smack dab in the middle of the Batman: Arkham Asylum journey the game threw a curveball at gamers who thought they had everything figured out. While investigating a crime scene as Batman the game begins to seemingly break under its own weight, with distorted audio and fractured level geometry.

Just when you were about to restart your console, the game then reveals that this discomforting experience was the work of Scarecrow, a supervillain known for using psychological tactics to try and break Batman. A big Scarecrow, in-fact. standing at over 80 feet tall, he's a boss you'd soon have to deal with.

The whole sequence was bizarre and made us question the sanity of the developers, but I'll be darned if we didn't remember it for a very long time.

When Diablo 3 released it was subject to intense controversy. Some of the debate was regarding the game's server issues, a lot of it was about the introduction of the auction house (that was later removed), and even more of it was about how the game forsaked its roots by going with casual gameplay and a visually appealing design.

So what did Blizzard do? Well, it designed a secret level that was bright with rainbows, unicorns, and and teddy bears. Called Whimsyshire, it was exactly the sort of thing you would never expect to see in the desolate world of Diablo.

Soon, everyone wanted to go there, and Blizzard had once again managed to make its faithful but critical audience laugh.

If you've played any game with moral choices, you've certainly played around with being evil. Why wouldn't you? Isn't that the point of video games?

Players who reached the Dragonlord, one of the game's most ferocious creatures, were offered the ability to "rule half the world" if they were able to beat him. Players who declined the offer could continue their journey in peace. However, anyone who took the Dragonlord up on his sinister offer were met with a surprise.

Let's put it this way, the game menu would turn blood red and the game would freeze. You'd soon be left with no option but to restart your console and load your last save.

At this point it's become clear that developers can't do much about game piracy. It's pervasive, and not even hardcore DRM has been able to thwart it.

Knowing this, the makers of the popular Game Dev Tycoon decided to try something different. They intentionally uploaded and hosted a custom build of the game on torrent sites that appeared to be just like the original game. However, as players spent hours working their way toward releasing virtual games, they came to find that their creations were being pirated. With cash flows seriously jeopardized, they'd eventually run out of capital and lose the game.

If there's one thing I remember about the retro classic Ghosts 'N Goblins, it's that it was a tough game. We're talking throw your controller into the wall level of difficulty.

To make matters worse, anyone who got to the "end" of the game would learn that everything they had just done was an illusion, and that they would have to go back and beat the game a second time in order to get a real ending. Oh, and the second playthrough was even harder.

Needless to say, most players never bothered getting the "true" ending.

Grand Theft Auto has never been afraid of taking shots, and GTAV certainly carried the torch with pride. While many of its trolls were obvious, its Scientology gag was far more subtle.

The missions were part of Michael's "Strangers and Freaks" questline, and were called "Epsilon". As you came to learn, Epsilon was a religion/cult in the game filled with people who should be in an insane asylum.

These missions, which were clearly throwing shade at Scientology, were by far the most boring missions in the game. We're talking a five mile run through nothingness, monotonous dialog, and being required to wear "Epsilon Robes" for nearly two weeks straight.

Major spoilers ahead. You've been warned.

While there are some serious trolls in just about every Metal Gear Solid game, nothing was more impactful than the ending of Metal Gear Solid V: The Phantom Pain. After playing through the 40+ hour game, of which most of the story was extremely disappointing, you came to find out that you weren't even playing as the character you thought you were.

Yup, the main character wasn't Big Boss, it was "Venom Snake" (a.k.a. Medic).

Let's just say that this was such a hardcore troll that I changed my gaming alias within hours of seeing the ending. Screw you, Metal Gear.

During a time when Mortal Kombat was one of the most popular arcade games, Midway made some serious attempts to have players spend time trying to find things that didn't actually exist.

As it turned out, none of these three characters would ever be playable in these two games. Staff at Midway later stated that they drew out these easter egg hunts to have gamers spend lots of quarters at arcades. It made them a fortune, too.

The popularity of Penn & Teller isn't a recent phenomenon; the magical duo have been in the headlines for decades. So you can imagine that when they released their first branded video game in 1995, it caught a lot of attention.

The game was an assemblage of mini-games, the most notorious of which was "Desert Bus". This sent you on a journey through the nothingness of the American midwest in a Truck, tasked with keeping it on the road.

Those who played it soon realized that the drive was long... very long. In-fact, it was eight hours of nothing but keeping the truck on the road, and some players stuck around for most of that trip thinking something interesting would happen. Nope, it was just eight hours of nothingness, and then an eight hour drive back.

We've seen some insane collectibles over the years, none more monotonous than The Legend of Zelda: Breath of the Wild's 900 Korok Seeds. These items, that are scattered around the game world and typically found through puzzles or in hidden areas, were used to increase your inventory space.

Early on it's hinted that there are a lot of them, and that you should try to complete the 900 item collection. Well, if you bothered, then chances are at some point you gave up, because it required dozens of hours of running and searching.

If you did give up, then good on you. As it turned out, the reward for getting all 900 was a turd-shaped object that had the following description:

A gift of friendship given to you by Hestu. It smells pretty bad.

Among the Genesis/Master Drive's most popular games was X-Men. This game was pretty straightforward, but notoriously challenging (even moreso than other games during the era).

So when the game showed a bizarre debug menu saying "System Reset, Virus Program Suspended" after you beat a disgustingly hard boss, you can imagine that players were conflicted. Many wondering if you really needed to turn the console off then back on, or if they did something wrong. Others thought that was the game's ending.

What players actually needed to do was lightly tap the "Reset" button on their console. Press it too hard and you lost all your game progress; there were no save feature for this title.

Very few people actually figured out how to do this, leading to a lot of frustrated players who never beat the game. 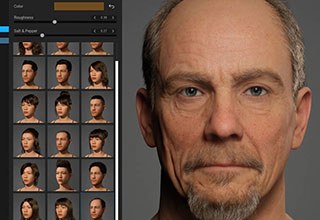