The adult content creator, and Twitch streamer Amouranth, is posting Ls on Twitter today, as she's lost multiple polls pitting herself against gaming hardware. The streamer has recently stated that she is interested in creating more Twitch gaming content instead of the adult content she's known for, after regaining control of her platform from her abusive husband.

Choose wisely, you might get what you wish for

Despite attaching that poll to some seductive pictures, fans were still more eager for the PS5 at a 64.5% clip.

I clicked ps5 and im an xbox fan boy. Not sure what that says about me.

What's the difference between @Amouranth and a ps5? One is hard to get your hands on.

After her poll concluded, Amouranth decided to up the ante, and create a new poll with new terms. This time, it was her, or a gaming PC. At the time of this writing, the poll still has seven hours left, but results are leaning even more overwhelmingly in support of the gaming PC, at about 74%.

A PC has more natural parts. So I choosen that.

While these polls are all in good fun, they serve as a reminder that nothing comes between gamers and their hardware. Not even Amouranth. 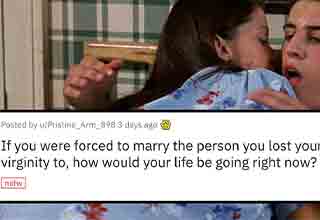 NEXT ARTICLE How Different Would Your Life Be If You Married the Person You Lost Your Virginity To?