The internet and online gaming world has been buzzing non-stop since streaming service Twitch announced that Dr. Disrespect had been banned from the platform.  Giving no official or exact reason, the company said:

"As is our process, we take appropriate action when we have evidence that a streamer has acted in violation of our Community Guidelines or Terms of Service. These apply to all streamers regardless of status or prominence in the community.”

Here is a 30 second clip of the end of what would be Dr. Disrepect's final stream on Twitch.

This is the last 30 seconds of @drdisrespect’s last stream...

The drama kicked off about 24 hours ago / Friday evening when a twitter user shared this tweet, which prompted a ton of replies.  The account also made it clear that this was not a copyright or DMCA issue. Twitch has since refunded donations and memberships to Champions Club members after terminating their contract with Dr. DisRespect.

Sources: DrDisrespect has been permanently banned from Twitch

look: for several hours now I have been told from credible sources the reason DrDisrespect has been banned. however due to the importance and sensitivity around the subject I have refrained from going on it. i don't feel comfortable with it currently

This video of the last 8 minutes of Dr. DisRespect's final stream on Twitch, appears to show his demeanor change while he seems to be reading a text message or possibly an email. The video ends abruptly with Dr. DisRespect screaming "F**K!", right before his stream-outro begins.

watching a video of the last 8 minutes of todays DrDisrespects stream, he changes behavior abruptly and mumbles out an extremely odd ending

Amidst the speculation, Dr. DisRepect's wife dropped the following message, however, Dr. DisRespect has yet to address the controversy.

"The outpouring of love, support, strength, and kindness has truly been overwhelming. You all have made my heart full and I can not thank you enough. No one better out there than the CC. You guys are amazing! Much love to you all."

Doc and his wife have been through some hard times as he had previously publicly apologized for cheating on his wife with a woman he met through his gaming career. 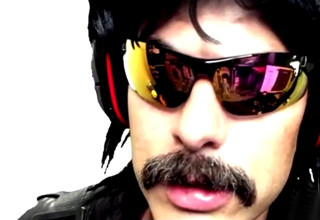 NEXT ARTICLE Dr. DisRespect Allegedly Cheated With 4 Women, Starting Before He Was Famous