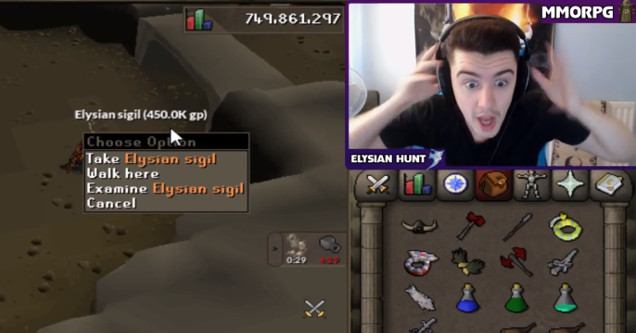 For as long as there have been video games, there have been rare items. If you've played an MMORPG or a game like Diablo before, you've undoubtedly dealt with low drop rates and painful grinds. As rough of a process as it is, the explosion of excitement that overcomes the body once you find what you want makes it all seem worth it.

While livestreaming this week, Twitch streamer MmorpgRS reminded us what it's like to experience the climax after a huge farming session. After spending an average of eight hours per day the past two months trying to farm the Elysian Sigil from RuneScape's Corporeal Beast, the item finally dropped. His reaction is exactly what you'd expect from such an occasion.

This was no ordinary moment; the Elysian Sigil is listed as having a 1/4095 drop rate on an enemy that took a well-equipped MmorpgRS around 10 to 12 minutes to kill on average. Even then, he had to kill the enemy 6,061 times (confirmed in the chat log of the video below) before the item he was looking for dropped. That averages to around 66,000 minutes, or 1,100 hours of painstaking work.

You could tell how big of a moment it was from the Twitch chat. His viewers similarly erupted with energy as if they were going Super Saiyan, probably because they've witnessed him spending all of his free time the past two months mindlessly killing Corporeal Beasts for this moment.

Here's what one of his fans had to say about the video:

Comment from discussion [LOUD] When you complete a 1500 hour item grind.

The Elysian Sigil goes for around 531 million coins on the current RuneScape market, which has a real money value of around $600 to $800 USD. However, he can't trade the item in Ironman mode, which prevents transactions with other players. Hence why he had to farm it himself.

Although I've never spent so much time farming one item, I did experience a similar addiction while playing Final Fantasy XI. During my time camping the notorious monster Valkurm Emperor for its Emperor Hairpin back in 2005, I ended up spending a whole day running around in a small area waiting for him to spawn. At first, my plan was just to stick around for an hour, but I ended up investing 11 hours of my life doing nothing but hoping to kill this virtual enemy. Thankfully, I was lucky enough to eventually claim him against a handful of other people (including Chinese gilsellers) and get the drop, which at the time was valued at around $80.

The things we do in video games will never make sense. 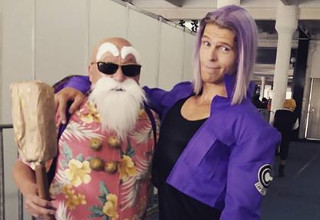