The streamer Adriana Chechik has suffered a broken back after jumping into a foam pit during TwitchCon in San Diego. The foam pit, which was part of a promo collaboration between Intel and Lenovo, claimed multiple victims throughout the night. Chechik later tweeted that she is getting surgery to place a meter rod in her back for support after breaking it in two places.

Adriana Chechik (@ChechikTv) looks seriously hurt after jumping in the foampit. Looks like #TwitchCon cheaped out on the padding and amount of foam. pic.twitter.com/BRPSs1EKVI

Well, I broke my back in two places and am getting surgery to put a meter rod in for support today. Send your support. When it rains it pours and I am definitely feeling the rain right now.

On the surface, the foam pit looks like a good time, and Chechik tries to take advantage by jumping and pulling off a rather impressive split in mid air. Her landing goes full force into her tailbone however, thanks to the fact that the pit has maybe three layers of foam cubes. A fact that resulted in numerous other injuries throughout the event.

My friend @loch_vaness dislocated her knee in this thing pic.twitter.com/AiLJH5B24Q

2nd streamer to break something this #TwitchCon2022 :\ pic.twitter.com/4C4p1ii1iy

The foam pit remained open before and after Chechik's injury, although it has since been closed down. Organizers cited participants consistently breaking the rules as part of the reason they decided to close down the attraction. All foam pit goers were forced to sign a waiver before being allowed in.

Whether or not participants were following the rules of the foam pit, there was obvious miscommunication that lead to some serious injuries. It will be interesting to see if there is subsequent legal action taken. In the meantime, let us learn from the mistakes of others, and remember to check the depth of a foam pit before jumping. 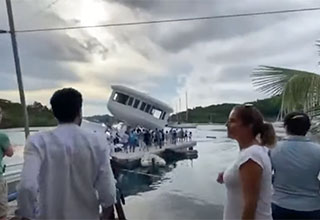