The trailer for the new Mario movie has finally dropped on Nintendo Direct, and live at New York City Comic-Con. Fans of the iconic game franchise cheered with excitement throughout the showing, which included an introduction by creators and cast, and an in person cameo from Jack Black.

Nintendo has been keeping many key details of their project under wraps, leaving fans speculating on elements like plot and title, which we now know to be simply, The Super Mario Bros Movie. A single image teaser two days ago did nothing but create controversy over Mario's distinct lack of thicc cheeks, but after the trailer he’s missing something even more important.

Ever since his casting was announced, fans have wondered how non-Italian Chris Pratt would imitate the voice of our favorite mustached plumber. The answer is that he won’t. Sporting a voice that sounds… well exactly like Chris Pratt’s, Mario’s Italian accent will not feature in The Super Mario Bros Movie, and it’s all fans can talk about.

me listening to chris pratt's voice come out of mario's mouth pic.twitter.com/yH3IKPjMBm

Being in a room surrounded by screaming fans emphasized just how much people care about this movie, and Jack Black stole the show. Entering the stage to flashing lights while swinging a Bowser themed backpack, he gave a live sample of his Bowser, and stated that his preparation for the role involved just sitting down and playing through all the Mario games.

The Super Mario Bros Movie looks like it will feature fantastic animation, solid humor, good performances, and a plot consistent with what you’d expect from a movie based on the Mario video games. As the April 2023 release date draws nearer we’ll undoubtedly learn more about the project, and perhaps get a better idea on if Pratt’s voice was the right call. 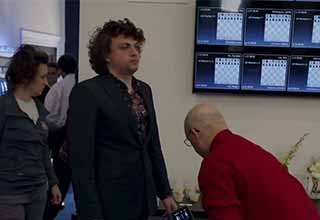