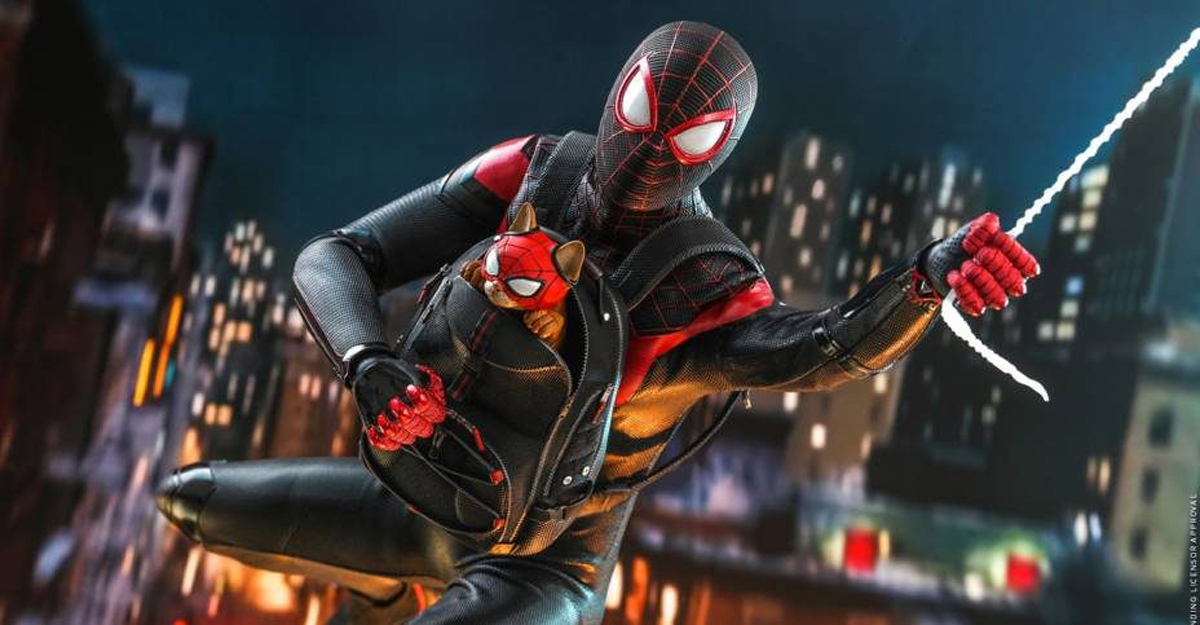 Spider-Man Miles Morales gives players a chance to enjoy a bit more of the Marvel universe with a few hidden extended references.

If you want to find all these Easter eggs (and there's a lot of them) here's a guide to find every Easter egg in Spider-Man Miles Morales.

These include hidden references to The Avengers, X-Men, Black Panther, and a grand gesture to the godfather of it all, Stan Lee. 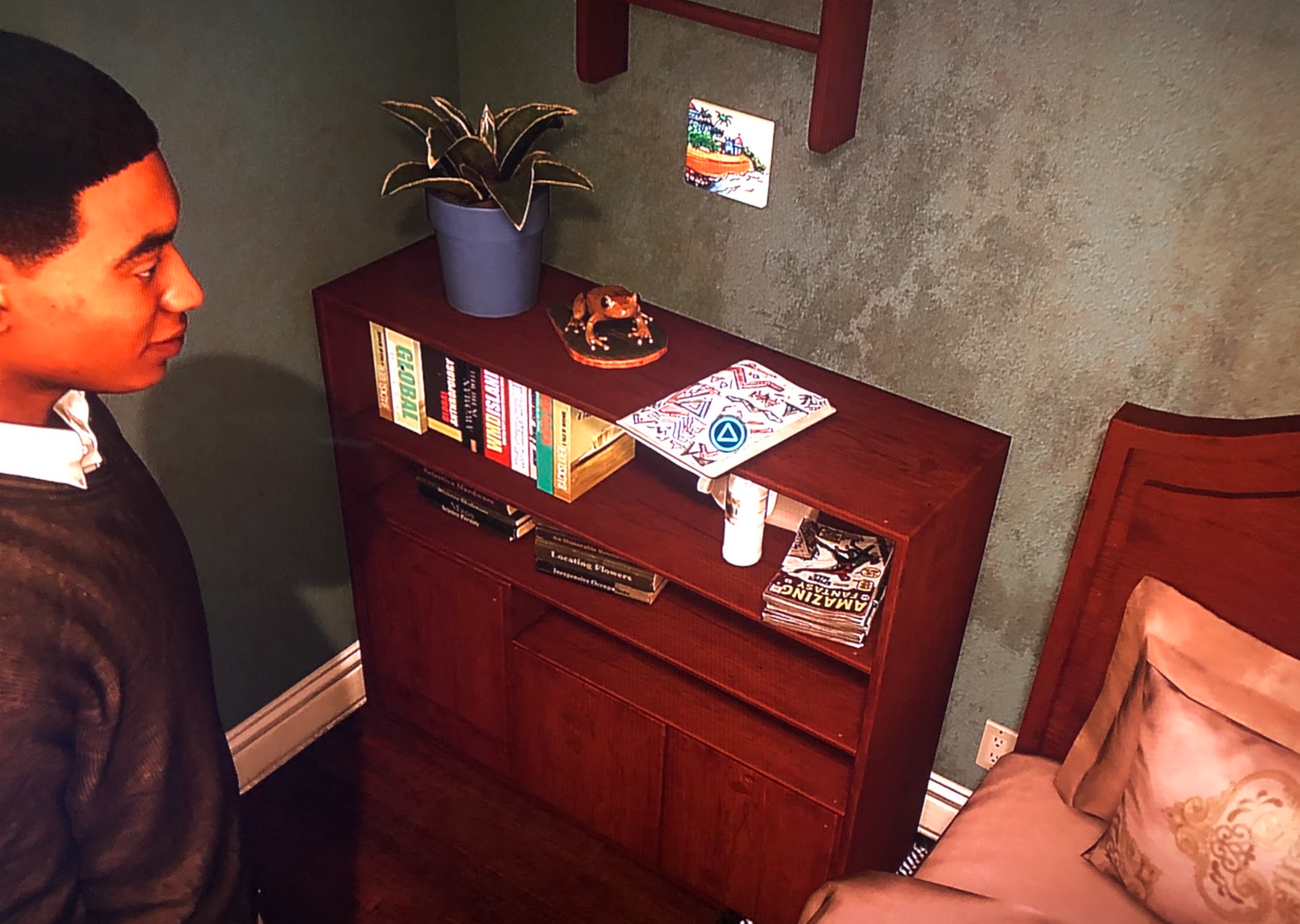 Spider-Man’s story began with his first ever comic appearance in Marvel Comics’ Amazing Fantasy, no. 15 (1962).

During the “La Nochebuena” mission, in the beginning of the game, Miles settles into his apartment in Harlem.

In his room, on the 2nd shelf of the table next to his bed, players can spot the very same issue of Marvel Comics’ Amazing Fantasy comic book that began the story of this game. 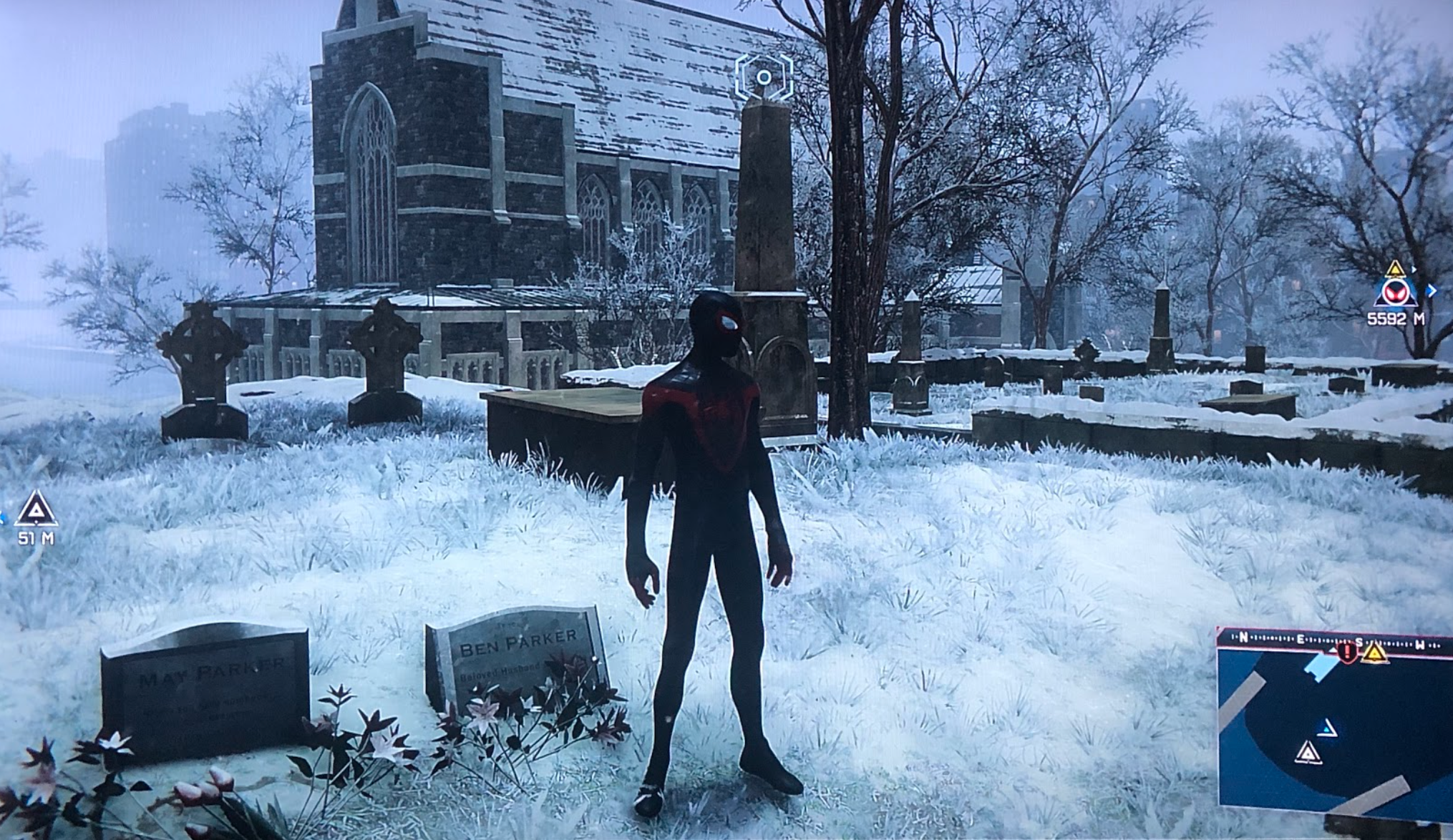 In Spider-Man PS4, players were able to visit Uncle Ben’s resting site. May Parker was laid to rest at her husband’s side, and players are now able to pay their respects to both of Peter Parker’s late relatives in the cemetery on the north-eastern side of Harlem’s district.

Miles’ father, Officer Jefferson Davis is buried near the Parker’s grave sites with flowers set on both sides of his tombstone.

Players can unlock the Never Give Up trophy after paying respect to Officer Jefferson’s resting site. 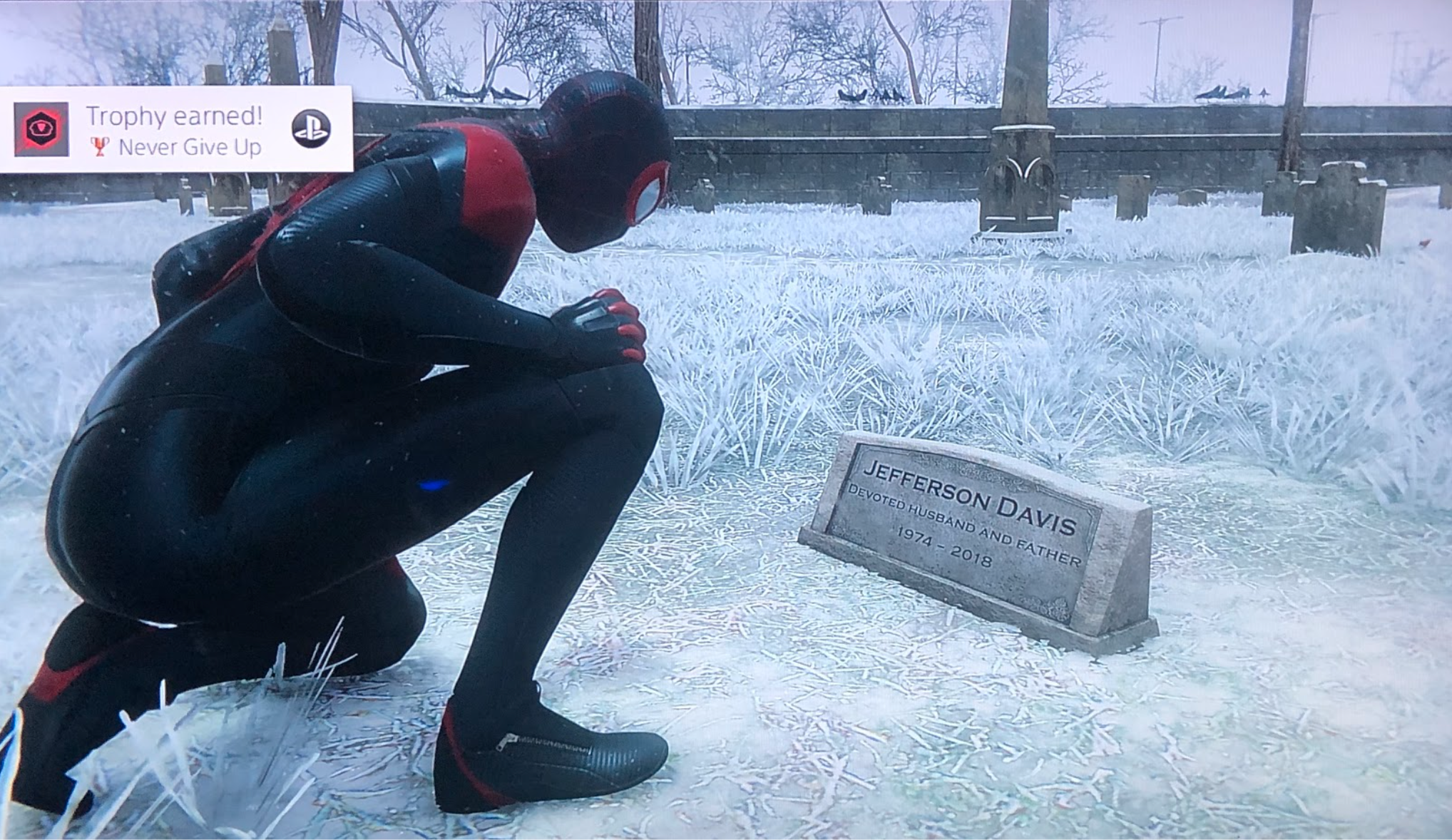 Known for his creatively humble cameos in the products of his creations, the late mastermind of Marvel Comics, Stan Lee, made his appearance as a fry cook at Mick’s Diner in the Spider-Man PS4 game.

Visit that very same diner to find a monumental statue placed in front to honor the memory of the “real life hero.” 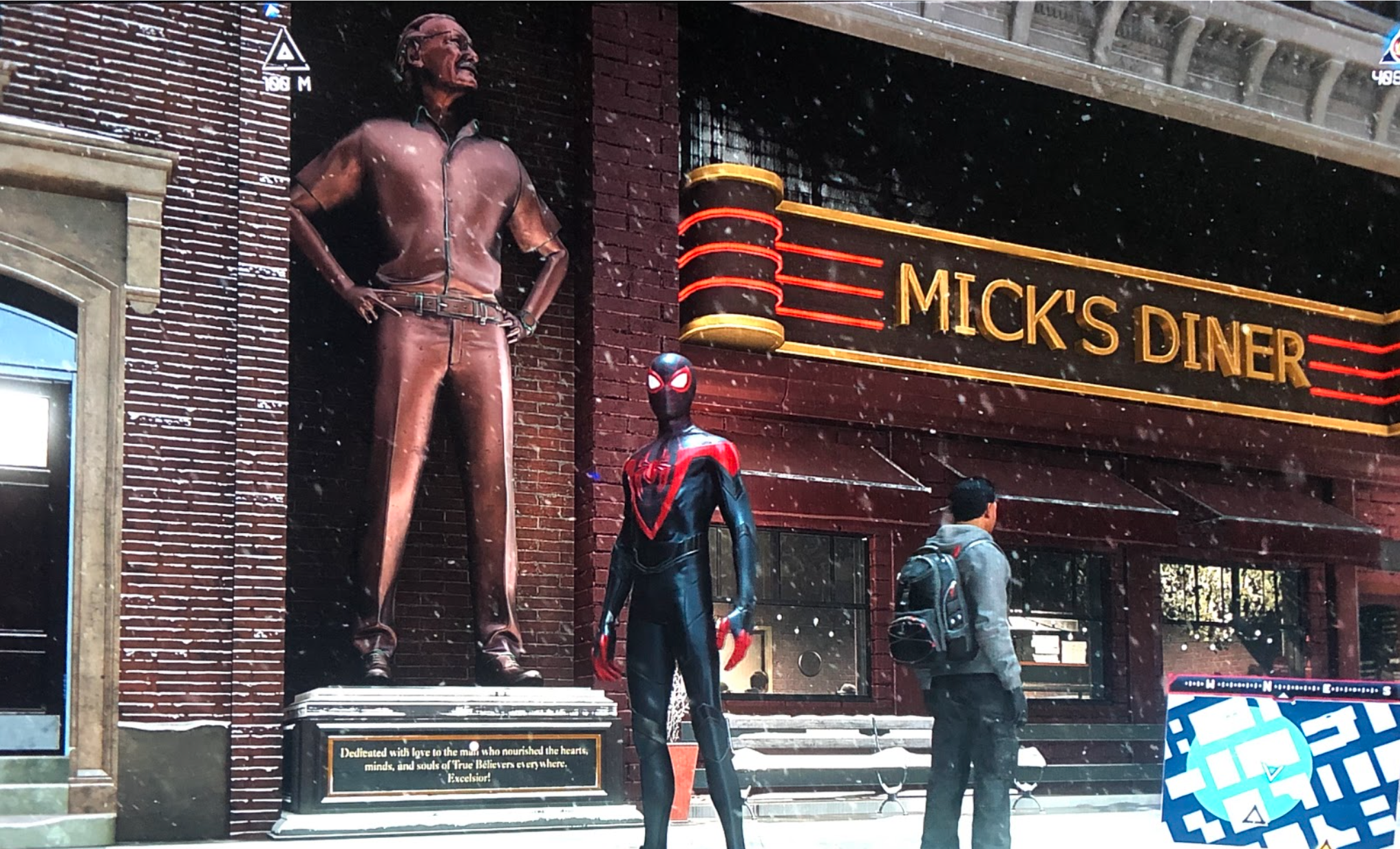 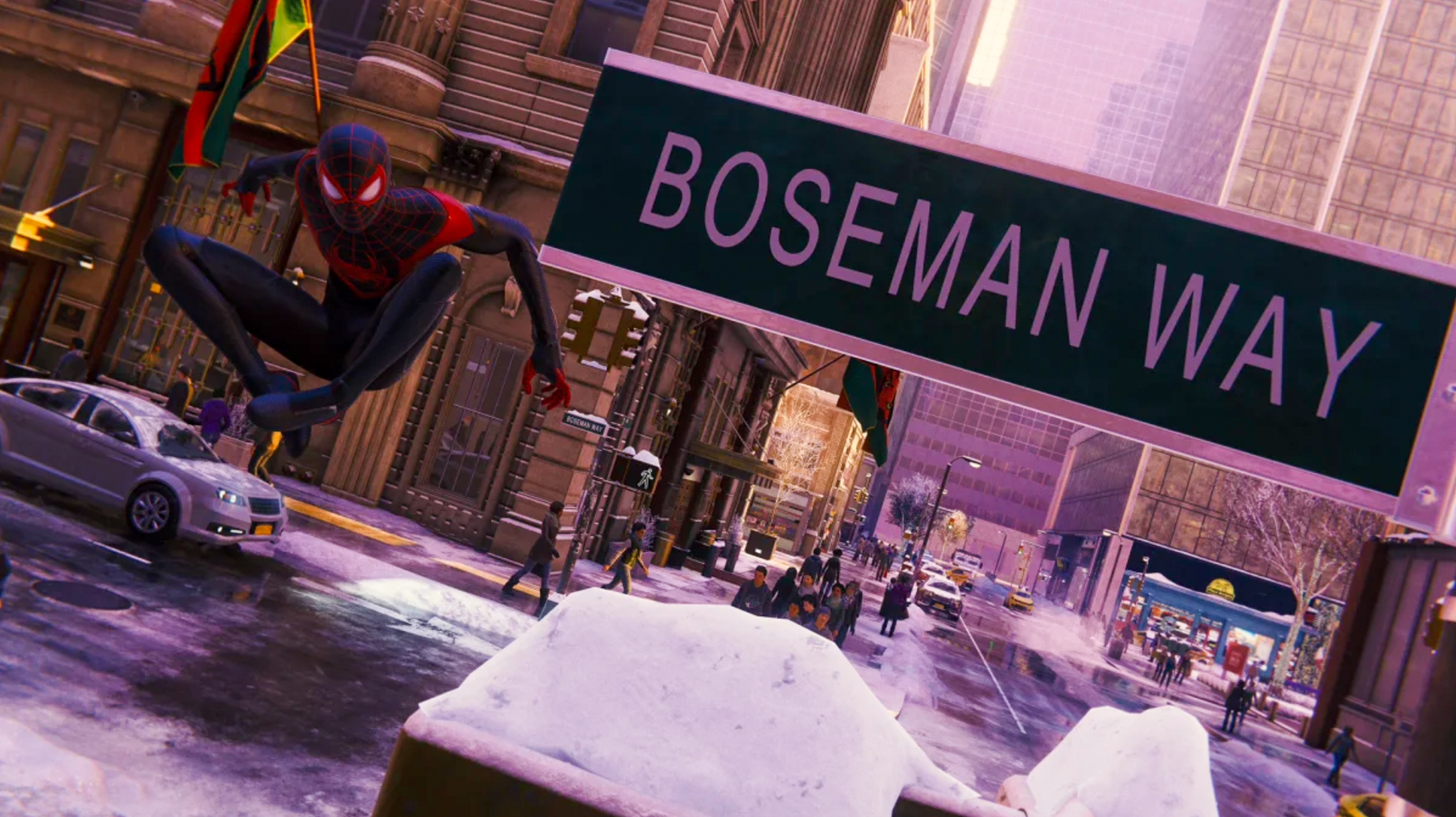 Located in Midtown, players can visit the Embassy of Wakanda, which was a landmark in Spider-Man PS4 that players were able to visit and take pictures of to earn experience points.

In the ending credits, Insomniac Games pays tribute to the late Chadwick Boseman with a touching quote:

“IN LOVING MEMORY OF A NOBLE KING, CHADWICK BOSEMAN, HIS HONOR, STRENGTH, AND COMPASSION WILL REVERBERATE FOR GENERATIONS TO COME. WAKANDA FOREVER” 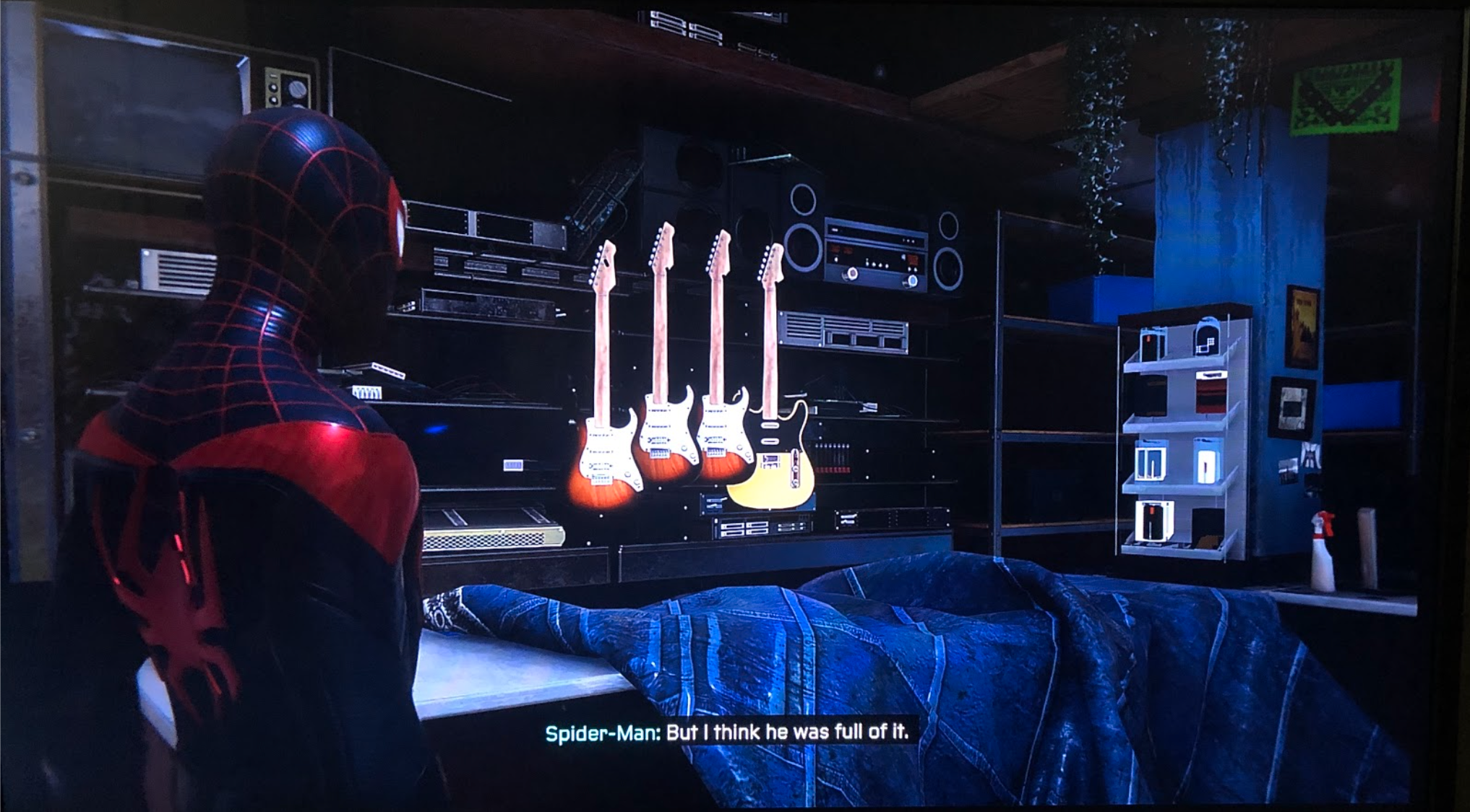 Alison Blaire a.k.a. Dazzler is a character in the X-Men series and made a cameo in X-Men: Dark Phoenix.

During the game’s ninth mission, "Someone Left the Lights On," Miles goes into a flashback while looking for clues on the criminal group known as the Underground in an abandoned repair shop.

In this flashback, Miles remembers the time when he and his friend Phin were working there with Phin’s older brother, Rick. If players navigate through the shop and look at the guitars, Miles name drops an extended Marvel Comics universe character, Alison Blaire. 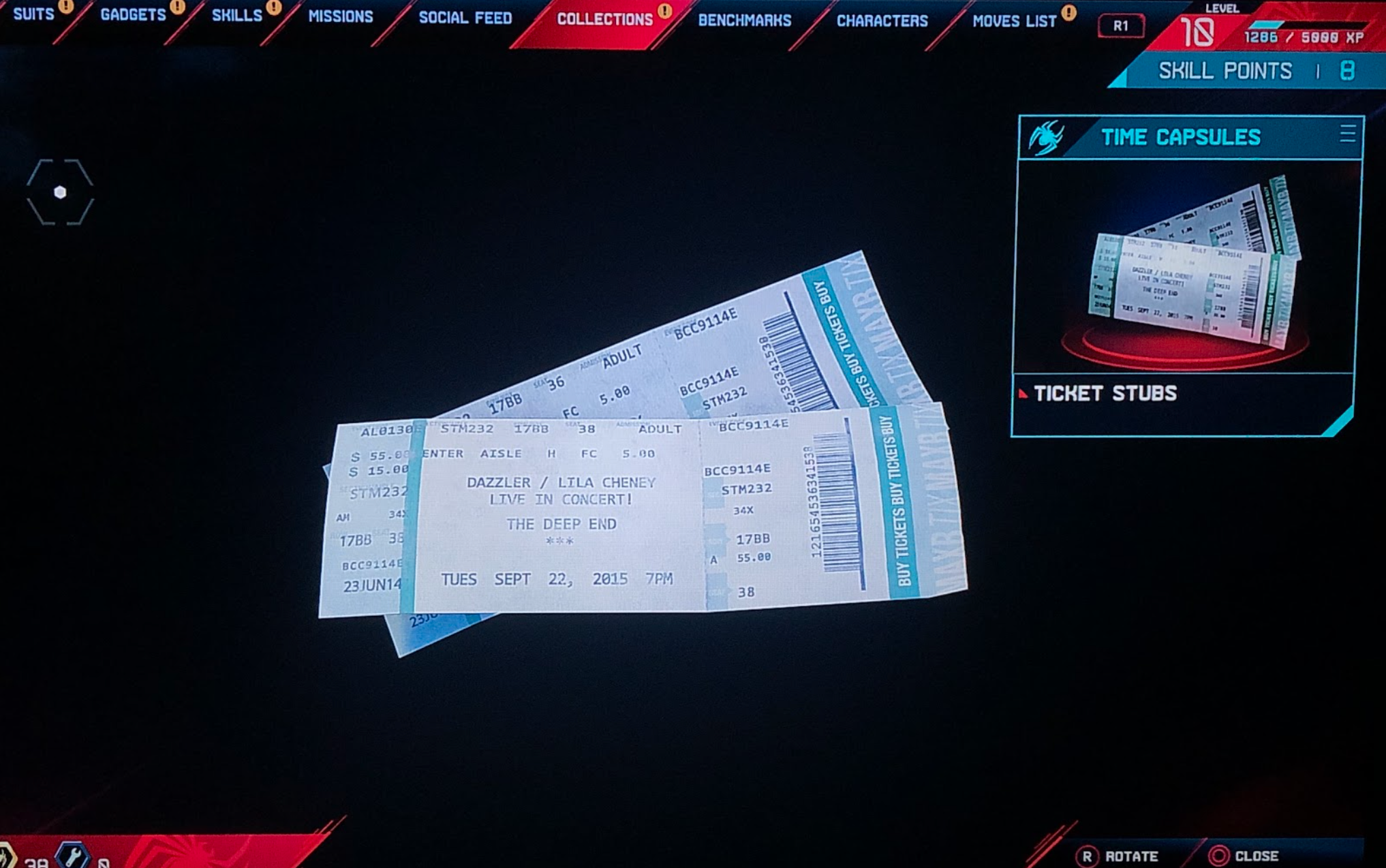 After completing the "Date" mission, players will unlock the ability to discover time capsules.

The locations of all of the time capsules are marked with green circles across the map. Pay attention, because there are a few Easter eggs hidden inside of these bad boys.

Find a pair of Dazzler/Lila Cheney concert ticket stubs hidden in a time capsule located in the Hell’s Kitchen district on the side of a building. They reference the mutant rockstar from X-Men. 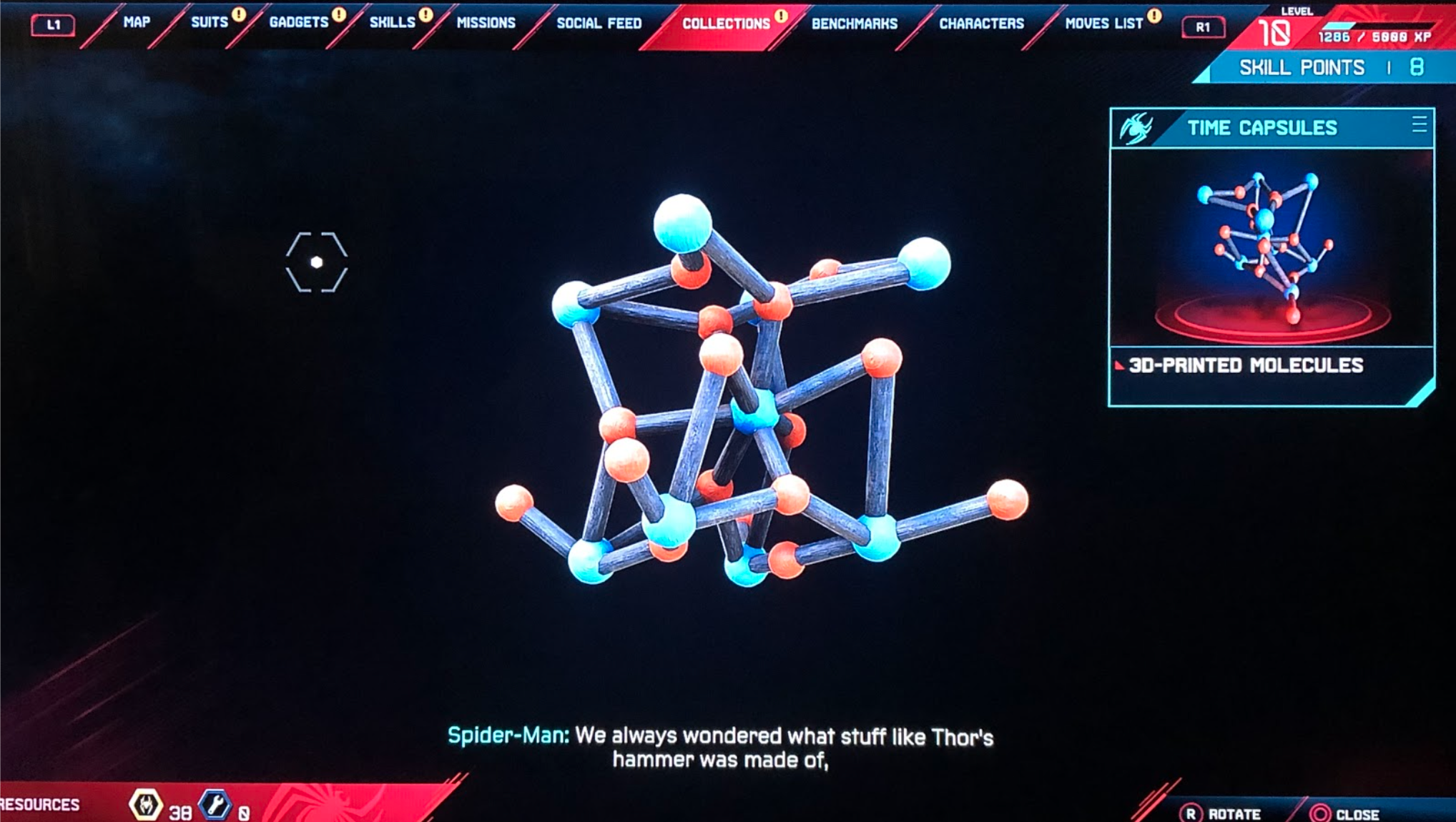 The time capsule located on the far left side of Midtown contains an imaginary molecule that Miles and Phin created in reference to Thor’s hammer, Mjölnir. 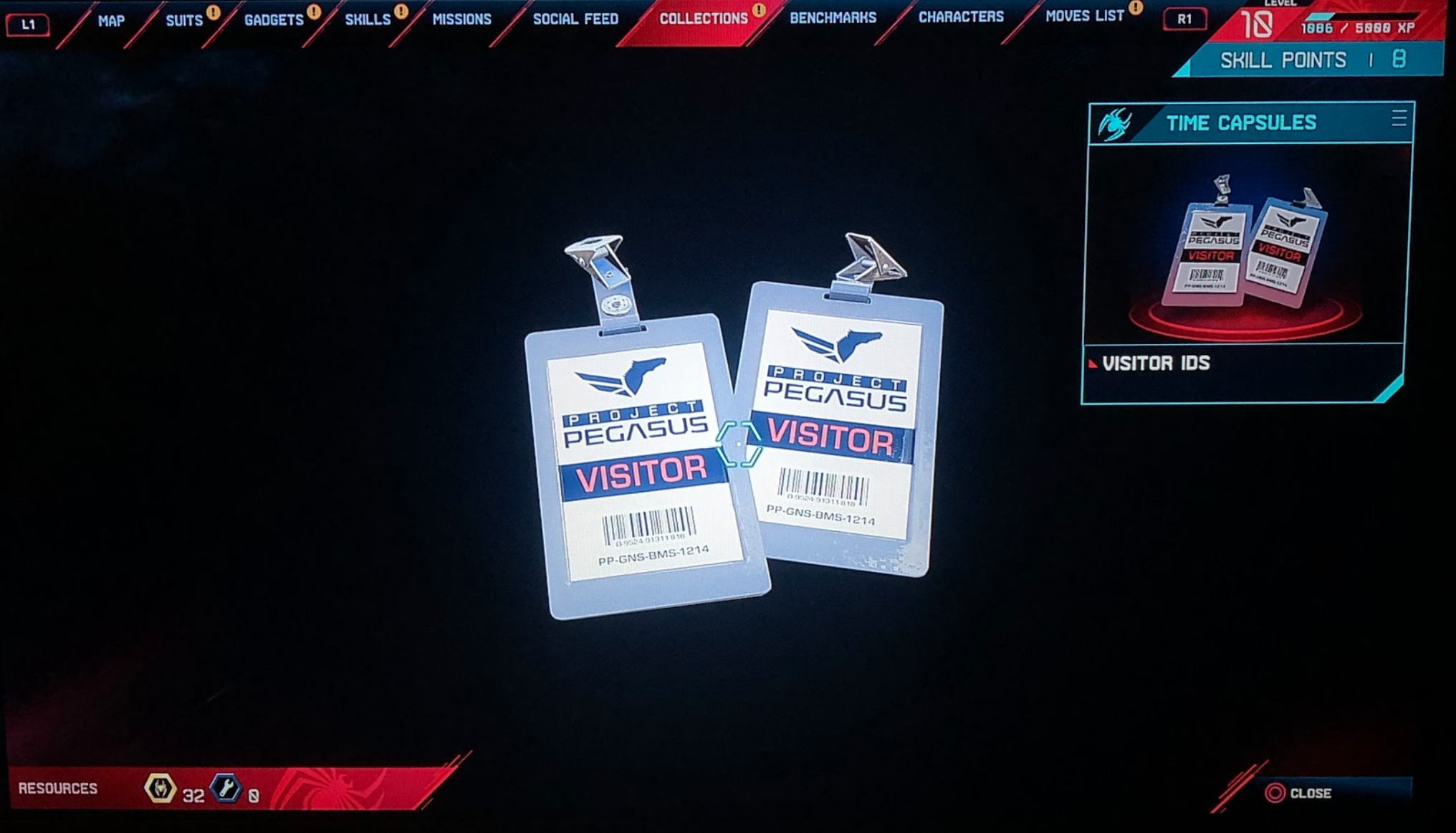 In the time capsule to the right of the Upper East Side district, there are two I.D. badges from an advanced S.H.I.E.L.D research facility called Project Pegasus that Miles got from a tour of Oscorp in the 8th grade. 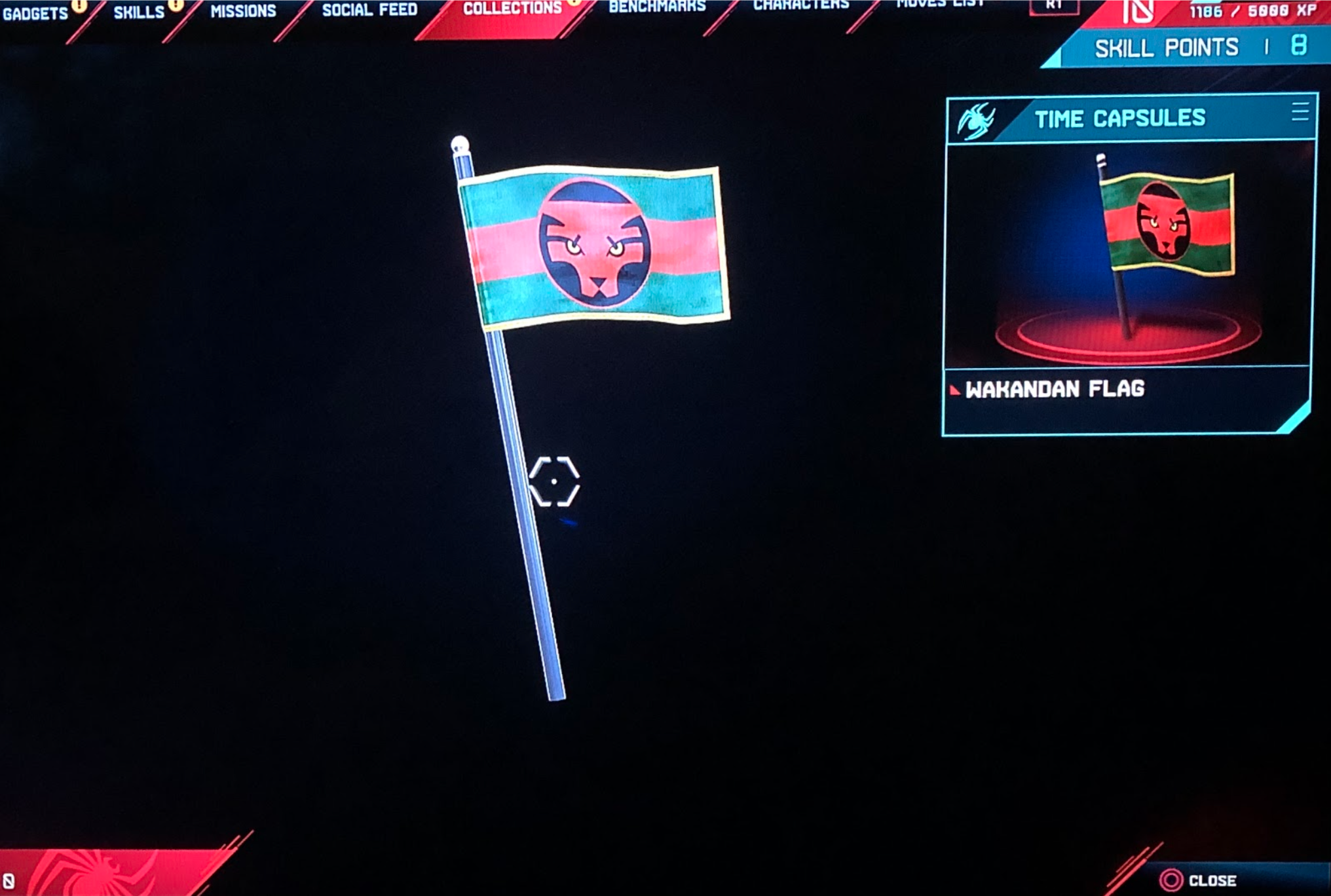 In Harlem, players can find a time capsule with a Wakandan flag hidden inside.

This one can be a bit difficult to get to because it's on top of a moving train. The best way to catch this train is to fast travel to its closest location and quickly swing your way to it. 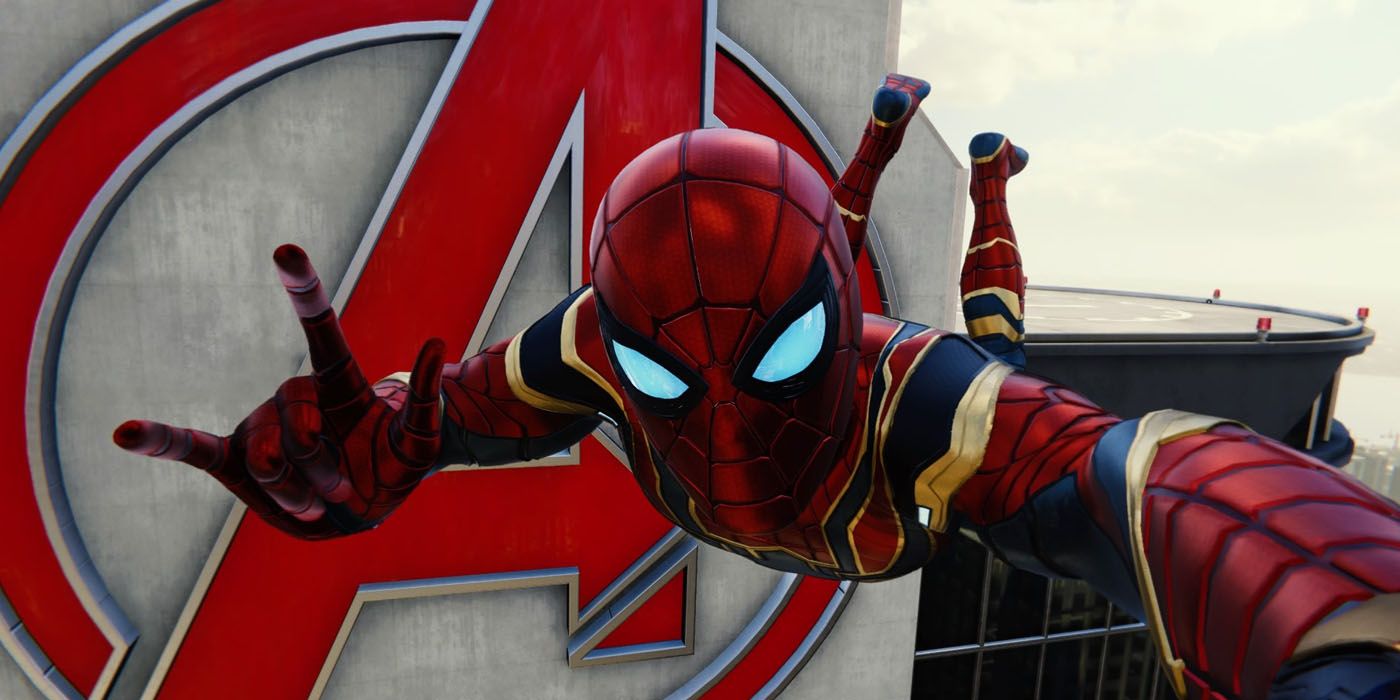 Identical to The Avengers tower in Spider-Man PS4, players can spot the extremely tall tower while web slinging through the city.

There has been a great amount of speculation regarding the upcoming game, Marvel's Avengers being linked to Spider-Man: Miles Morales. Unfortunately, the Head of Creative for Marvel Games, Bill Rosemann debunked the rumor in an interview for Entertainment Weekly. 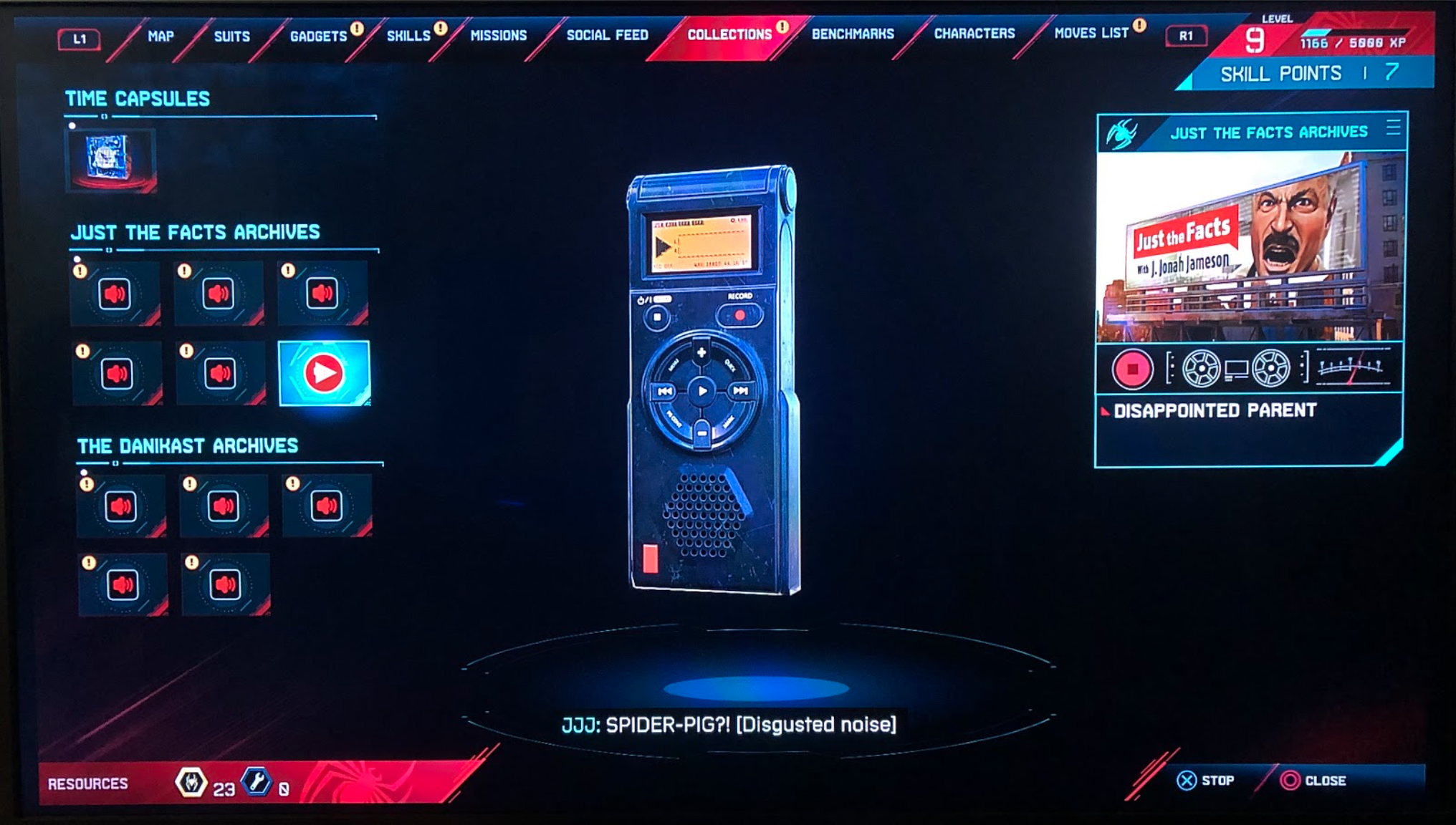 On the tape recorder in Miles’ facts archives labeled “Disappointed Parent,” J.J. Jameson works himself up at the thought of more than one Spider-Man vigilante in the city.

In the midst of his rant, he wonders if a Spider-Pig actually exists and even drops a small reference regarding the multi-verse.

If players are wondering about Spider-Pig’s existence, like Jameson, watch the animated movie, Into the Spider-Verse to find out. 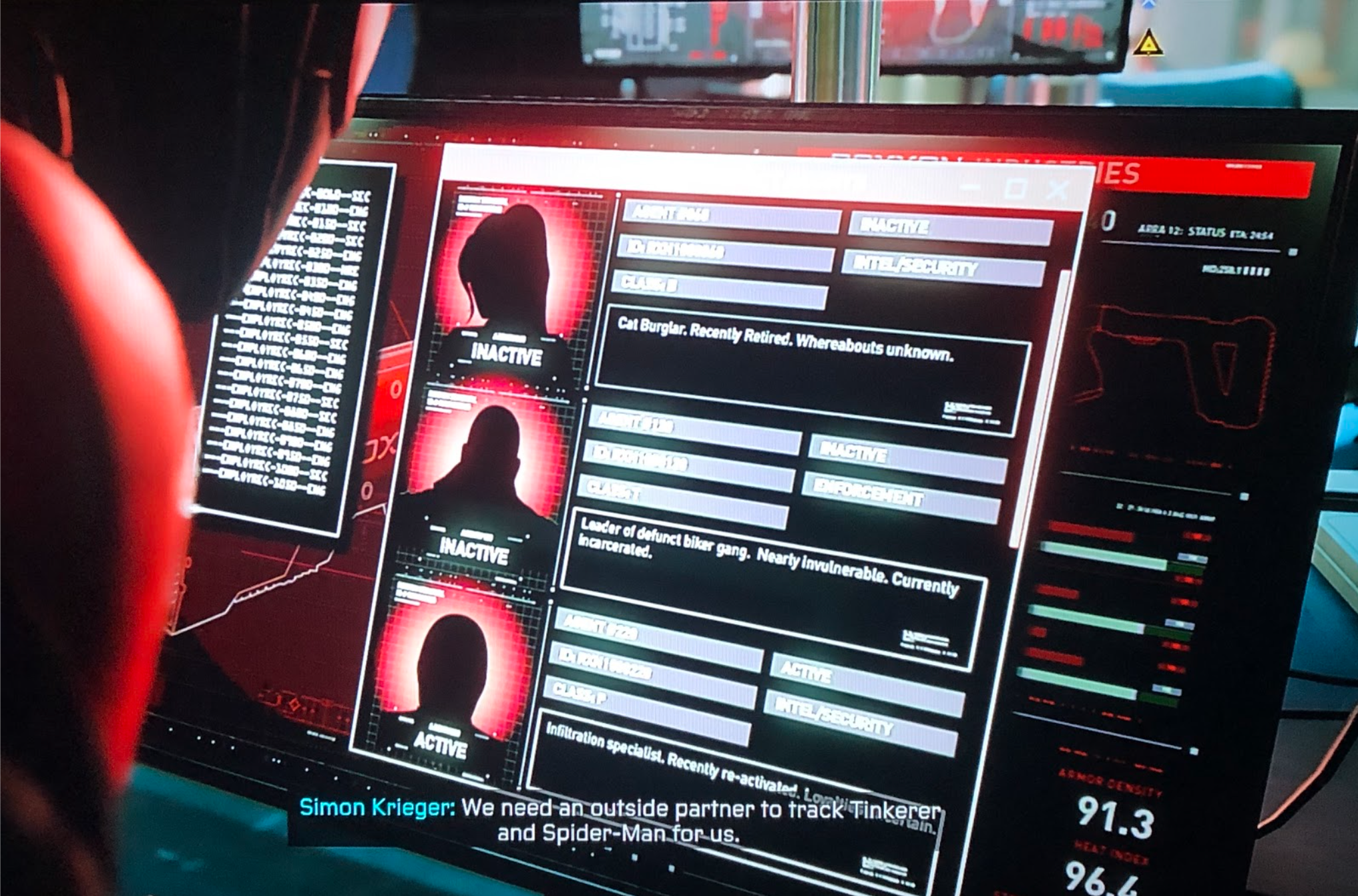 In the mission “Tinker Tailor Soldier Spy,” after defeating the boss, players will gain access to Roxxon’s terminals.

Check the computer screen in the corner to catch a list of Simon’s contacts including a few of Pete’s old friends from the first game, Black Cat and Tombstone. 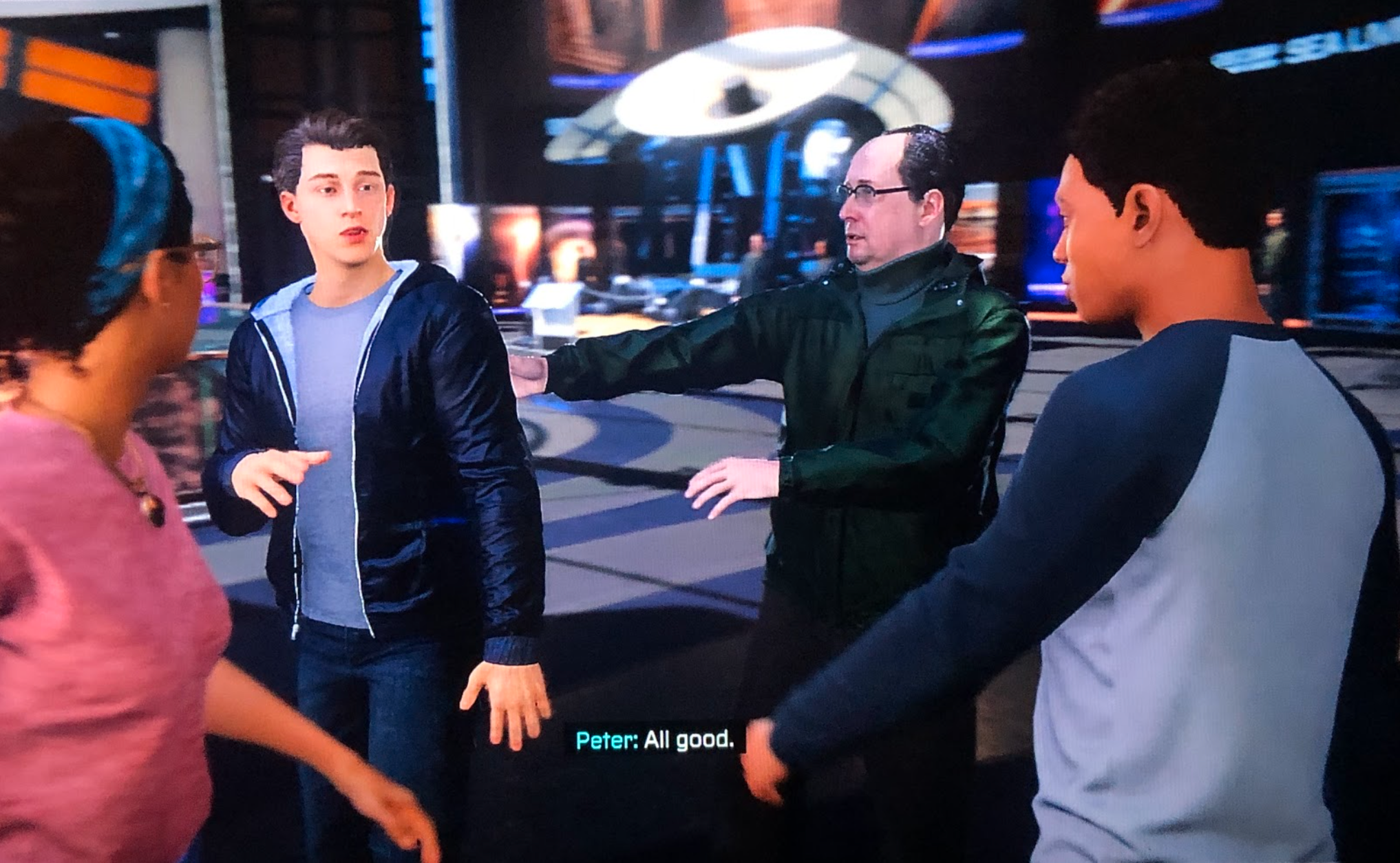 One of the easiest Easter eggs to spot is during the mission “Like Real Scientists,” when Miles has a flashback to the Space Center and runs into Peter Parker and Dr. Otto Octavius.

This flashback takes place before they ever meet each other, so there are no direct interactions with the past characters. But hang out to eavesdrop and listen in on a project Pete and Dr. Octavius are working on that contains memory metal.

WATCH UNTIL THE END 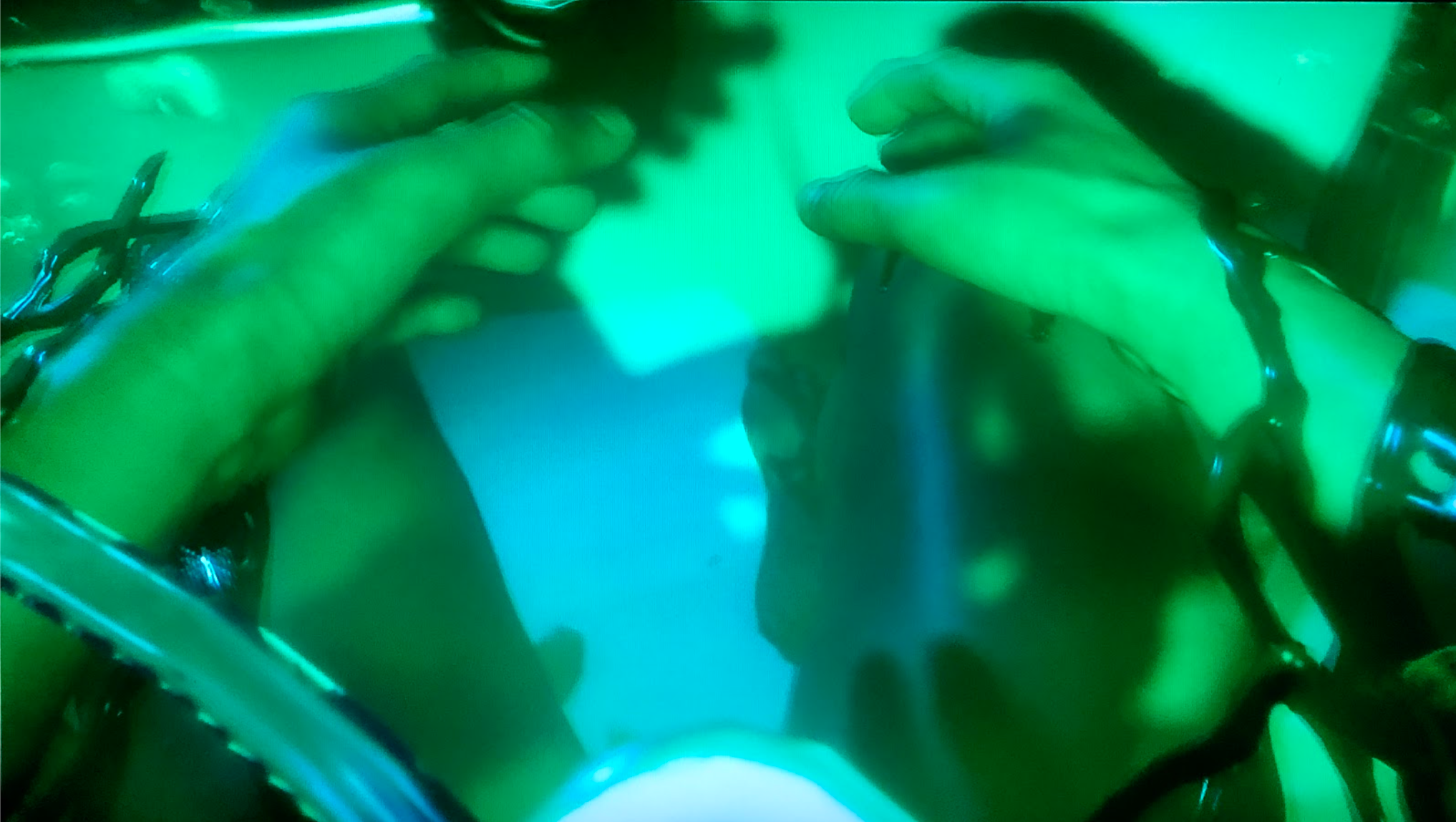 Marvel Comics is known for their Easter eggs after the ending credits of movies. I simply refuse to spoil this one, so just be sure to pay attention to the dialogue, the people who are speaking, and the surrounding settings of the scene.

Turning the subtitles on might make it easier for players to make their own assumptions about what Marvel Comics has in store. 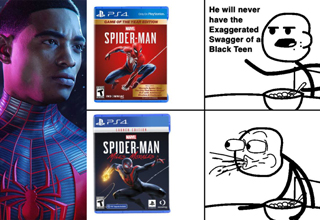 NEXT ARTICLE Can a Black Video Game Reviewer Be Racist? Gamers Say 'Yes'