Everyone wants a hot gamer girlfriend and while women have begun to plant themselves as both consumers and creators in the video game community, it can be easy to see the mirage of progress made in their steed. The gamer girl aesthetic has not helped women find their place in the gaming community but instead has capitalized on the male fetishization of women, minimizing their impact, and overshadowing their presence with pink cat headphones and push-up bras.

Scarlett, Mystik, Kasumi Chan, and Ricki Ortiz are surprisingly not the names of four characters from a Marvel spin-off on Disney+, they're the names of the four highest-paid female gamers of the last three decades.

And while you're probably more acquainted with the likes of Pokimane, Neokolul, and Belle Delphine, three women who will surely put the legitimacy of that previous statement to the test given enough time, and enough Twitch donations, you might not be familiar with how the "gamer girls" archetype came about. 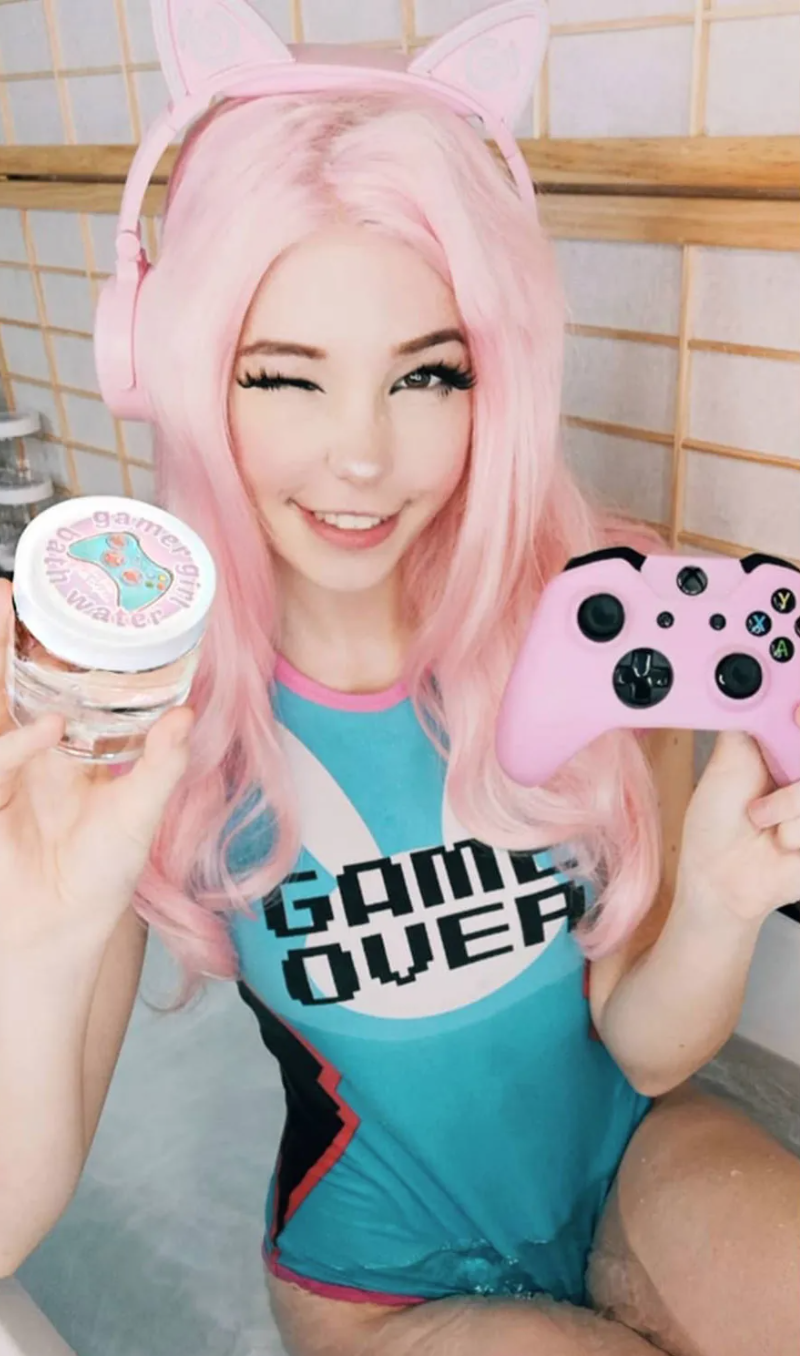 The terms “gamer girl, e-girl, gamer gf” are not new and have been in the lexicon for years, however, the archetype of the “gamer girl” has only recently become a caricature of push-up bras and pink cat headphones. The gamer girlfriend archetype was most notably capitalized on by Belle Delphine, who even sold 'gamer girl bath water', a gimmick that plastered her name all over the news and surely brought her a small fortune.

The rise of the E-Girl can be traced in part through memes as the trope is derivative of the 'goth gf' and big mommy-milky memes and thus plays off the fetishization of women taking care of men. A trope found in many memes, but most notably in PS5 secured memes. 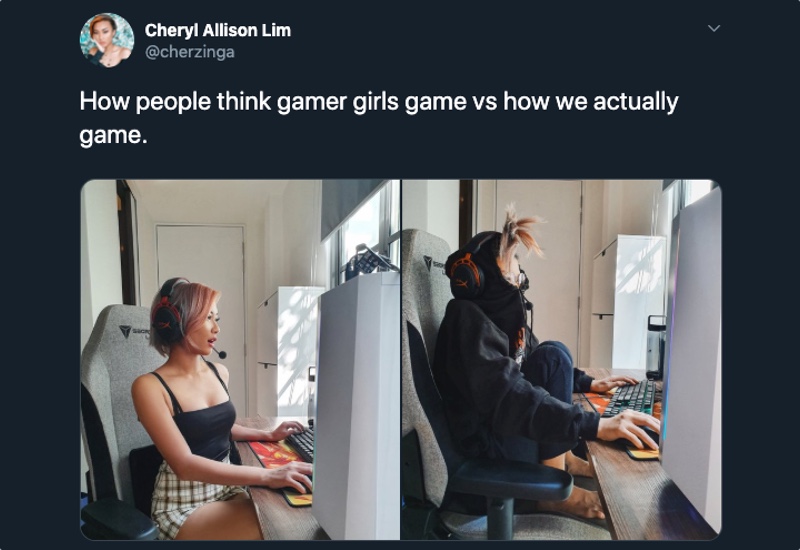 On the outside, it might seem like women have become more confident in sharing their affinity for playing video games and have begun more actively participating in virtual gaming communities. This is true, though the rise of gaming trends like cozy-core, shows not all women are playing the typical AAA titles that their male counterparts are. And while professional female gamers have all assuredly endured harassment in their line of work they have benefitted from the gaming industry, while the average “gamer girl” arguably has not.

Women are not always able to play to their likeness, as a 2020 statistic shows. Games whose lead characters are female, only makeup 18% of new titles. This percentage increased in previous years, but gender representation in video games continues to portray women characters using “traditional gender roles, sexual objectification, or stereotypes such as that of the "damsel in distress". While their male counterparts are often stereotypically depicted as big and muscular, and LGBT characters have been slow to appear in video games as a result of the heteronormativity of the medium.”

According to a global study taken of the video game industry in 2019, only 24% of video game developers were women. The organizational culture of many tech companies is not welcoming of diversity in general, regarding gender and race especially. This is not to say that all companies run in this manner. Social game developer Zynga, who created popular mobile games like Farmville and Words with Friends, boasts proudly of having a women-friendly workplace. Media outlets like CBS News postulate the lack of female developers in recent years is a direct response to the 2014 “Gamergate” controversy.

And while Gen-Z gamers may not remember GamerGate they are well versed in the dangers that come from cyberbullying and or doxxing. In short, Gamergate was an

“online harassment campaign, primarily conducted through the use of the hashtag #GamerGate, that centered on issues of sexism and anti-progressivism in video game culture. Gamergate is used as a blanket term for the controversy as well as for the harassment campaign and actions of those participating in it.”

The viewpoint of Gamergate supporters was mixed but included protecting the cultural “gamer identity” through an anti-diversity campaign labeled a “movement for ethics in games journalism”. Alone those views were not necessarily harmful but individuals who threatened to rape and kill female journalists and developers who represented the increased female pov in the gaming industry were considered to be associated with Gamergate. Targets of harassment had their online presence hacked, had rocks thrown through their windows, and were subject to other intimidation tactics.

Since then there have been many other high-profile cases of cyberbullying, cyberstalking, cyberharassment, and the use of deepfakes in cyberviolence which spawned support groups for victims and international legislation.

In the United States, cyberbullying laws vary by state and are centered around education and suicide prevention but as many as 45 states have anti-cyber harassment laws. Breaking one federal law on Interstate Communications, which bans threatening to injure another person, can cause up to five years of jail time. The same law bans threatening to injure the property or reputation of another person, with the penalty of up to two years of jail time. Another federal law protecting against Obscene or Harassing Telephone Calls regulates the communication of obscene imagery to threaten or abuse a person. Breaking this law can cost up to two years in jail or $50,000 USD. Sweden began passing federal laws against cyberbullying as early as the 1990s. 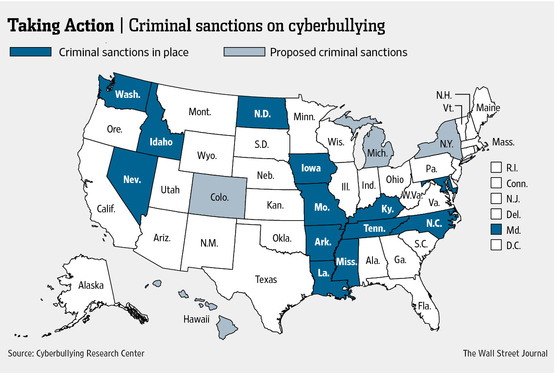 Passing legislation around preventing and punishing cyberbullying became less of a priority after 2015, as there have been very few new laws since then. Nonprofit organizations like The Cybersmile Foundation have taken things into their own hands. They partnered with mission-based games developer Pixelberry Studios to create High School Story, an anti-cyberbullying game that focused on kindness and inclusion, which raised over $300,000 USD.

It is possible that the increased inclusion and visibility of women in the gaming industry is a sign that these laws and nonprofit initiatives have succeeded. If that is true, the benefit of female gamers due to this inclusion is not more diversity initiatives in game development/higher-paying roles in those companies and not being able to play as less stereotypical characters, but only having less chance of being threatened online.